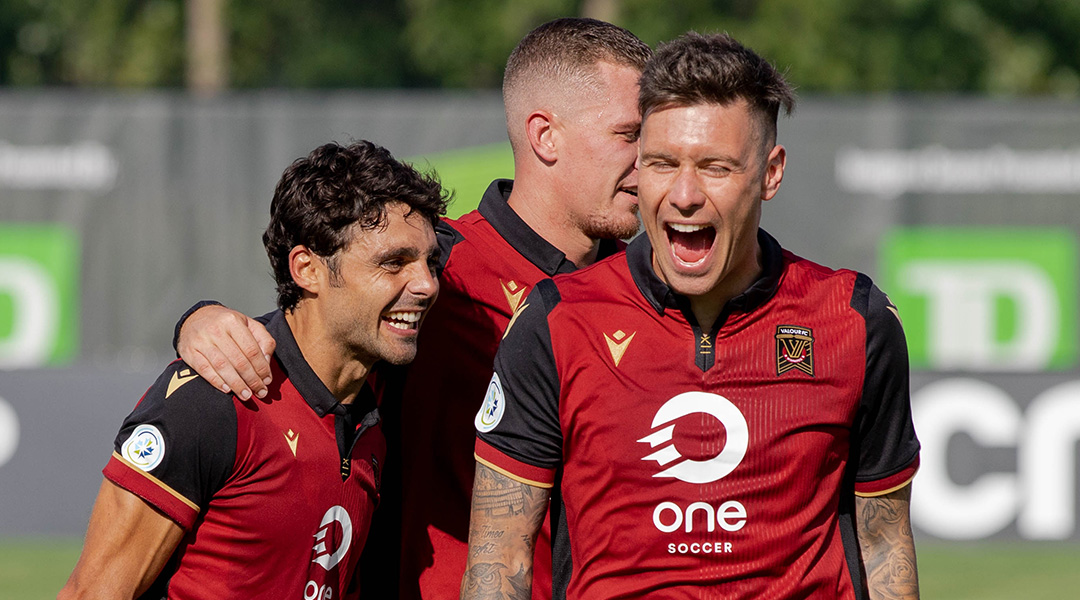 When 33-year-old striker Michele Paolucci was announced by Valour FC, there was plenty of discussion regarding the high pedigree of the former Italy U-21 player: he was a product of the famous Juventus Academy, accumulating nearly a hundred Serie A appearances before spending the bulk of his career in Italy’s lower divisions after four seasons of top flight action.

The veteran striker arrived in the fall season transfer window alongside journeyman midfielder Jose Galan, and both were put to task fairly quickly. Paolucci would go on to contribute three goals and two assists for the Winnipeg-based club after fifteen appearances, a return he says he’s happy with in a recent interview with MLS Soccer Italia:

Personally I could have scored a little more but I managed to score a few goals, I made several assists and in the games we won I was always decisive. I am happy with my score because I have not kicked penalties. That always makes the difference for a striker.

Having arrived in mid-July, Paolucci featured in the matchday squad for 17 different games, giving him ample time to take in the atmosphere from coast-to-coast and get a feel for the level of the game in Canada. With the Canadian Premier League having just gone though its inaugural season, Paolucci is acutely aware that the the freshly-assembled teams have room to grow when it comes to tactical cohesiveness:

Canadian Premier League is a growing championship where there are good players, where the tactical level, being a new league, cannot be extreme yet. But there are good players, good individuals. For example the strongest teams like Forge and Cavalry have been playing together for a long time, especially these clubs have a different mentality, they aim to win, from this point of view they are very similar to European teams.

The striker earmarked Kyle Bekker as a standout player, calling him a total player who has room in the engine for both attacking and defending. To Paolucci, the Forge FC Captain – who is up for Player Of The Year – has something more than most.


Paolucci was also left impressed by the organization of the league and how it presents itself, even if he does find that league officials step in the way of club operations too much:

Certainly the Canadian Premier League can enjoy the advantage that soccer, at a professional level, is something new, it is an evolving sport so it has the possibility to start from scratch. What I’ve noticed is that in Canada, like in the United States, a sporting event is a show and this is very beautiful. Also in terms of communication and organization, Canadian Premier League is at the forefront. On the other hand, I realize that for clubs it is a bit oppressive to have to report every single thing to the League that wants to have control over everything. This thing, it seems to me, can be problematic for clubs.

Michele’s international teammate Jose Galan had commented that the rumoured international rules were ‘discriminatory and anti-freedom’, though he has since removed the comment from Twitter. Recently, Halifax Wanderers President Derek Martin wished that the league would get ahead of rumours like these instead of allowing speculation to mount.


Whatever does end up happening regarding any potential roster changes, it appears Paolucci will still be with the club next season: while Valour FC didn’t indicate the length of Paolucci’s contract when it signed him, the striker himself broached the subject in his interview. He says that part of what intrigued him about signing with Valour FC was an eighteen-month long contract that will expire in December 2020, which means fans can likely expect him to stay for the club’s second season unless he and Rob Gale mutually decide to part ways.

My intention is to stay, also because I consider my growth path and that of the team still not complete and so my desire is to continue to Canada and respect my contract. Canada is a place where you can still dream, it is a fertile country from many points of view, it is on the other side of the world, but there are many Italians who make you feel at home. I hope to continue my career in Canada and I hope to have so many successes with Valor. When I left to return [to Italy] after the end of the championship, I received so many messages of affection from the fans and professionals in Canada. It means that I have worked well and I am very pleased but I hope to improve again next season.

To that end, Paolucci and his family are enjoying life in Canada, with the striker saying that he’s now quite enamored with the Winnipeg Jets and hockey in general.


He also touched on the multiculturalism of Canada, stating that the country left with him the impression that people of various backgrounds feel part of something great, regardless of where they come from (or whatever controversy surrounds Don Cherry, we suppose).

Canada is a multicultural country and integration is the foundation of society. This is a beautiful thing and the latest events related to racism in Italy do not take place in Canada.

What I have also recommended to young Canadian footballers is that this reality really needs a change of mentality because I realize that at this moment we are a million light years away from Europe in terms of professionalism and mentality, which are those things that make the difference because talent can be born anywhere, but creating clubs where front office, staff and players have only one goal, that have football as the only reason for living, is still difficult to find in Canada. I believe that the league must work on this goal, encouraging European players who have already accumulated experience to come to this league to help grow young local athletes.

It’s unclear what domestic talent will be back for Valour FC next season: the official CPL roster tracker lists Calum Ferguson as having been quietly released (he’s now with Canterbury United), while Dylan Sacramento is currently on loan with Hawke’s Bay United in New Zealand.

The recent CPL-U SPORTS Draft saw Gale select two more attacking options via Cape Breton University players Marcus Campanile and Charlie Waters, both of whom have academy experience overseas. While neither are Canadian, as draft selections they wouldn’t occupy an international slot for this season if they get contracts. They will trial with the club when preseason begins in early 2020.


Intent to stick around, Paolucci is sure that he can help improve a Valour FC side that finished last in the short spring season and fifth place in the fall, four points shy of being level on points with third-placed York9 FC. Gale believes that referee errors ultimately cost him the spot.

The club conceded a league-high 52 goals across the inaugural campaign, finishing with a goal difference of -22. A league record 8-0 loss to Cavalry FC exemplified Gale’s need for new defensive recruitments, so fans can likely expect some turnover there, too.