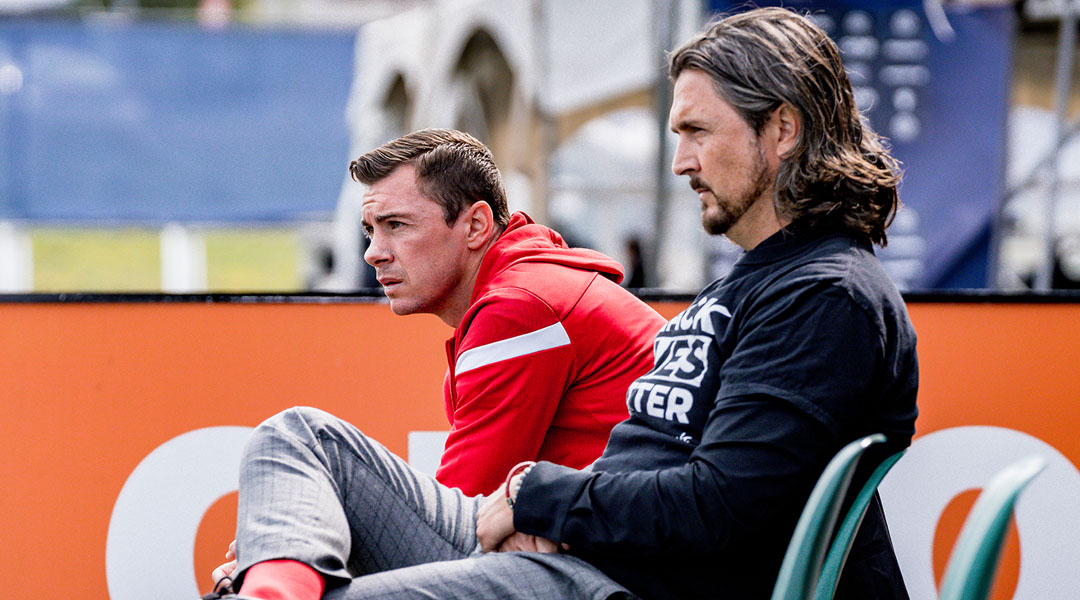 Cavalry FC Captain Nik Ledgewood recently re-signed for a third year with the Alberta-based side, with the 36-year-old looking forward to leading the team through what he hopes will be a full-length season with home markets and fans in the stands.

The Cavalry Captain has made a big impression at the club over the last two years, contributing four goals across thirty appearances and being described as a big backbone of the club’s culture. Ledgerwood’s side has topped the regular season across both Canadian Premier League campaigns, but ultimately fell short of securing any silverware at the tail end of each season.

The first year saw a Joel Waterman red card in a two-legged CPL Final leave Cavalry FC chasing its opposition, with Ledgerwood stating that the side just missed out on a spark of brilliance to put themselves back into it. At The Island Games, the club struggled with a multitude of injuries that saw Tofa Fakunle, who was part of the technical staff, selected as a member of the matchday squad.

Discussing this occasion led to his thoughts on the realities of a growing league that’s clearly making great strides for the domestic game, but is still finding its footing in some aspects of professional life.

Cavalry wasn’t the only team forced to make eyebrow-raising roster additions in the midst of the bubble tournament, with the Halifax Wanderers needing to register goalkeeper coach Jan Michael-Williams as a player following a knock to Christian Oxner at the start of the tournament, and York United dipping into a local emergency pool to call university athlete Evan Couturier to the bench. Even in 2019, Cavalry FC once named goalkeeper coach Jordian Santiago to the matchday squad for an Al Classico bout.

These are growing pains, Ledgerwood suggests, that are the reality of a salary cap league that he hopes to see grow in terms of both budget and, at some point, unionized representation.

If you look down the bench and all of the sudden we’re putting a player who’s part-time team manager on the field, that’s the reality of what the CPL is right now. It’s still in its growth stages and it’s growing, and hopefully soon that salary cap will increase, there will be a player’s union involved, and you can see the transformation of this league really turning into that domestic professional league that every player hopes for.

With Cavalry FC having parted ways with nine players so far as it prepares for its third season in the Canadian Premier League, the side is presently in the midst of its biggest rebuild yet. Touching on the subject of turnover in CPL sides across the league, Ledgerwood advocates that clubs should demonstrate more patience with first year professionals and international signings, many of whom arrive on short term contracts and find themselves released after little time to settle and impress.

You also have to give a certain amount of time to players to build that trust and make sure they’re comfortable in that environment and that they can prove their worth. You’re bringing in foreign players where you want them at the time, and if they don’t perform in a year now you’re letting them go. It takes time for foreigners to get accustomed to what the CPL is, the living in Canada, the language. I think there needs to be an aspect of patience with players.

Between the time the inaugural Canadian Premier League season ended and the Island Games began, just upwards of 70 athletes saw themselves either released, involved in intra-league moves, or had their contracts terminated by CPL sides to allow for a move elsewhere. Not all of these players have found themselves back in the professional game, with players like Daniel Gogarty and Justin Springer having now hung up their playing boots.

A lot of these players are playing their first years of professional soccer, with the travels, the pressure, the professionalism that’s asked of them. To have a big turnover year-over-year, it’s going to hurt a lot of clubs, and you can see it. Edmonton had a very big turnover before The Island Games, Winnipeg a very big turnover, and they didn’t do very well, so there’s a lot of risk in that.

While many had praised Valour FC for a much-improved defensive performance, finishing bottom half of the table evidently didn’t meet the marker for success for Cavalry’s Captain. While the Winnipeg-based side has opted to keep a good portion of its core roster together heading into the current season, FC Edmonton has found itself in in the midst of another one of those significant rebuilds Ledgerwood remains cautious about.

While York United fans are riding high after the news that Dominick Zator has joined alongside the likes of Chrisnovic N’sa and former Cavalry goalkeeper Niko Giantsopoulos, the side will be relying on a contingent of new internationals set for their first year in the CPL and a lot of young domestic talent (the side’s average age is just about 22). Without much of an existing core to build from, however, Ledgerwood believes they’ll be in for a tough campaign.

I think teams like York, who are doing a complete revamp of their team, I think they’re going to struggle. You don’t have that core group of players and you need to learn everything from the beginning. You need to make sure everyone is on the same track as far as tactics, team culture, values, all of that. Whereas if you have 50-60% of the core players already there, you’ve already done that work with them and you’re bringing in some foreigners and other players you’ve missed out on, and you can more easily add them to the group.

That being said, Ledgerwood did offer the flip side of the coin, recognizing that the Halifax Wanderers had a massive turnover with Stephen Hart building a mostly-new squad that went on to reach a CPL Final. It’s certainly possible with the right players, he says, but likely to be an outlier. As he puts it, the quick turnover is almost never beneficial in the long run.

While how the 2021 Canadian Premier League season ultimately unfolds remains to be seen, it’ll be interesting to watch how Canada’s top flight professional league grows over time. While the COVID-19 pandemic has evidently pushed back on this progress, the return to normalcy post-pandemic will likely see a much-needed economic boom, with an increased Champions League presence in 2023 and a 2026 World Cup likely set to bring plenty of new eyes to the league, too.

In regards to Ledgerwood’s hope of union representation, the league has remained quiet on the subject beyond league commissioner David Clanachan stating that there had been no discussions due to the pandemic last August, though he did suggest that those talks will come in 2021:

I don’t have an opinion at this point in time, one way or the other. We’ll deal with that, we’ll get through this year that no one saw coming, and then we’ll move on from there and we’ll do the right thing.

It also remains to be seen if the league will once again reduce staff and player salaries as it had during the pandemic, a decision which will likely be determined by whether gate revenue is a possibility across the 2021 Canadian Premier League season. There’s also been whispers of some club pushback on the newly-revealed four international player minimum roster requirement, though without a union it’s not clear what can ultimately be done.

Whatever unfolds, Ledgerwood is hoping that the CPL will continue to grow and offer professional playing opportunities on a scale that he never thought would be possible back when he first left to play abroad.

It’s something that I wish I had as a kid growing up, where you could get behind a team and support it and see a pathway. I think that’s the biggest thing for younger athletes now, is that there’s a pathway and it’s not just university, MLS, or overseas. There’s now eight more teams across Canada where these younger players can look to be involved in, and I can only imagine that in the next five years more CPL teams will join and they’ll have academies linked with them. It’ll help before the World Cup in 2026 to take advantage of it, to have a very professional domestic league is going to be our ultimate goal.

Ledgerwood is currently on a one year contract with Cavalry FC. The financial details of it were not disclosed by Cavalry FC.