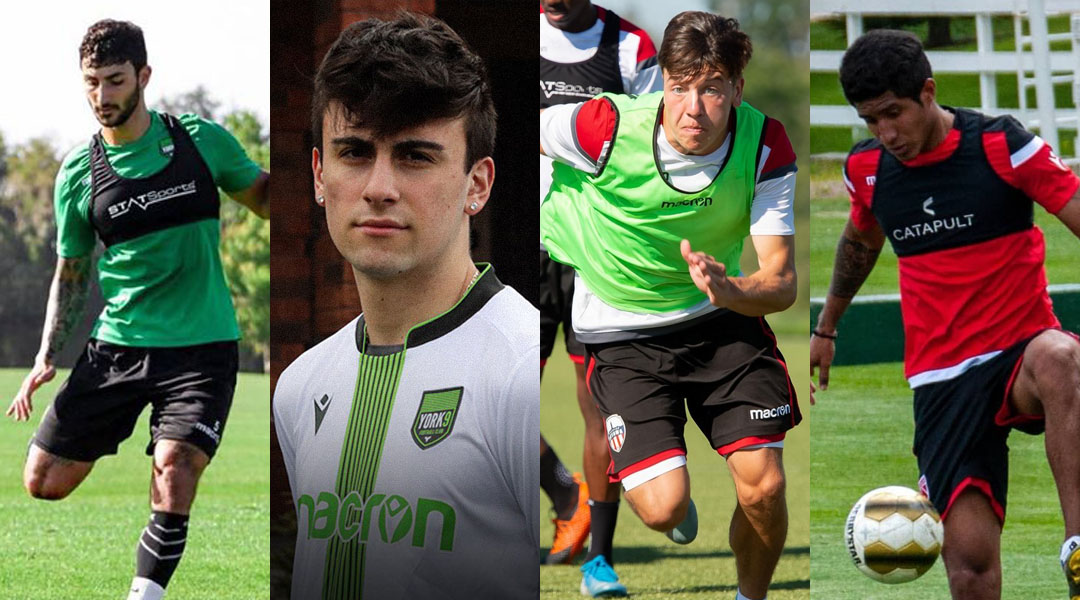 With the 2020 Canadian Premier League season now halfway finished, players both new and old have no had time to impress in the Charlottetown-based tournament. We’ve seen inaugural season players like Joseph Di Chiara, Jordan Brown, and Akeem Garcia take flight, while newcomers like Joao Morelli, Javier Acuna, and Mohamed Farsi have made headlines, too.

Still, for every player getting their opportunity, that means there’s another who isn’t (of course, sometimes players are sidelined due to situations beyond their control). Here’s a quick look at four outfield players who haven’t had a chance to shine yet, but are certainly worth keeping an eye on:

The former Ottawa Fury centre midfielder suffered a knock at the beginning of the Island Games and has been forced to watch the Nine Stripes from the sidelines so far. Mannella was a regular sight for the Fury, making 67 appearances for the USL side and impressing with both his passing vision and ability to help defensively when needed.

Brennan had stated that his qualities would help the side move the ball forward, and that’s something he admitted the sided needed some further work on: while players were making good runs, he said, sometimes the delivery just wasn’t as sharp as it needed to be.

With the York9 FC midfield featuring plenty of tough competition (expect Joseph Di Chiara and Manny Aparicio to be mainstays), it’ll be interesting to see how Mannella slots into the Nine Stripes engine room when he’s fit to play.

Cavalry FC signed the Peruvian forward as a successor to Congelese international Dominique Malonga, who left the CPL runners-up for Bulgarian side Lokomotiv Plovdiv. Like Mannella, an injury has kept Cordova sidelined for the tournament so far, but that hasn’t slowed down Tommy Wheeldon Jr.’s side at all: the club currently sits top of the table with a healthy eight goal return from four games, with nearly half of those coming from Jordan Brown.

Still, Cordova is expected to be a big boost when he has a chance to play: Wheeldon Jr. has praised his clever touches and consistent goalscoring record, with the 24-year-old having finished as the top scorer in Peru’s second division on two different seasons.

The 18-year-old attacking winger was picked up by expansion side Atletico Ottawa a few weeks after we broke that he was training with the team, and he arrived with great pedigree for a youngster: the left winger previously plied his trade for the Whitecaps U-19 team, scoring against Sacramento Republic in a 2-1 exhibition victory back in March.

Prior to that, he massively impressed at the OPDL level with Ottawa South United, where he scored 44 goals in just 20 games for the side before the Whitecaps invited him over to the west coast. The left side of the pitch has been in good hands (or feet) for Atletico Ottawa so far, with full-back Vashon Neufville combining well with the likes of Ben Fisk and Javier Acuna, so there’s a lot of talent ahead of the youngster.

The seventeen-year-old signed a multi-year deal with the Nine Stripes this May, with the former TFC Academy product still awaiting his professional debut under club gaffer Jim Brennan. With the head coach recently expressing his belief in the club’s teenage contingent, one feels that Altobelli will get at least a few minutes out on the pitch in the latter half of the season. With seven appearances made for the Canada U-17 side so far, it’ll be interesting to see how he performs in top flight club football.

Of course, there are several other outfield players who have yet to get playing time this year too: Abdoulaye Samake (Pacific FC), Luke Green (Halifax Wanderers) Yohan Le Bourhis and Chakib Hocine (Valour FC), and Michel Djaozandry (Atletico Ottawa) have yet to get an opportunity, but with the five substitution rule allowing for coaches to make bigger changes it’ll be interesting to see if that changes as the regular season goes on.

For those keeping count, that means that FC Edmonton, Forge FC, and Cavalry FC are the the only clubs who have used every available healthy outfield player so far, with each club deploying heavy rotation to minimize fatigue from the compacted Island Games schedule.