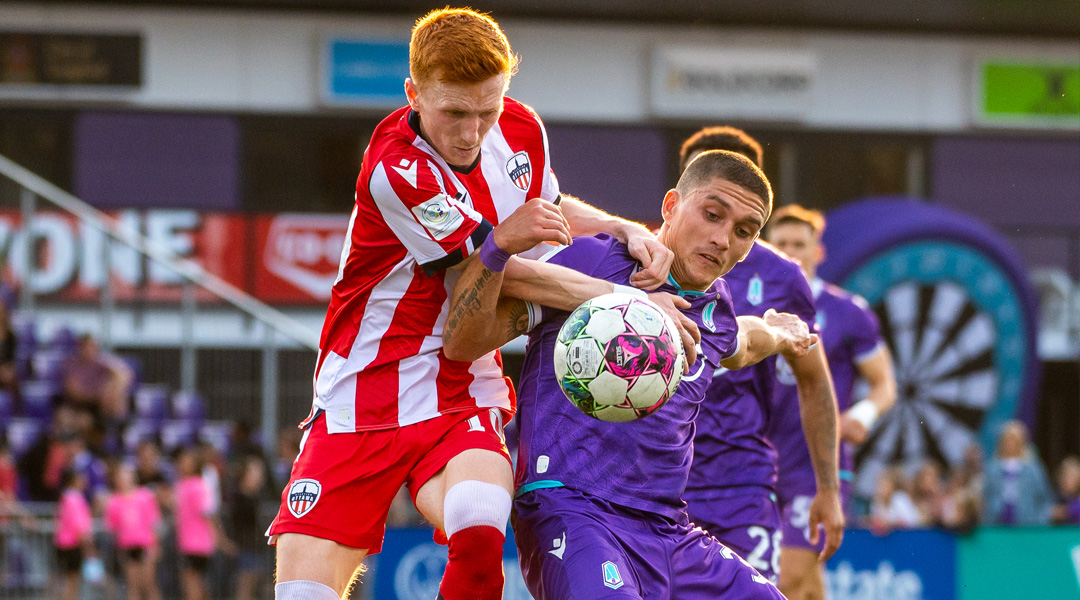 Atletico Ottawa already went from last place in 2021 to the regular season title in 2022. Now, Atletico Ottawa is 90 minutes away from a first ever CPL final.

Carlos Gonzalez’s side put in a disciplined performance to defeat Pacific 2-0 away to give themselves a massive advantage going into the decider. Both goals came in the second half, which did the trick in the end.

Neither team started with their captain in this one, as both occupied places on their respective benches. For Pacific, they surprised many by starting Kamron Habibullah up front instead of Jordan Brown. Ottawa also opted for Brian Wright over Malcolm Shaw as their striker.

See Also: Jordan Brown On His Full-Circle Return To CPL

The first half created less chances for either side, with Pacific carrying the match as expected. The first 20 minutes produced little of note regarding big chances aside from a Bustos blast right from the get-go. Things did pick up at the half hour mark as the sides traded big chances in the space of a minute. Abdoul Sissoko struck the post with a blazing shot that gave Callum Irving no chance. Pacific went the other way, looking very dangerous with the counter, but they could not get a shot across.

Neither club had a shot on target in the opening 45, highlighting the importance of not going down a goal in this two-legged tie. The first shot on target came immediately in the second half as Marco Bustos forced a save from Nathan Ingham. Pacific continued to probe and create chances, but the Ottawa goalkeeper was equal to every single one.

Yellow cards became a theme throughout the second stanza, with six of the game’s seven cautions coming in the latter half. Among the players booked was Diego Espejo. As the Ottawa center back was booked seven times in the regular season, his eighth yellow tonight means he will miss out on next weekend’s return leg.

The visitors hit the front foot with 10 minutes to play: after the ball was played forward, Ollie Bassett knocked the ball forward to Tabla, who shot the ball over Irving’s head and into the open net. That gave Ottawa the goal they needed.

James Merriman immediately went to his bench, bringing on Jordan Brown and skipper Jamar Dixon. It was the latter’s final home game before his retirement at season’s end. Pacific continued to push and get an equalizer, but their guests were excellent at holding onto the ball and killing time.

The dagger came in stoppage time, giving Ottawa a priceless second goal to take home. It was an excellent counter attack, the ball ultimately falling to Zach Verhoven. The substitute fired the ball home, with a mean deflection from Nathan Mavila which helped divert it past Irving.

That was the final goal of the match, with the Pacific players evidently deflated after conceding the second one. Coach Merriman lamented on his team’s inability to properly create and finish their chances in the match. He believed that they lost the match themselves more so than Ottawa doing anything special to get the win.

On the loss of Espejo for the home leg, Gonzalez does not see it a big issue, stating that he’s prepared to make the necessary changes. The Spaniard also mentioned that the games between his side and Pacific were always close ones, so he kept the gameplan the same and this time it went their way.

This was Atletico Ottawa’s first ever win at Westhills Stadium, and will get the chance to reach their maiden CPL final next Sunday. Kickoff from TD Place will be at 14:00 ET, 11:00 PT. The defending champions have their backs against the walls. Let’s see if they will be able to work some more magic.