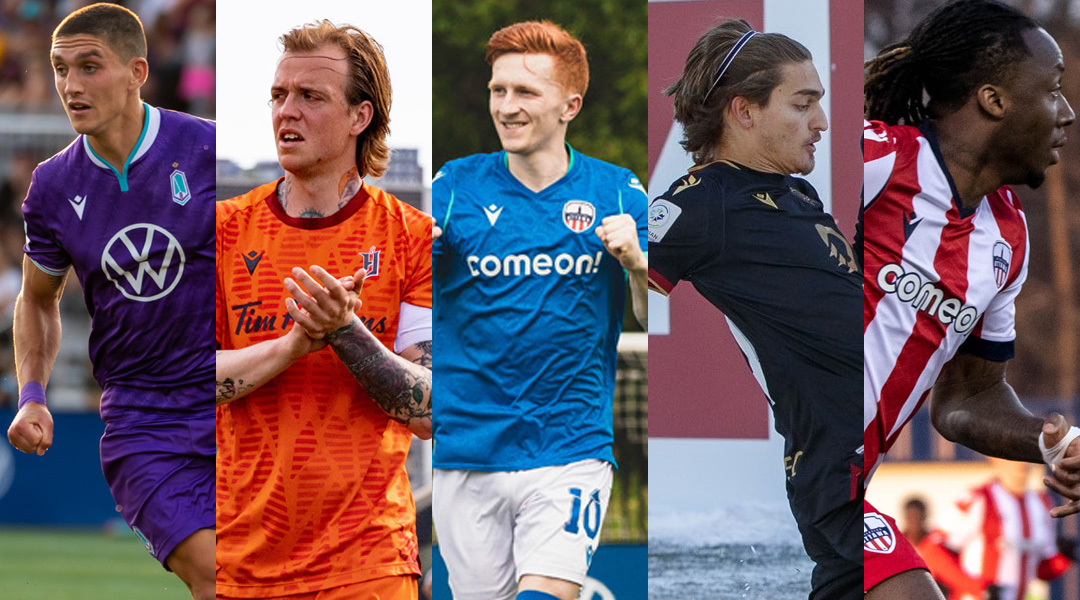 There are five nominees in the running for the Canadian Premier League’s Player Of The Year award, but only one of them is going to carry home a soapstone carving.

Here’s how each of them contributed to their team this year:

Having also been nominated for defender of the year, Forge’s steadfast man in orange has proven to an absolute anchor for the hammers: thrust into a centre-back role following the long-term injury of Daniel Krutzen, defensive midfielder Alexander Achinioti-Jonsson has proven to a league-leading centre-back in addition to his usual duties, too.

Excelling in the position, Forge’s sizeable Swede had plenty of on-the-ball influence, leading the league in passes with 2,057 – well ahead of the runner-up’s 1,653. He helped Forge concede the last goals out of any team (again, as a defensive-midfielder-turned-centre-back) and proved pivotal as the two-time champions continued their perfect playoff appearance record.

Manny’s second year at Pacific has seen him cement himself as one of the league’s best attack-minded midfielders: he draws players in and he knows how to cut passes, landing himself in the top percentiles for deep progressions and xG buildup.

When the 26-year-old is on the park, the club’s attack is tiers better, though his two goals and three assists perhaps understate his influence.

Still, it’s clear that the Tridents are noticeably different when he’s there versus when he isn’t. That leads in to perhaps his biggest detractor for the award: with two suspensions and an injury spell, his 17 appearances are the least out of any nominee.

Welcome to ‘Olliewood’: Atletico Ottawa’s star midfielder has contributed an astounding eight goals in 27 appearances this year, scoring against every single other team in the league – and that’s as a midfielder, mind you.

Bassett’s stellar campaign helped Atletico Ottawa go from worst to first, finishing atop the league standings. The influence the 24-year-old has in the middle of the park is substantial, as is his passing vision and, obviously, his eye for goal. All-told, he’s the expected favourite of the group.

That’s not bad for someone who had dropped out of the professional game prior to his chapter in the CPL.

Sean Rea’s presence in the Canadian Premier League has been a joy to watch, and he’s surely destined for somewhere higher. The CF Montreal loanee is already a favourite for the Best Under 21 Canadian award, but he’s a good shout for player of the year, too.

The 20-year-old led the entire league in assists with nine, contributing an astounding five goals on top of that – and a few of them were absolute bangers, too. He’s clearly at the top when it comes to passing vision in the league, and we expect that his playoff-winning parent club has taken notice.

Whether he returns to them with award(s) in hand is what remains to be seen.

When the nation’s capital inked former Barcelona prospect Ballou Tabla on a three-year deal, the big question was if that faith was well-placed. Tabla’s quick feet and dazzling attack have locked that in to a resounding yes, with the 23-year-old accruing six goals and four assists through the club’s table-topping regular season.

Make no mistake about it: Ballou is an absolute diamond for Atletico Ottawa, and his fierce attacking rate has haunted many a defender throughout the league. Atletico Ottawa’s second nominee in the category absolutely deserves to be here.

The Canadian Premier League has slow-dripped the nominations for all but one of its awards now, with yesterday seeing the coach of the year selections revealed.

The league had previously revealed the Best Under 21 Canadian Player Of The Year award and the Golden Glove nominees, along with an all new award for defender of the year, too. The last selection category to show will be another new one in the Players’ Player Of The Year Award.