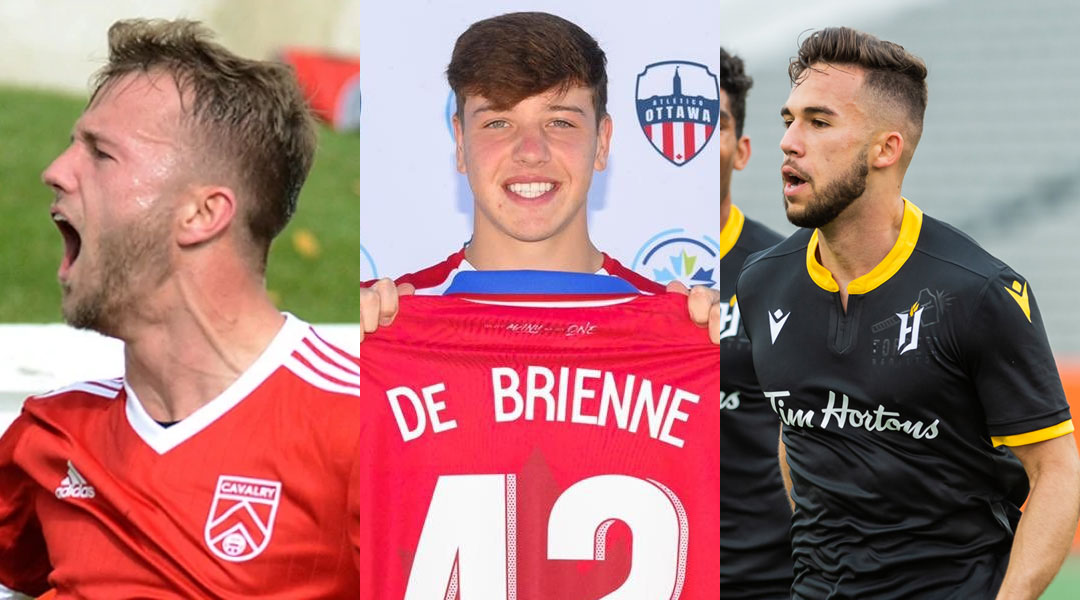 With the fourth Canadian Premier League season expected to begin just a few months, there are still several clubs who have kept the bulk of their roster moves close to their chest.

With the transfer season already providing plenty of drama this year, we wanted to take a look at some former Canadian Premier League athletes who we feel deserve a new opportunity in the burgeoning domestic league.

Without further ado, here’s five CPL athletes who left after the 2019 or 2020 seasons who we’d love to see back:

The first two Canadian Premier League seasons saw Lethbridge native Nico Pasquotti cement himself as one of the most established forwards in the league: he helped Cavalry FC finish top of the league in both of those seasons, and had recorded five goals and eight assists for the Alberta-based side by the time he suffered a season-ending ACL and meniscal injury during the shortened Island Games tournament in 2020.

See Also: ‘A Hard Pill To Swallow:’ Pasquotti On His Injury And An ‘Uneasy’ Feeling

Having completed a long rehabilitation process that was extended due to a cyclops lesion which required a secondary surgery, the 26-year-old is now keen to get back on the pitch next season – though it’s the where that remains in question.

Beyond his pace, trickery, and a keen eye to create goalscoring opportunities, the 26-year-old also happens to be the best long throw-in taker in the league, which brings a unique element to his attacking game.

At time of his injury, nobody had clocked in more minutes for Tommy Wheeldon Jr. than Nico Pasquotti. While it’d be easy to envision Cavalry bringing the midfielder back into the fold, it also wouldn’t be surprising to see a side like FC Edmonton or Atletico Ottawa – who both needed more options going forward last year – take a look at the winger. He’d been talking to other CPL sides before signing a one year deal with Cavalry in 2020, which indicates that he’d likely be open to a move.

Two-time Canadian Premier League winner Kadell Thomas has a lot to offer: the Brampton-born midfielder established himself well at the professional level after arriving through Forge’s talent pipeline with Sigma FC, with the midfielder showing good technical ability and good returns as an impact substitute.

His two seasons in orange saw him make thirty-two appearances for the hammers, contributing three goals and two assists. He made club history by scoring Forge’s first-ever goal, while also bagging perhaps one of the league’s most well-known goals of all time:

Thomas returned to League1 Ontario side Sigma FC last year, where he made four appearances for the feeder club. While players like Klaidi Cela were essentially called up and down, it wasn’t meant to be for Thomas – which could make him an interesting option elsewhere.

While Jace Kotsopoulos departed the CPL for League1 Ontario, it’s no secret that the 23-year-old clearly has the talent to play at the professional level. Though he only saw 190 minutes through five substitute appearances for the hammers, he became one of the league’s youngest goalscorers and helped the side secure Concacaf League qualification by scoring during a late-game comeback against Valour FC.

After finishing his time at Guelph University with a prolific return ratio of 58 goals in just 61 appearances, Kotsopoulos returned to the Canadian Premier League level as a last-minute addition for York United ahead of The Island Games. He became the first player to cross 905 Derby lines, but only made one substitute appearance against Valour FC during his time in PEI.

Least season saw him named as the inaugural signing for League1 Ontario expansion side Guelph United, where he quickly affirmed himself to be a level above the semi-professional league: Kotsopoulos proved a nightmare for L1O defenses, scoring 18 goals in 14 appearances as he led the side to a League1 Ontario championship in its inaugural season.

“I never really felt like I got a fair chance [in the CPL], so I thought I’d take a step back to take a step forward,” he said of the move.

At face value, he’s a forward who is clearly well above the semi-professional level, and seemed to have done well during his first steps in the CPL. We feel he’s more than deserving of a new opportunity in the domestic professional league should he want it.

Former Atletico Ottawa midfielder Matteo de Brienne has significant moment behind him, with Atletico Ottawa fans quite keen to see the side take another look at the Nepean, Ontario-born youngster.

Matteo proved prolific with Ottawa South United as the youth level, scoring an astounding 44 goals in 20 games for the side en route to an OPDL Championship win in 2015. The hot form saw the left winger signed to the Whitecaps Residency program, where he progressed up to the U-19 level before inking a deal with Atletico Ottawa following a short trial in 2020.

Unfortunately for Matteo, former Atletico Ottawa head coach Mista wasn’t open to a lot of roster flexibility at the seven-game shortened season, with the youngster departing without receiving any minutes. The 2021 season saw him land with FC Manitoba before he turned out for the Carleton Ravens, where he once again proved to have quite the eye for goal:

It’s worth noting that the original list of draft-eligible athletes published by U SPORTS contained Matteo, though an update a few minutes later removed him from the list. While we can only hope that’s because he’s inked a deal with a CPL side already, it remains to be seen what’s next for the 19-year-old.

The following season saw the youngster land back in Canada with PLSQ side Mont-Royale Outremont, where he helped the semi-professional side to its fourth-ever league title with three games to spare.

His time in the CPL two years prior showed he had the technical ability, though physically he found himself a bit bullied around the pitch. It’s easy to forget that he was just 19 years old at the time, however, and at 21 he’s now had time to develop his physical side. Legault would arrive as a low-risk, high-reward type of signing should he get another chance at the professional level.

It’s also no secret that players like Malyk Hamilton or Aboubacar Sissoko would be positive returns after spending time in the USL, though there’s no telling where those athletes might land next. Fringe CPL players like Jordan Dunstan, Yohan Le Bourhis, or CPL journeyman Duran Lee (who missed the 2021 season through injury) could prove to be decent fill-ins where needed, too.

Next week’s 2022 CPL-U SPORTS Draft will also feature a number of players who have trained or played in the domestic profession league before, with the likes of Luke Green, Syvatic Artemenko, Raphael Garcia, Aliz Yildiz, and Horace Patient Sobze Zemo all eligible for selection.

It’s likely we will see athletes like Kareem Sow and Chris Lee retained by the clubs who had selected them in last year’s draft, though it remains to be seen which youngsters will ultimately return.

With the Canadian Premier League now set to undergo its fourth season, there’s a growing number of potential returnees who could still make a splash in domestic action – and with three tentative expansion clubs on the horizon, there’s a growing amount of roster spots to come in the next few years, too.

Who do you think deserves a new chance in the CPL?