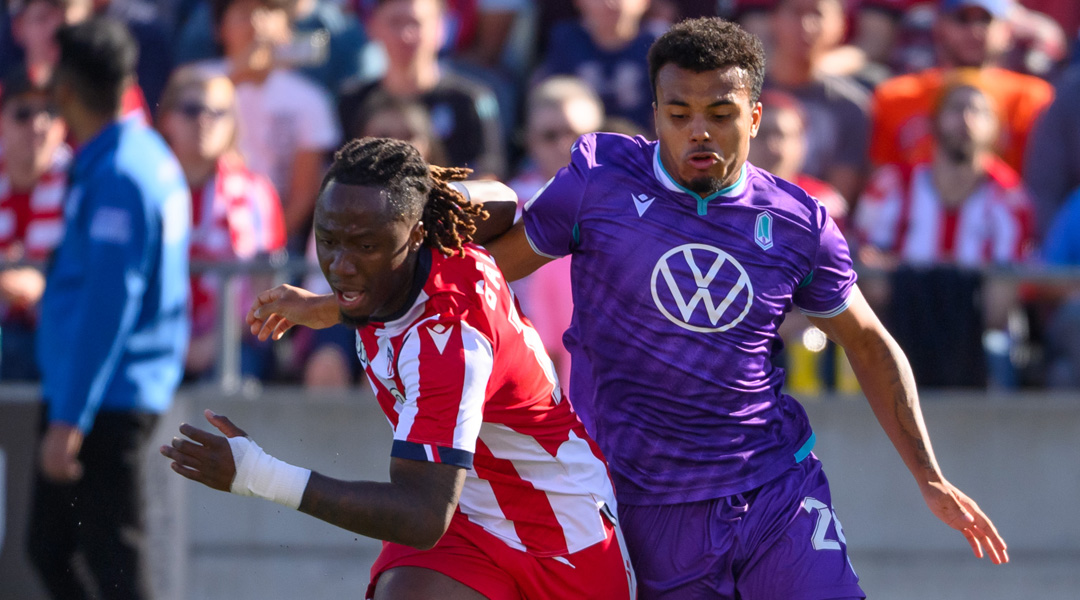 Canada’s capital for its first taste of playoff soccer since Ottawa Fury’s swan song in 2019, with Atletico Ottawa ushering in a new chapter of sporting history at a rapturous TD Place this sunny afternoon.

A crowd of about 10,000 took to the scene to take in Atletico Ottawa’s second leg against Pacific, with the hosts carrying in a two-nil aggregate goal advantage after a big away win last weekend.

Both sides had a flurry of chances on the night, with Atletico Ottawa marching on to the final despite some nervy moments Pacific pulled one back. With Shaw giving the side a late insurance goal, the capital city club will also host next weekend’s CPL Final.

Here’s how it all went down:

Buoyed on by a rapturous home crowd, Ballou Tabla nearly scored his second playoff goal just a minute in a half into the fixture, finding a lane in the middle and blasting one just wide of an outstretched Irving.

The opening minutes saw Atletico Ottawa look dangerous on the counter, with the squad quickly falling back into a low block while out of possession. Haworth skied a good opportunity on the right flank moments later, but then Pacific – whom Manny Aparicio said would come in guns-blazing – started to rev their own engines, too.

Pacific earned their first corner after Heard made a great in-the-box layoff to Whitecaps loanee Kamron Habibullah, who’s effort careened off a defender to force a corner. There came another great chance, with a ferocious header from Amer Didic forcing a great savie from Nathan Ingham.

A goal there would have changed the shape of the game, but Ingham – who made several stops in the first leg – showed why he’s a favourite for the golden glove. As Pacific pressed, Atletico Ottawa were only too happy to exploit the space which opened up, with the club’s counter-attacks causing multiple moments of worry at the opposite end.

Then, it happened: a remarkable run from Bustos saw him drive between five defenders before loosing a shot that forced Ingham into a save. Pacific capitalized on the set piece after former Ottawa Fury defender Thomas Meilleur-Giguere escaped his marker, heading home a big goal to put Pacific within touching distance of an equalizer.

Atletico Ottawa’s low block shouldered wave after wave of an increasingly forward Pacific onslaught after that before the club nearly capitalized on an opportunity at the tail end of the first half, but MVP favourite Ollie Bassett had a rare whiff on the ball within the box after some fantastic buildup from Tabla.

Both sides dipped into the bench to start the second half, with Atletico Ottawa bringing on Malcom Shaw for Brian Wright, whilst the visitors made an attacking change by bringing on English striker Jordan Brown for Cedric Toussaint.

Shaw’s first opportunity didn’t take long to come, with another magnificent run from Ballou Tabla seeing the attacker drive in against two defenders all the way from the halfway point before laying it off, though the resulting shot was blocked.

His opposite substitute Jordan Brown would then come inches away from tapping in an equalizer after a Kunle Dada-Luke snuck in a low cross, but the ball got caught between his feet as he tangled with two defenders – the second time he’d have an near-miss opportunity through both legs.

The hosts nearly put themselves up front Mavila lost possession in his own box, with a quick layoff from Shaw seeing Tabla curl it just wide. Moments later, Bustos forced another big stop from Ingham at the other end – the game was bursting wide open into a battle of wits between one side that knew it had to score, and another who’s game plan tonight was always going to be striking on the counter.

Pacific looked certain for an equalizer after a double-save situation from Ingham saw Brown once again denied from about a foot out, with Ingham back and ready for the follow-up moments later.

There gameplay came to a stop after Drew Beckie and Miguel Acosta clashed heads during that moment. With Becklie having come in as today’s replacement for the suspended Diego Espejo, Ottawa had to bring on 19-year-old Zachary Roy to replace him.

Pacific ought to have secured their equalizer minutes later, with Meilleur-Giguere catching a big deflection within the box but firing high in a one-on-one. With fifteen minutes to go, Merriman made his third attacking substitution of the night in search for his equalizer.

Sergio Camus nearly produced a moment of magic through an overhead kick that would have settled things, marking the second bicycle kick attempt on a night that saw plenty of individual brilliance from both sides.

The killing blow came eight minutes from time after another Atletico Ottawa counter saw Malcom Shaw at the edge of the box, with the striker teeing himself up before blasting in a stellar shot to put the game out of reach.

The Canadian Premier League playoff match devolved into a multi-player melee after that, which is something that has happened with alarming regularity in the domestic league. Shaw would earn a yellow for his push that started the altercation.

Minutes later, however, that heated moment would be replaced by jubilation for Atletico Ottawa: the crowd at TD Place erupted into celebrations as referee Pierre-Luc Lauziere signaled the end of a thrilling contest, with the hosts earning the 3-1 aggregate win.

Having been the top-seeded team, they now earn hosting rights for the North Star Shield bout, a feat made even more remarkably considering they finished last one year ago.

While Pacific left it all out on the field, the reigning champions now know they’ll be passing the mantle as their campaign comes to a close. It also marks the final match of retiring captain Jamar Dixon.

Who Atletico Ottawa faces in the final will be determined in a matter of hours: Forge will host Cavalry tonight after a nervy opening leg that leaves it all left to play for between the two.