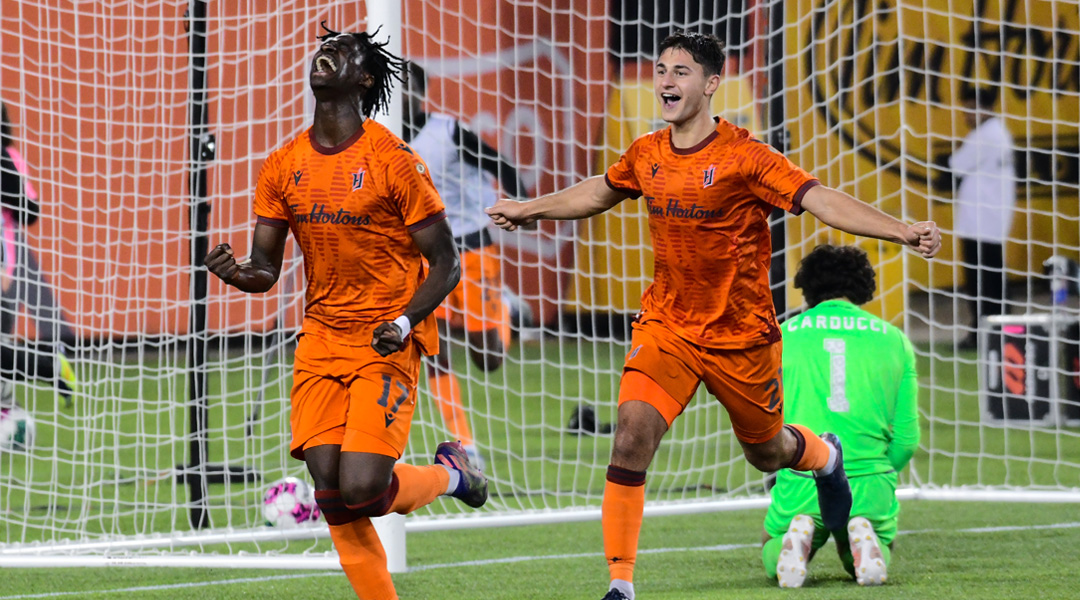 Whenever Forge and Cavalry meet in an important match, it is always an intense game. That was no different this evening at Tim Hortons Field: when the orange smoke cleared following a must-win playoff bout, it was Forge who once again got the important result, winning 2-1 on the night and 3-2 on aggregate.

Hammers coach Bobby Smyrniotis made just one change from the first leg last weekend. Malik Owolabi-Belewu was sacrificed for Daniel Krutzen in the defense. Opposite number Tommy Wheeldon Junior made two adjustments to his starting 11, withh Joe Di Chiara and David Norman coming in for Mikael Cantave and Roberto Alarcón.

Forge had the best chances in the opening half as they started with a lot of intensity. Cavalry was twice almost caught out with from Tristan Borges crosses. In the end, very few major scoring chances occurred in the half.

While things were not too chippy for most of the opening period, there was always that feeling that something could get out of hand. Just moments before the half, the intensity did start as Forge went down to ten men. After a Cavalry freekick was cleared, Kyle Bekker went for the loose ball with a high foot. The skipper caught Elijah Adekugbe with his studs, with referee Yusri Rudolf immediately sending Bekker off.

It is the second time that Bekker received a sending off against Cavlary this season, having done so the last time the teams met at Tim Hortons Field.

The man advantage only lasted a few minutes for Cavalry, however. Norman earned his second yellow of the half after pushing Alessandro Hojabrpour on the touchline. He had gotten a yellow card 20 minutes earlier for a foul.

The second half kept much of the heated moments, but without any incident that led to more red cards. Forge, now returning to parity regarding personnel, kept up the attack. With a quarter of the game to play, the Hammers struck.

A deflected pass went to Hojabrpour who brought the ball forward and played an excellent pass to David Choiniere. The winger drove into the box and fired a low shot past Marco Carducci, opening the scoring and bringing the volume at Tim Hortons Field up to a maximum.

The hosts only had to wait five minutes to double their advantage. After the initial cross was partially cleared, Borges received the ball on the left-hand side. He beat Daan Klomp with a nutmeg before being brought down in the box.

The referee pointed to the spot, where Woobens Pacius converted the penalty. Carducci went the right way but could not keep out the shot.

With time running thin for the Cavs, a triple change was immediately made. They did not have to wait long for their goal. Charlie Trafford’s first pass of the game found Jose Escalante. The Honduran beat Rezart Rama and played the ball to substitute Myer Bevan. The striker made no mistake, sending Triston Henry the wrong way.

That was the last serious chance either team would have. Despite a late fury of attempts from the guests, it would not be enough. Forge prevailed 2-1 on the night to move on 3-2 over two legs.

That means that the Hammers will play in their fourth successive Canadian Premier League final next Sunday in Ottawa. They will face the regular season winners Atletico Ottawa, who topped Pacific 3-1 on aggregate earlier in the day.

Both teams won away from home against the other in the regular season, with the other two matches ending in draws. Ottawa has never beaten Forge at TD Place, but will fancy their chances in a week’s time to clinch their maiden North Star Shield.