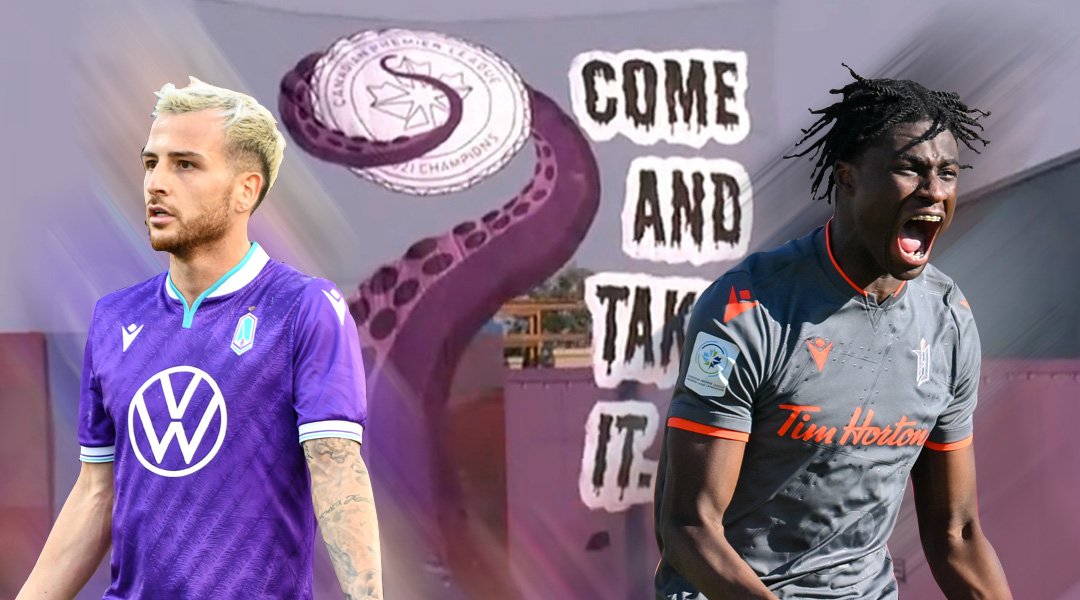 With Saturday now in the rearview mirror and the first leg of the semi-finals now complete, we can take a moment and look back at what the opening stage of the postseason has brought us thus far. It’s been full of playoff intensity and drama, and with that rollercoaster of emotions comes some highs and lows.

So let’s take a look at some of them. Say, three apiece:

The CPL Put On A Show

The matches weren’t the most high-scoring that we’ve seen, but the quality of play on the pitch has evidently grown year-over-year. All four title contenders had a lot to their game, and the result looked good on the television screen: we were treated to many dramatic moments, great saves, near-misses, and the emotional celebrations that only playoffs can bring.

We also got to see several of the currently-reveal awards nominees back up why they’re up for awards: Nathan Ingham put in a stellar performance to help Atletico Ottawa to a clean sheet in its first playoff appearance, presumable MVP candidate Ollie Bassett assisted the go-ahead goal, and Best U-21 Canadian nominee Woobens Pacius levelled the score in Forge’s tie.

The Tridents enjoy some truly stellar support at Starlight Stadium, and the supporters’ groups didn’t miss an opportunity to impress during what was technically Pacific’s first playoff game at home: as kickoff loomed, a certain purple figure rose above the crowd ushering out a cryptic challenge to the visitors.

Look at that picture. That’s an absolute beauty.

This isn’t the first stellar tifo made by the fans this year, with the Lakeside Buoys’ Welcome To The Pacific graphic for the match against Waterhouse even being turned into club merchandise with some proceeds going right back to the SG.

The Playoffs Are Available For Free

While the Canadian Premier League is available through subscription platforms like OneSoccer, fuboTV, and the Telus Optik TV, the playoffs have been made freely available this year through the Telus Sports App. The barrier to dipping one’s toes into Canadian soccer has never been easier, and it’s really cool to see OneSoccer put forth these initiatives for such important matches.

With the first leg already complete, interested viewers have three more matches up for grabs: next weekend’s closing legs of the semi-final stage, and then the CPL Final after that.

Wheels Down On “It’s Over”

OneSoccer host Gareth Wheeler is, first and foremost, and entertainer with a bachelor’s in quote generation – but his antics following Pacific’s two-nil first leg defeat really take the wind out of the second leg. Declaring the two-legged tie as “over” after a 2-0 result in the first leg and even going so far as to wave an Atletico Ottawa kit around, Wheeler unintentionally asks the audience: “Why tune in, then?”

It’s one thing to offer hot takes, but when they demean what this league is and come paired with actual analysis from other hosts, the lines get blurred and viewers are left with a confusing end product.

To add another low: it’s been 330 days since OneSoccer’s solution to the Kurt Larson controversy was simply to never follow up on it, nor even mention the employee again. He was ushered into the shadows so quickly that even his own apology got removed from Twitter – it’s a bad look.

The club captain who helped the side to its first North Star Shield win last year will be hanging up his boots at the end of the season.

The 33-year-old has made 23 appearances for the Tridents this year, having also helped usher them into their first continental competition earlier this year. This October has seen him used as a late game substitute under James Merriman, and that’s how his final home match went: coming on for the final ten minutes, he could only watch as Atletico Ottawa doubled the lead in added time.

This year has been a tough one for retiring captains: Daryl Fordyce ended his own ‘last dance’ with a red card, though it remains to be seen what awaits Jamar in his final away match next weekend.

The Canadian Premier League announced a change to its yellow card accumulation rule just hours ahead of playoffs, releasing a statement that declared it had successfully made the amendment back on October 1 and had informed clubs ‘prior to the end of the regular season’.

It, uh, seems like not every got the memo.

“It’s news to me, this is the first I’m hearing of it,” said Nathan Ingham after learning this rule would see Diego Espejo ruled out for the second leg. “I’m constantly confused as to why we find these out so late. There were problems at the end of last season about how suspensions work going into playoffs, but there’s clearly a miscommunication, or maybe I’m just not privy to it. I don’t know why it’s secretive, or so last minute…it’s so strange. It’s news to me.”

Given the reaction of most from around the league, it was news to everyone else, too.

Next Sunday’s second legs will see Forge host Cavalry in what has been a perfectly even affair so far, while Pacific FC will march into TD Place knowing that the club needs to procure goals this time around. When the dust settles and only two teams are left standing, the highest-seeded team will earn hosting rights to the CPL Final.

Do you have any highs or lows that weren’t mentioned here? List them below!