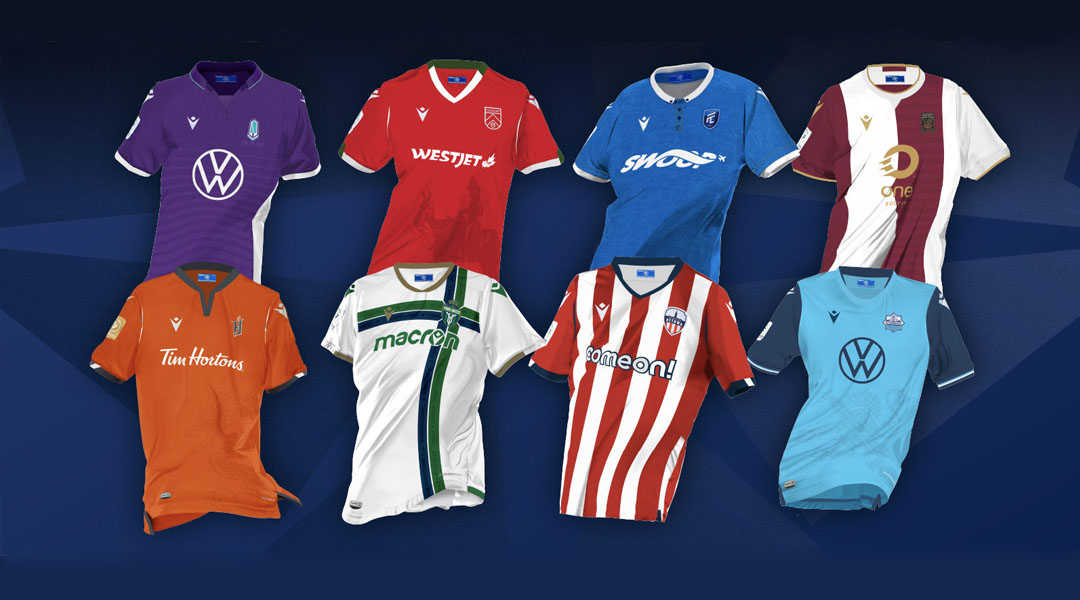 The Canadian Premier League has revealed new Macron 2021 home kits for all eight of its clubs ahead of the 2021 CPL season, which will kick off on June 26 in Winnipeg, Manitoba.

Hailed by the league as “Community” jerseys, each side’s new home kit is described as a nod of acknowledgement and gratitude to their home communities. CPL sides will have the option of wearing these new kits in addition to the home and away looks they wore at 2020’s The Island Games.

Take a look at the new threads below:

Last year the league’s eighth team reveal its inaugural home kit after the other clubs had shown off their 2020 home looks, but this time around the Ottawa-based club was ready to launch in tandem with the others.

Dubbed “The O”, the second-ever Atletico Ottawa home kit retains its signature red-and-white stripe look accentuated by a subtle “O” chain design in the red stripes. The back of the kit features a large red Maple Leaf that will be visible underneath each athlete’s player number.

The expansion side sports a new kit sponsor with ComeOn!, which just inked a multi-year deal to become the league’s official sports betting and online casino partner.

With Cavalry having launched with a single white-sash-on-red kit in 2019 before following it up with a red-and-white gradient sash look in 2020, this represents a departure from what fans may have expected.

The Fort Calgary kit shows a blanket of red with a sublimated print of Colonel James McLeod on the bottom right, with Fort Calgary – the kit’s namesake – on the back. With accents of White and Regimental Green on the collar, the styles of associated with Cavalry FC persist with red taking on a more predominant selection this year around.

The back-to-back Canadian Premier League champions are going back to a straight orange look akin to their inaugural season, with the 2021 Spark kit featuring a dragon – the club’s mascot – adorning the bottom right, assembled by a spark design. The length of the dragon stretches over onto the back of the kit, too.

Like last year, Forge FC will be wearing a Golden Champion Patch on their sleeve.

Perhaps one of the most clean looks of the 2021 Canadian Premier League season, FC Edmonton will be taking to the pitch with a “Blue Denim” kit in a familiar Royal Blue look. With subtle colour pops of White and Dark Blue along with a large collar complimented by navy buttons, it’s a fresh look for an Eddies squad under new leadership.

The denim looks also pays heritage to the city itself, which was a pioneer in the design and manufacturing of denim jeans since 1911. The rear of the collar features the iconic Eddies symbol of good luck, the Rally Rabbit.

Taking heavy inspiration from the Flag of Nova Scotia, the Halifax Wanderers have incorporated the Lion Rampant Crest in a geometric pattern featuring front and centre on a sea of Aqua Ocean Blue complimented by dark blue sleeves, a white-and-blue trim, and the club slogan of “Together X From Aways” centred on the back.

Dubbed “The Swell”, the Tridents’ new look plays homage to the ocean-surface gravity waves seen off the coast of Vancouver Island. With Starfish Purple featuring as the primary colour, the wave gradient washes over the bulk of the front, with the club’s motto “For The Isle” featuring underneath the badge itself.

One of the largest departures from a previous look, Valour FC is paying homage to the great wheat fields of Manitoba with a kit that shows an even split between Valour Maroon and White, with a back featuring Harvest Gold and White accents.

We’re sure fans of the Saskatoon expansion team will have something to say about the Winnipeg-based side claiming being the first to jump into a prairie-style identity.

With a new brand identity comes a new look for York United: the primarily white home kit features a cross of Lake Ontario Blue and York Green, with the old City of York motto E Singulis Communitas (From One, A Community) sublimated through the stripes.

York United had previously revealed a special edition kit to commemorate the side’s rebranding from York9 FC, with the Lake Ontario Blue and Victory Gold stripes offering a nice, deep colour compliment for the one-off kit. It marks only the second time a club has done a third choice kit, with Forge FC having done a black-and-gold third choice kit in 2019.

Both of the new York United kits were designed in-house by a team led by Robert Marchese, who has been with the club from day one and played a large role in the club’s recent rebrand.

All-told, there’s quite a few bold looks set to feature in the 2021 Canadian Premier League season. The league is pricing the new kits at $119.99 for Men’s And Women’s, with Youth kits coming at $79.99. Kit name customization is available for an additional $34.99.

The 2021 Canadian Premier League season will start with all eight clubs in Winnipeg, Manitoba for the first 32 matches of the campaign (that’s eight matches each), with the league hoping that teams can return to their home markets with fans in the stands by the time each team’s first eight matches are completed on July 24, 2021.

The opening weekend is currently scheduled for June 26, 2021, with FC Edmonton taking on Atletico Ottawa at 2:00PM EST and Pacific FC taking on the Halifax Wanderers at 5:00PM EST. The next day will see Forge FC take on Valour FC at 2:00PM EST, and Cavalry FC kick off against York United at 5:00PM EST.