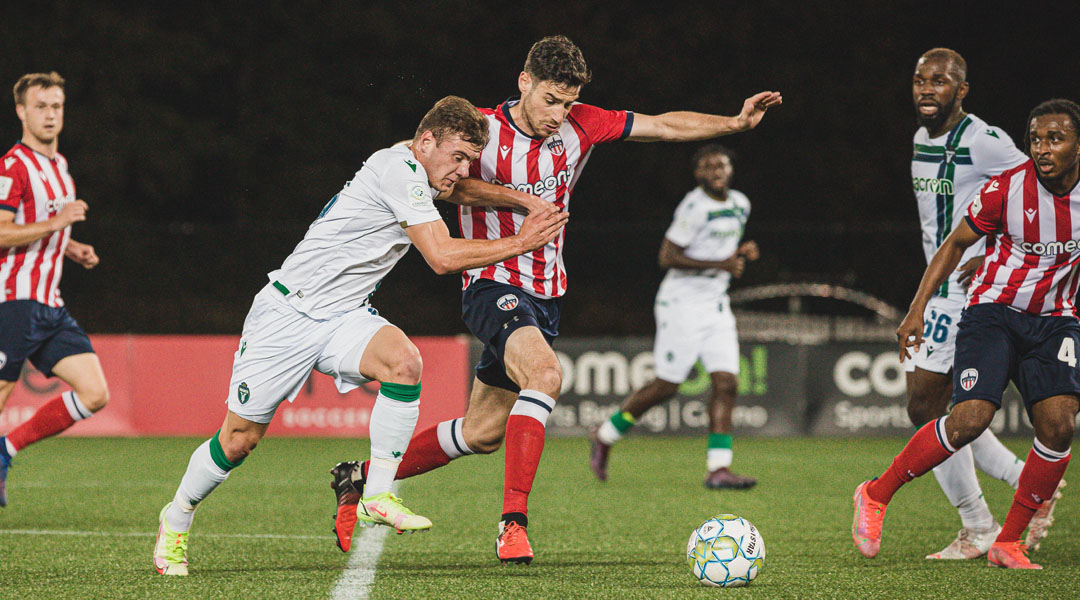 The 2022 Canadian Premier League season kicks off today, and with it comes the continued growth of the professional game in Canada – and a few new updates brought on by the league, too.

Yesterday saw the CPL release a concise rules refresher for fans: clubs can have 23 players on an active roster with no more than seven internationals and a minimum of three domestic U-21 players. Each team must field at least six Canadian players in their starting eleven for each game, where each regular season match will see each side get five substitutions through three opportunities along along with two concussion substitutions.

That was all expected, though the official update also introduced two new league rules. We also thought it’d be fun to look at one that didn’t quite make the cut, but let’s start of with the two new rules that made it in, starting with…

a roster rule to gives the kids more minutes.

The league is raising the required minutes given to domestic U-21 players for the second time, with the 2022 CPL seeing now requiring that clubs give the youngsters 2,000 accumulative minutes of game time. That’s up from 1,500 last year, which in turn was increased from the original 1,000 minute-marker set in 2019.

Fans knew the rule change was coming after the CPL Director of Football Oliver Gage spoke to The Athletic about raising the bar after the league saw how comfortable all eight of its CPL clubs were with 2021’s youth minute increase. With the Canada U-20 roster featuring six players in the league, it’ll be interesting to see what future national team talents get their start earning minutes through this roster rule.

The other new rule is all about trusting the kids, too. It’s…

a roster rule that provides a salary cap incentive for signing youth talent.

The Canadian Premier League has always been about developing young talent, but this season sees sees the league add significant impetus for such through a positive roster incentive: all U-21 athletes on a standard player contract only hit the cap at 50% of their total compensation (for example, a U-21 player on a $30,000 deal only hits his club’s cap for $15,000).

The league is allowing clubs to earn up to $100,000 of additional player cap room through this incentive, potentially allowing teams maximally invested into their roster to budget up to $1,300,000 (a maximum of $950,000 on player compensation assuming that $200,000 is spent on U-21 players, thus hitting the maximal benefit of $100,000). You can find more on the base salary cap here.

It’s worth noting that this isn’t just an incentive for domestic U-21 talent: it applies to international players too, since the league wants to encourage clubs to develop youngsters who can be sold on for a profit later. It’s not clear if any club has fully applied this strategy, but given that at least one side has up to eight U-21 athletes in all, it’s looking like this roster rule was known behind the scenes for some time now.

Not every rule addition suggested this season was so well-received, however.

here’s one rule that didn’t make it.

When finalizing the playoff structure, the league considered having the team who finished top of the table being able to pick their playoff opponent rather than the default “first versus fourth and second versus third” seed setups. It’s a clear recipe for drama: imagine the scenes if the first-placed team picked their own opponent and then lost, or the rivalry-inducing sting felt by the other team if they were picked and soundly defeated.

Instead, the idea was shot down by a committee comprised of several representative clubs, who felt that having the regular season winner pick their own playoff opponent would add too much pressure to the top team. Instead, here’s what fans are going to see in terms of the season’s structure:

The 2022 Canadian Premier League season begins tonight with York United hosting the Halifax Wanderers, while the remaining six clubs all set to play over the course of the weekend. Pacific FC’s title defense is bound to have fireworks, and we’re hoping to see numbers rise in stadiums for the league’s first full-length, in-market season since the CPL arrived in 2019.