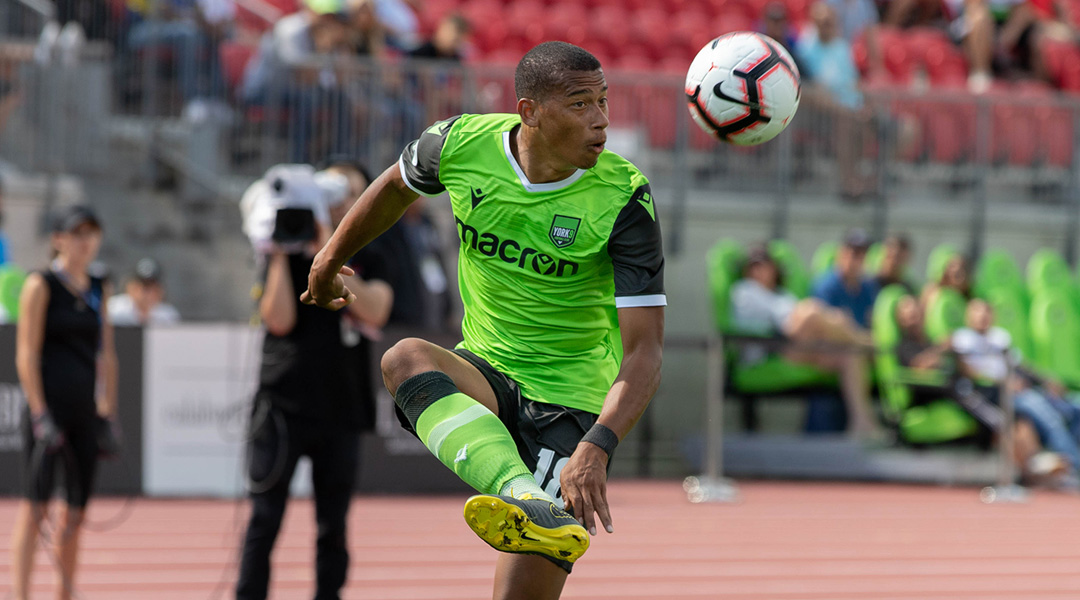 Update: Ryan Telfer has transferred to a club in Cyprus.

The inaugural Canadian Premier League season has come to a close for third-placed York9 FC, and that means Toronto FC loanee Ryan Telfer may have donned green for the last time.

The 25-year-old forward had an exemplary year in the newfound league, delivering ten goals and two assists across the season, including the league’s first-ever goal and some crucial ones for York9 FC in the Canadian Championship.

His speedy pace and deft touches earned him a call up for the Trinidad and Tobago national team, with his first international goal coming just three days after his debut for the Soca Warriors. He’s been described as the perfect prototype for what the CPL can do for a player, and he’s credited the CPL for his sharpness during a short emergency loan recall to TFC wherein he delivered a crucial assist after just a few short minutes on the field.


With his Major League Soccer contract reportedly due to expire at the end of the month, questions about where the talented forward will go next have surrounded the Mississauga-born player, and with good reason: the CPL was designed to be an export league, and it certainly seems to have helped raise Telfer’s profile in its first year. It’s unclear if Toronto FC will be renewing his contract, though TFC head coach Greg Vanney said he has been impressed by Telfer’s CPL performances.

That being said, TFC currently has a surplus of talented attacking midfielders, leading to speculation that other MLS teams might be eyeing a deal for Telfer’s rights – assuming TFC doesn’t renew his contract. With Telfer’s stock on the rise, it wouldn’t be surprising for the club to do so.

Of course, there’s a certain CPL club that would love to retain his services, too. When asked if Ryan Telfer would be back in green next year, York9 FC gaffer Jim Brennan stated that the club would undergo conversations with Telfer’s agent to see what they could do.

Yeah, there’s going to be conversations. Look, we’d love to get him back next year. For me, personally, I think Ryan was an absolute pleasure to work with and it was great to see him grow as a young man and a professional footballer. He had a great season, eight [league] goals, played almost every game for us, got called up to international duty. That’s full credit to him: he’s bought in to everything that we were doing here. It would be great to see if we can get him back next season, but we understand that he’s still with Toronto FC, and then we’ll have conversation with him to see what his next steps are, where he’s going to go with his career. As a club, we’ve enjoyed working with Ryan and it was an absolute pleasure.

Throughout the club’s inaugural CPL campaign, Telfer has been a crucial cog in the York9 FC starting eleven, and with Jim Brennan happy with the core squad itself, he’s the player who would leave the biggest shoes to fill if he left – but having brought him in on a loan, that was always the expected outcome.

For his part, Telfer looks back on the historic season with positive memories. He sees a league that has helped players like himself develop by way of delivering meaningful minutes that would have been near-impossible to find otherwise:

Looking back over the entire season, it was something special to be a part of. Especially knowing that all of these other Canadian players and foreign players who have come in and bought into the idea of playing in this new league. I certainly personally can see from my perspective, almost every single person who was playing in this league has benefited tremendously, has been able to display what they have, and that goes from every person’s team to the coaching staffs.

For many players across the burgeoning league, it was their first year of professional action. For others, it was a chance to shine as starters. The inaugural campaign has led to standout years for players like Tristan Borges, Terran Campbell, Nico Pasquotti, and Marco Carducci, who even earned a call-up to the Canadian national team.


Telfer, who also benefited from international recognition for his performances in the league, credited Brennan giving him plenty of crucial gametime for elevating his game to the next level.

For me, it benefited me in the way that I was able to get minutes in a high, intense league, and it was meaningful minutes, and it meant a lot to me as a person and to me as a player, helping me develop into the person that I’ve become to the end of the season, from start to end. You can see I was flourishing, as it brought me to be recognized on the international level. Also for the other clubs. It’s been very special to be a part of this inaugural season.

With the league’s clubs delivering underdog victories like Cavalry’s win over Vancouver in the Vogageurs Cup and Forge FC’s win over Antigua GFC in the CONCACAF League, the newly-founded domestic professional league certainly proved that it can deliver quality gameplay on the pitch.


Looking back on his past 32 games for the Nine Stripes – by far his busiest top flight season as a pro footballer – Telfer is satisfied with the seeds he has helped plant in the burgeoning league.

Whatever happens in Telfer’s future, the talented forward certainly blossomed under the tutelage of Jim Brennan and Carmine Isacco, who was the one who first convinced him to come to the Canadian Premier League in the first place. With Isacco adamant that TFC youngsters would be better served in the CPL than with Ottawa Fury, it’ll be interesting to see if the York Region club’s TFC connection leads to any domestic U-21 loans next season. As per league roster rules, York9 FC will need to sign three players in that age group ahead of its 2020 campaign.

Regardless of what colour kit Telfer dons in 2020, he’s been a crucial part of Canadian Premier League history, and is living proof that the league can help develop talent at the international level. He’d be a big boost to both York9 FC supporters and the league itself if he ends up staying, but for now, conversations about his next steps will be taking place in the near future.