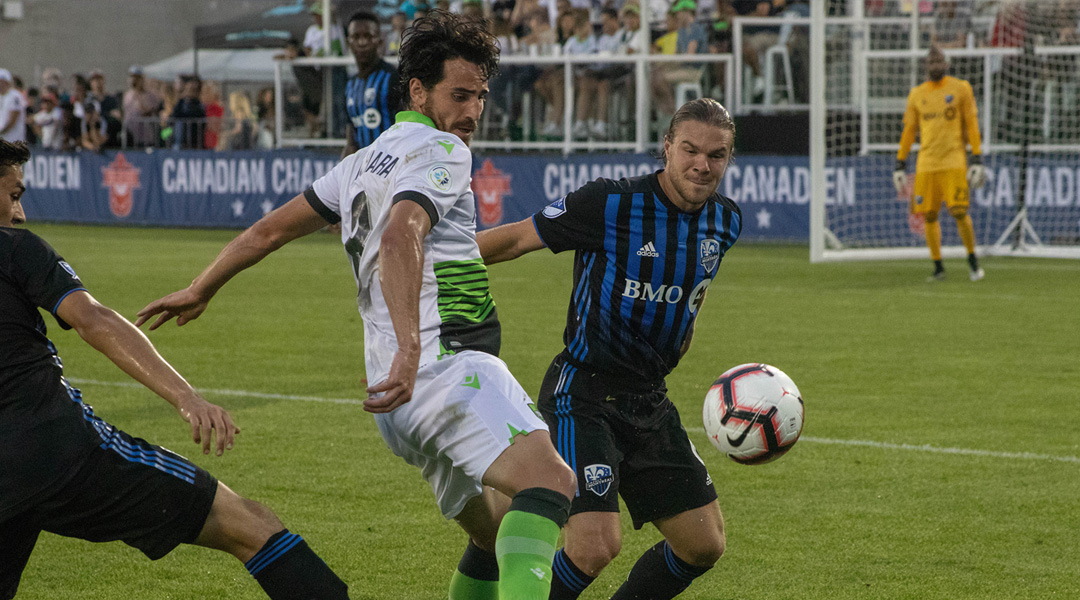 Canadian sports history was made last night as York9 FC became the first CPL team to take on Major League Soccer opposition via the third round of the Canadian Championship. The benchmark moment made the result nearly impossible to predict, though it’s fair to say most fans probably expected a one-sided match in favour of the Montreal Impact.

What took place was a much more evenly-matched game filled with drama, which saw two crossbars being struck and four evenly-distributed goals that included a last-gasp penalty to give the Montreal Impact an away goal advantage going into the second leg.

Having scored twice in the last 15 minutes, York9 FC almost walked away as shock winners. The near-5,000 crowd at York Lions Stadium was receptive to the squad’s efforts, providing a boisterous atmosphere that, it’s fair to say, was much-needed in the venue.

Speaking with press after the dramatic 2-2 draw, Montreal Impact midfielder and Canadian international Samuel Piette finished the game impressed with the quality of play his Canadian Premier League opposition provided, and offered his thoughts on the burgeoning League as well:

“It’s looking very good for the future, for the CPL. As a Canadian, I couldn’t be happier to have professional teams in a professional league in our own country. The level was high, like I expected. The quality of the players here is really high. Honestly, I’m happy. It’s the first year, so there’s a lot of things that need improvement, like in every league – same as Premier League, same as MLS, same as all the leagues. I think it’s a great start for Canada in terms of putting football on the map.”

While Piette said he was disappointed to see his side concede two goals to the expected minnows of the two-legged fixture, the 24-year-old defensive midfielder was quick to point out that he was well-aware of the dangers the Nine Stripes provided, having played with many of the club’s Canadian contingent through various levels of the national team.

“I don’t think we underestimated them. Me, personally, I know a lot of guys on that team. I played a lot of games with these guys on the youth national teams before, so I knew they had qualities. I think it’s a good result for us.”

“It’s always difficult to play against a side that are supposed to play at a lower level. I’m OK with what we have done, but in the moment we are in a period where we concede too many goals. Goals that, once again, look the same every week. We really have to correct this.”

It’ll be interesting to see how the second leg unfolds in Montreal on July 24. The Nine Stripes came minutes away from a massive upset, but it’s fair to say Jim Brennan’s side is going into the second leg with a chance at surprising the Impact once again.

With Cavalry FC holding the Vancouver Whitecaps to a scoreless draw and Halifax Wanderers putting up a good fight in a 3-2 loss to Ottawa Fury, yesterday marked a great showing from all three Canadian Premier League sides that remain in the domestic cup competition. It was certainly a great day for both the neutrals and fans who want to see the sport continue to grow in Canada.