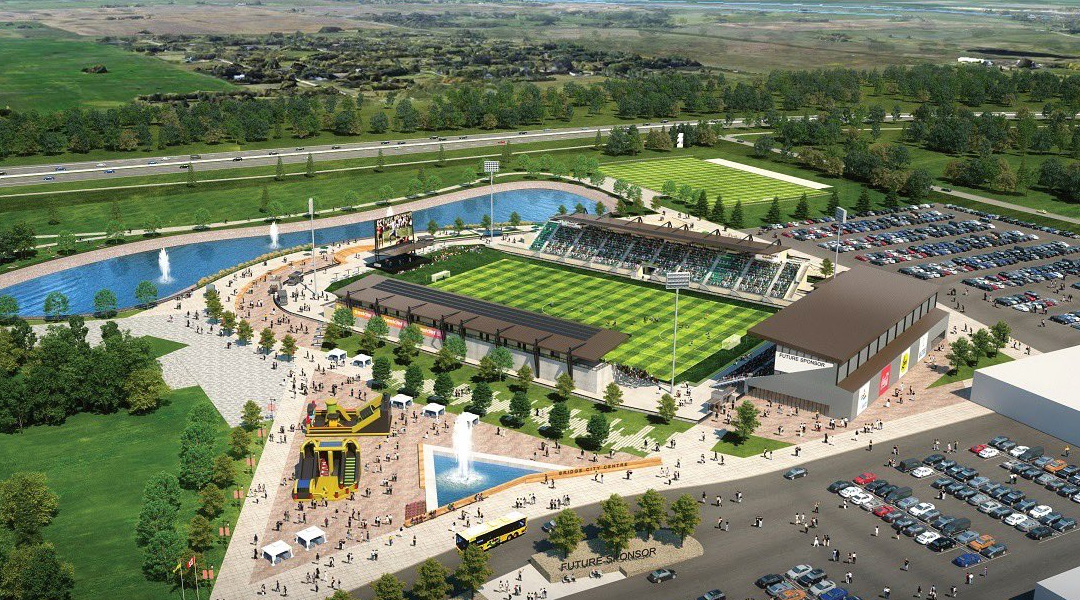 The ownership group behind a potential Canadian Premier League team in Saskatoon has revealed official stadium rendering at a press conference held in the province today.

Tonight saw Al Simpson take to the stage to reveal his vision of a new CPL stadium set to be built in Saskatoon’s Prairielands Park, revealing an ambitious stadium plan that even includes a sizable water feature at the park’s Marquis Downs location.

Here’s the video revealed as revealed by Living Sky Sports and Entertainment, the group behind Saskatoon’s CPL bid:

The above stadium will host more than a Canadian Premier League expansion team: it will also host community recreational soccer, cricket, lacrosse, and rugby, in addition to hosting concerts on the field turf surface. There will also be a recreational soccer pitch constructed where the former Marquis Downs jockey parking used to be, with the aforementioned water feature set to run along the south end of the stadium grounds.

Of course, this is all still pending approval: as a majority taxpayer-funded venture, this is quite a pitch for the city to consider, and there’s no concrete timeline on when or if things might fall into place. It’s also worth noting that Al Simpson isn’t the only owner with eyes on the province, though he does hold exclusive rights for now.

For their part, Simpson and his ownership group have pledged $2 million towards the stadium, with Prairieland set to pitch in another $2 million along with “hundreds of thousands of dollars in staff support”. The total cost of the stadium is expected to tally up to $28 million overall, with Simpson’s CPL team as the primary tenant.

A SREDA Economic Impact study states that constructing of the stadium will generate 168 full-time equivalent jobs with an estimated $10.33 million labour income for this period. Once complete, the same study projects that the team will lead to a $1.2 million annual incraese to tourism GDP, with the stadium also available for an estimated 800 community hours for soccer and cricket clubs.

The video also reveals that ticket sales for events at the new Prairielands location will be subject to an amusement tax that is estimated to return some $100,000 per year of revenue to the city of Saskatoon itself.

The ownership group helmed by Al Simpson has exclusive expansion rights to Saskatchewan that hinge on securing approval for a soccer-specific stadium. Simpson has focused heavily on advancing a publicly-funded stadium at Prairieland Park’s Marquis Downs location, which was previously used for horse racing.

Simpson was once part of a previous ownership group which launched an earlier litmus test in the area that drew in over 3,000 fans back in 2019. Earlier this year, it was revealed that the new stadium’s target capacity was set to be around 4,000, a figure that seems to have risen to around 5,500 for the proposed venue.

When Simpson was awarded his conditional expansion rights in March 2021, he made it clear that he hoped to launch a team as soon as 2023. With Langley set to launch a team of its own next year and Windsor hoping to follow not long after, the Canadian Premier League looks set gain a few teams in the neat future – though it might lose one, too.

Prairieland Park has already entered into a Memorandum of Understanding regarding the stadium’s construction through Living Sky Sports and Entertainment, though further details on the project are yet to come.