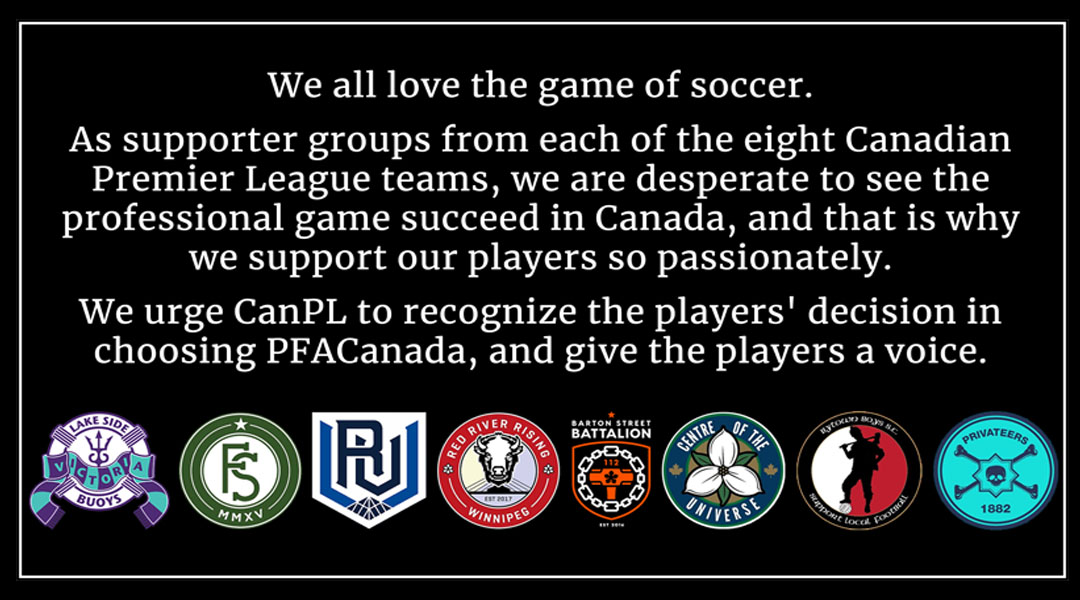 Update: More than eight supporters’ groups have joined the movement.

Recognition of the union has been a frequented talking point ahead of the 2021 CPL season, especially following the early retirement of players like Luca Gasparotto and Dylan Carreiro.

In addition to the eight groups above, the post was also shared by the Winstars Soccer Academy, showing that solidarity for the movement extends beyond direct CPL circles. While not included in the release, it is reported that York United SG Generation IX was also supportive of the initiative, while the Capital City SG had already released a statement supportive of collective bargaining in February.

Another Pacific FC-based supporters’ group, Torcida Organizada Pacific, also officially confirmed their support for the movement, along with the Wanderers’ Ultras 108.

As the discussion regarding union representation reached a fever pitch in early 2021, the Canadian Premier League made a significant step towards transparency by releasing its 2021 Salary Cap information and instilling a minimum salary, while also disclosing anonymized club player financial details from its inaugural season.

If the league recognizes PFA Canada, the supporters’ groups are hoping that the FIFPRO member will be able to ensure standards and protections for players collectively improve over time. The union also hopes to represent elite level Canadian talent from coast-to-coast, with plans to further its relationship with the Canadian Women’s National Team Players’ Association and negotiate a contract for the men’s national team, too.

Today’s unified statement from a growing number of CPL supporters’ groups adds further pressure on the matter for Canadian Premier League. PFA Canada recently stated that it still had yet to receive an official communication from CPL Commissioner David Clanachan.

Novak on Clube Condeixa, Forge, And Climbing His Career Ladder