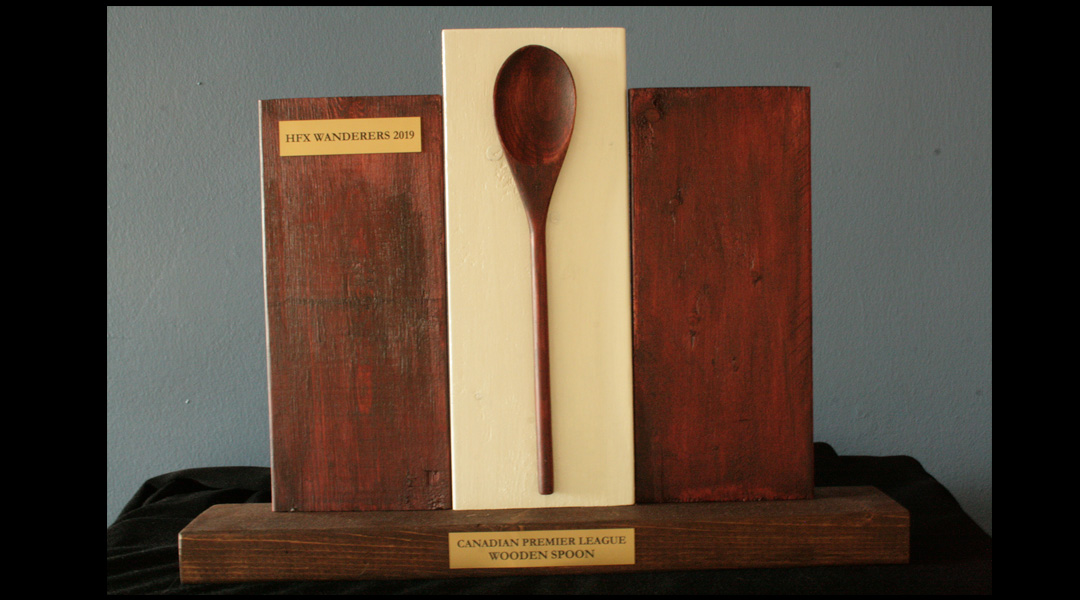 With the Canadian Premier League now in its offseason, we suppose it’s only fitting that fans are finding their own ways to keep entertained: this week, a collective of fans have unveiled a fan-made award called the CPL Wooden Spoon, which is awarded to the team that finishes bottom in the combined league table.

Following the 2019 inaugural Canadian Premier League season, the Halifax Wanderers have officially become the first-ever recipient of the CPL Wooden Spoon. Stephen Hart’s side finished with 6 wins, 10 draws, and 12 losses, securing only one league away win across the entire year.


The award – which is sourced entirely from Canadian materials – is set to be officially received by the Halifax Wanderers in the near future, though we have to imagine it’s not exactly going to be prominently displayed in the club’s front office.

The Wanderers are hoping to avoid prolonging the Wooden Spoon’s stay next season, with Club President Derek Martin stating that a higher pedigree of players would take to the pitch for the east coast club come 2020. To help with this, the club has re-signed five of its core players from the inaugural campaign so far, and just brought in two new players from the Montreal Carabins.


The idea of the Wooden Spoon has existed for some time, with its origins stretching all the way back to the University of Cambridge’s early days, where it was given to the student who achieved the lowest exam marks but still obtained a third-class degree. There are several fan-made Wooden Spoon awards in the world of professional sports, including in the likes of Major League Soccer.

It’s not the first tongue-in-cheek award handed out this year, either: FC Edmonton head coach Jeff Paulus accepted the Peacock Plate from Kurt Larson for finishing third place in the spring season. With Cavalry FC and Forge FC in a two-horse race at the top, the crew at OneSoccer had decided to make a prize for the rest of the clubs fighting for third, and it eventually grew into an actual prize.

The wooden spoon initiative even has a snazzy logo designed by Xav Ouellette, a Canadian graphics designer who has made several conceptual CPL expansion club logos and has provided designs for several CPL supporters’ groups, too.

Should two clubs finish tied on points at the bottom of the cumulative table, the team with the most wins will find itself safe from the spoon.


The Ontario-based group behind the CPL Wooden Spoon aren’t finished here, either: they’re now working on creating an actual CPL Title Belt. For the uninitiated, the belt is a boxing-style championship belt that is won and lost in a never-ending series of title-matches tracing back to the inaugural CPL match. Currently, Forge FC holds that one.

2019 has also seen some more serious fan-made trophies handed out: both the FC Edmonton and Cavalry FC supporters combined their efforts to create the Wildrose Cup to give to the Al Classico champion, while League1 Ontario got the Credit River Cup for its Mississauga-based clubs to compete for, too.