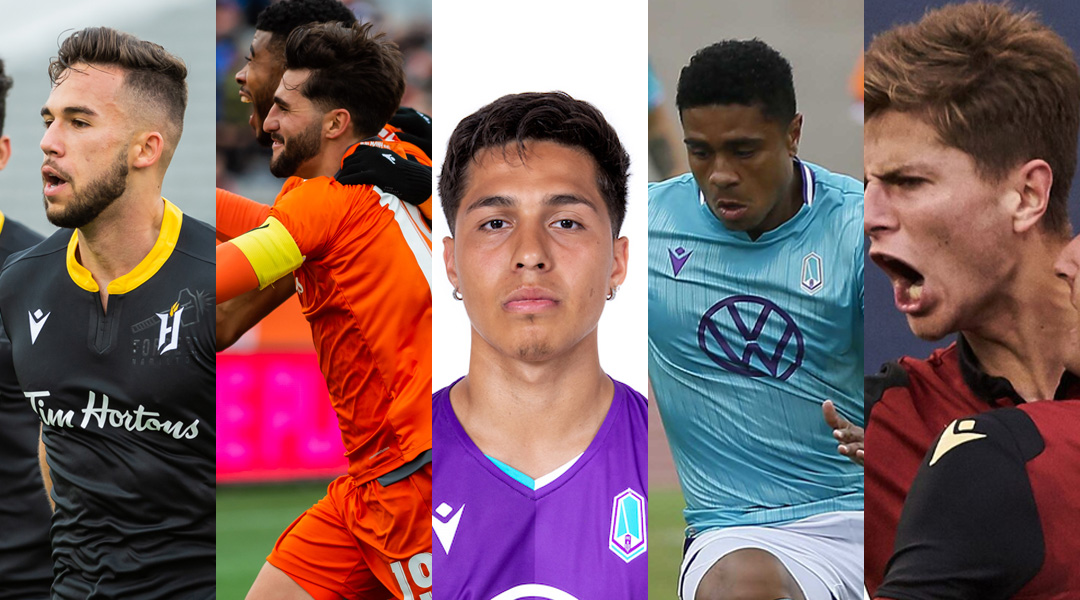 The 5 Youngest CPL Goalscorers So Far

EDIT: Ahmed Alghamdi scored on Canada Day. His age at the time of scoring: one day older than Tyler Attardo, who’s record will stand for some time now.

Last night, one of the youngest players in the Canadian Premier League made waves when he converted a cross and secured himself a spot in history as the league’s youngest goalscorer. The Canadian Premier League provides coaches with plenty of incentives to play young players, with each club adhering to a league-wide requirement that 1,000 minutes of gametime be given to domestic U-21 players.

That got us wondering: who have the youngest goalscorers been so far? Attardo has now made himself a known quantity, but there are other youngsters that are certainly worth keeping an eye on.

Starting with the oldest (at the time of scoring), let’s run through the 5 youngest Canadian Premier League goalscorers so far:

With Forge FC trailing Valour FC 1-0 at home, head coach Bobby Smyrniotis brought on Jace Kotsopoulos with the hopes that he could shake things up. A few minutes later, the 21-year-old Burlington-born player scored his first professional goal, instigating a comeback that would help Forge FC qualify for the CONCACAF League.

The CPL U SPORTS draft pick came in highly touted for his ruthless tenacity in front of goal, scoring an astounding 57 goals in 53 games during his four-year varsity career with the Guelph Gryphons. He signed a developmental contract on May 16, meaning he’ll be eligible to play for the Guelph Gryphons when the CPL season closes. He’ll also return to being a free agent, but if he continues to impress (especially with Welshman away at the Gold Cup), Kotsopoulos could add to his tally and earn a professional contract offer by the season’s end.

Canadian Premier League fans will be familiar with Borges, who leads the league in scoring after bagging himself four goals from eight games. The 20-year-old has lightning-quick footwork and a knack for catching goalkeepers off-guard, and that’s exactly how he opened his account for the hammer: a deft pass from Welshman allowed him to turn and fire home his first goal of the campaign.

Borges has been in hot form for Forge FC ever since, bagging three more league goals and consistently looking dangerous whenever he has the ball. His off-the-ball movement frequently gives him space to work closer to the opposition keeper, so one can expect Borges to add a few more goals to his tally before the fall season closes. If he keeps up his current pace, he might even become the youngest Golden Boot winner for some time.

The former Canada-U17 international had scored a few professional goals for the Vancouver Whitecaps 2, and he’s now proving himself proficient in the domestic top flight. Terran opened his account for Pacific FC during an away trek to Halifax Wanderers, breaking in from the wing, making space for himself, and nutmegging a defender to send the shot into the back of the net.

If his recent performance against Valour FC is any indication, Campbell is comfortable taking shots from both inside and outside of the box. With Marcus Haber having to leave the match through injury, the 20-year-old Burnaby-born forward may get even more time to shine.

The inaugural season wasn’t even a full week underway when Jose Hernandez became, for a time, its youngest goalscorer at 19 years of age. The Edmonton-born striker took advantage of a quick deflection to open his professional account in his second-ever professional appearance.

With a youth career that took him from FC Edmonton to the Vancouver Whitecaps, Hernandez has a lot to prove at the pro level. Having made three appearances for the Canada U20 squad since 2018, there’ll be many eyes on the youngster to see how he performs in his first full year as a professional athlete.

Attardo is one of the few players who earned a contract through the Got Game Open Trials. While he’d played a handful of minutes from substitute appearances, yesterday’s match was the first time Valour FC head coach Rob Gale handed a start to the local youngster. It didn’t take long for Attardo to impress, utilizing his speed to make dangerous runs and causing huge problems for the Pacific FC defense.

At the stroke of half-time, Attardo headed home an equalizer to cement his place in Canadian Premier League history. Somewhat ironically, he scored it against the league’s youngest team, and took the record of youngest goalscorer from them at the same time.

Given that the 17-year-old is the second-youngest player in the league behind Pacific FC’s Ahmed Alghamdi, fans can probably expect Attardo to remain the league’s youngest goalscorer for the foreseeable future.

At the other end of the scale, Cavalry FC team captain Nikolas Ledgerwood is the league’s oldest goalscorer at 34 years of age – though that didn’t stop him from getting wiggly in one of the league’s strangest celebrations so far. If Cavalry FC can put in a good shift against Forge FC tomorrow, he’ll become the oldest player to win the spring season, too.

With league commissioner David Clanachan giving the league a ‘By Canadians, For Canadians’ mantra, the proof is really in the pudding: all five of the league’s youngest goalscorers are domestic players. The youngest international goalscorer so far is Akeem Garcia, who clocks in at 22 years of age. It’s a close-call for that title, with Belgian defender Daniel Krutzen being the second-youngest by virtue of having been a mere seven days older than Garcia when he scored his first league goal.

In any event, it’ll be interesting to see which young players can edge themselves into history as the squads continue to gel and find their goalscoring form. The best thing about a brand new league is that records will be both quickly made, and quickly broken – though Attardo’s newfound status as the league’s youngest goalscorer looks likely to stick around.