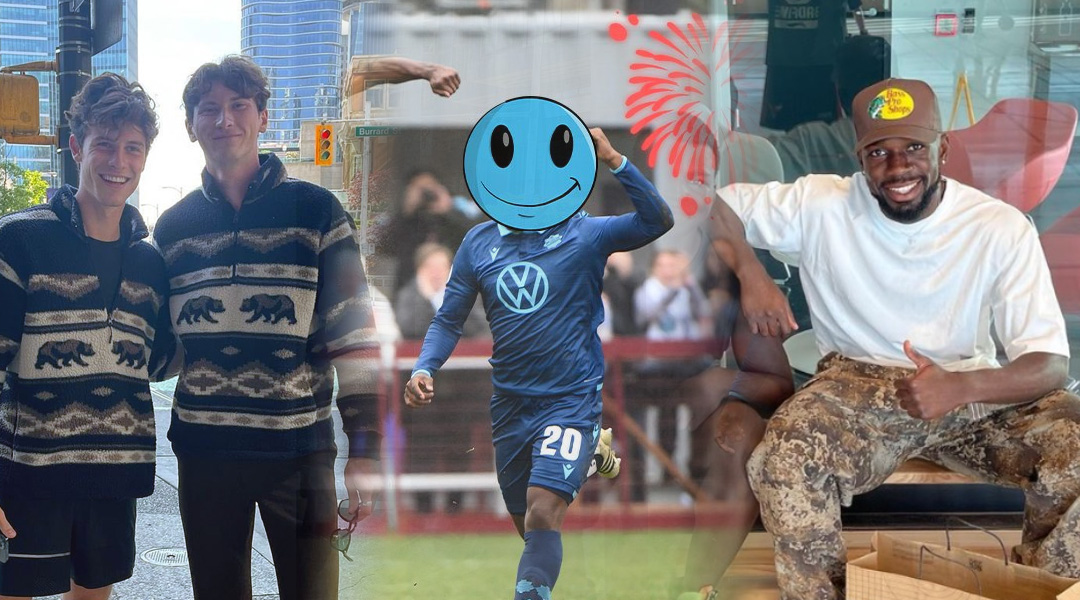 Welcome to our newest feature content for the Canadian Premier League – it’s going to be a bit of an odd one!

There are so, so many little moments across social media that help build the culture of the league, and so many weird, little things that happen that fade away after a few seconds in the spotlight. So, we wanted to keep a little archive of these things.

As the name implies, this is a casual look at some of the odd or noteworthy happenings that take place in the Canadian Premier League world that, otherwise, might just slip on by. Let’s dive in.

While scrolling through club mentions on Twitter during a lull at work – what else to do – we noticed an eyebrow-raising photo of a Scottish gentleman in a Cavalry FC kit. An Adidas Cavalry FC kit.

Given that Macron has produced the league kits for each and every CPL season, someone asked how the kit ended up in the man’s possession – and apparently, Canada Soccer’s own Wayne Cleverly had given it as a gift several years ago, evidently ahead of the CPL’s deal with Macron.

Enjoy that kit, Scott! It may truly be the only one in Europe.

Recent Whitecaps FC 2 recruit Easton Ongaro had a chance encounter with Shawn Mendes on the streets of Vancouver this month, with both of them happening to rock the exact same look.

The chances of this happening? Small. Ant-Man small. The opposite of Easton, basically.

The funny moment was put on Shawn Mendes’ story, which also proved to confirm that one of the CPL’s all-time top goalscorers was closing in on an MLS NEXT Pro deal following his time in Romania.

We also wanted to wish Shawn Mendes all the best as he takes a break from touring to focus on his mental health.

When Zoom Langwa told us that he had been blacklisted by the league, some would be forgiven for assuming that was a theatrical statement.

Then the Canadian Premier League released a ‘CPL heritage moment’ tweet where they, uh, completely censored his face.

Langwa’s time with Halifax ended in dramatic fashion after a touchline dust-up between a teammate and, shortly after, head coach Stephen Hart himself. After finding himself in the German sixth tier, it looks like Langwa has hung up his boots (for now) after his unceremonious exit from domestic football.

Ironically, the league censoring out Langwa’s face – which is either hilariously tongue-in-cheek, or hilariously petty – seems like a CPL heritage moment of its own.

Careful What You Wish For: CPL Goes Viral

If you heard that the Canadian Premier League would produce a clip that would surpass ten million views and attain international coverage, you’d think someone bagged a Puskas Award winner.

Unfortunately, it was just the opposite: William Akio’s goal-line gaff made was quick to make waves, bringing a fairly misleading spotlight onto our growing league.

Fortunately, William Akio has a good head on his shoulders. He not only addressed the miss head-on, but he even analyzed it on his YouTube channel. As he says, that moment doesn’t define him.

If what we’re hearing about Ross County’s interest is true, right now Akio has big things to look forward to rather than looking back.

We know the league office is on the short-staffed side of things, but this survey from the CPL really raised a few eyebrows when it circulated: Not only does it refer to Atletico Ottawa as ‘Ottawa Atletico’, but they also don’t quite get never-say-die side FC Edmonton correct, either.

The league did fix the FC Edmonton typo in the email blast, which was a fan preference survey asking what fans wanted to hear more about and seeing how satisfied fans were with the league’s email communications.

Ottawa Atletico remained in place for the survey, though to be fair, this is the league still misnomers York United as York9 FC on its live stats page.

Still, I don’t think any communication will top the time FC Edmonton leaked the 2021 Canadian Championship, disclosing fixture information before some of the head coaches involved knew what was going on.

Let’s end the casual Friday on a high note: we saw a beautiful little story about York United right-back Chrisnovic N’sa, who went out of his way to leave a positive impact on a young member of the community.

Since his Instagram goes dark intermittently, we’ll record what he posted here for posterity:

“I was watching this little guy play ball for a couple of days,” said N’sa about the young man pictured above. “He’s a great player, can’t lie. My guy was always slipping with his shoes but never stopped smiling! So, I asked him for his shoe size and brought him a lil’ gift the next day. Just love to give to the next generation.”

Given that N’sa has played all but one match for the Nine Stripes this year, it’s fantastic to see that the Montrealer still has time to not only embrace himself with the local community, but make an impact there as well.

As an aside, I think N’sa is the fourth Nine Stripes athlete to sport a Bass Pro Shops hat this month. The York international house’s proximity to Vaughan is really showing!

Neat! So, when’s the next Casual Friday?

Well, these kinds of things don’t pop up with any scheduled regularity, so I don’t think these posts will either. I just want to spotlight the odds and ends that don’t really fit anywhere else, so when I have enough built up I’ll post them here.

Oh, and if you see anything that fits the bill, please feel free to send it my way!