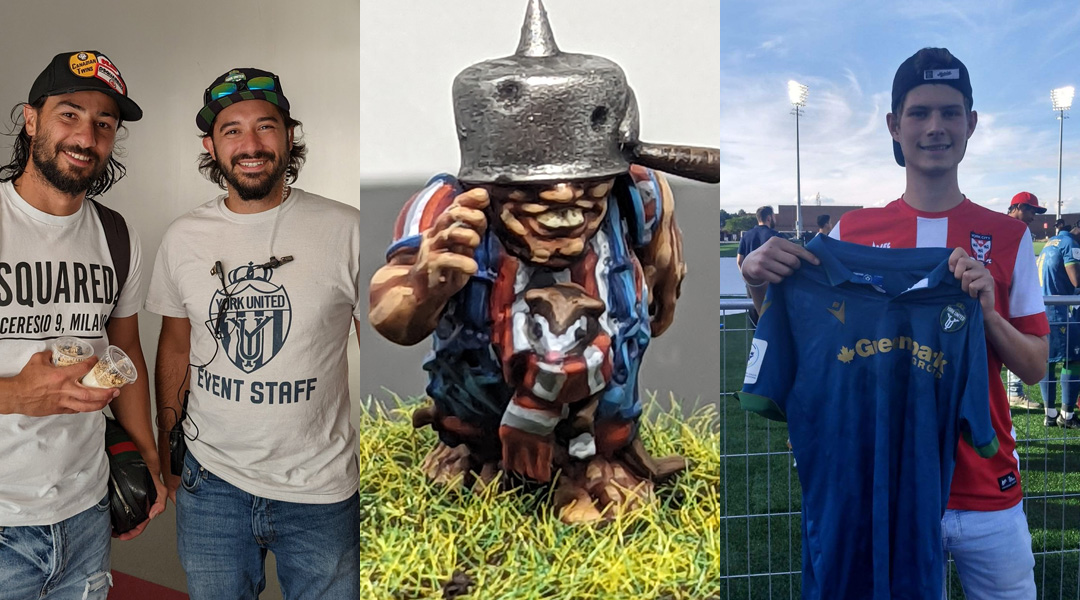 It’s been a solid month since we’ve last had a Casual Friday, so we’ve got a nice stockpile of neat moments from around the league to talk about, from good deeds and cool artwork to the absolutely bizarre happenings that seem to pop up every here and there without explanation.

While FC Edmonton were buzzing to get a 3-2 win over the Wanderers, the match must have had a few dull moments: a group of Eddies fans began following the linesman and mimicing his motions, suggesting either a slow pace for the match or a beer selection that had certainly been enjoyed.

FC Edmonton has started to see over a thousand fans fill in to Clarke Stadium, which is nice to see after the club kicked off its season with nearly half that number. It’s still far away from what anyone wants, but at least the summertime soccer is getting a few extra eyes on it.

Never change, Eddies fans – there just needs to be more of you!

The Eddies stepped into the spotlight again after calling former FC Edmonton head coach Jeff Paulus and…trying to sell him a ticket without knowing who he was.

Paulus was the head coach of FC Edmonton for two years, guiding the team through its first 37 matches of the CPL era before stepping down. Prior to that, he was an academy coach and still maintains a focus on youth development even outside of the club, where he’d spent nine years training the next generation of YEG talent.

And no, he didn’t buy a ticket.

Valour Kickin’ It To The Kids

The ‘shoes off’ chant has taken place around the league, and it can be frequently heard at both York United and Valour FC matches. This month saw the Red River Rising take things to a new level, however, turning the chant into a means to donate footwear to those in need.

The end result was a van filled to the brim with donations, and I think that another round of applause for both Red River Rising and Valour FC is deserved for jumping on the opportunity and doing some good.

We know that TD Place gets absolutely rocking for home games, and we know that they have an inflatable dinosaur named Wally who often pops up on broadcasts, too.

Until this month, however, I hadn’t seen the absolutely stellar addition that is the Olliewood sign:

Ollie Bassett has been collecting Team Of The Week awards like Pokemon, with the 24-year-old rising to be one of the league’s top midfielders following his arrival from Pacific. We called the move from first to worst back then, but now that Atletico Ottawa is in the top spot…yeah, this is Ollie’s world. We’re just living in it.

This summer has also been a great one for Atletico Ottawa fans highlighting their creative side, with the familiar red-and-white enjoying focus in other artistic mediums, too.

We want to give a highlight to Elizabeth Morris for the painting of Malcolm Shaw below, while Atletico Ottawa fan Jon also painted a solid Warhammer figurine in Otletti colours after watching a game.

Sidebar: apologies if this isn’t Warhammer. I am officially not hip anymore.

When Molham Babouli scored against his former side Forge FC, a camera cut captured the return of Yorky…who was, as a Forge fan, looking absolutely devastated it.

You’ve kind of got to see it:

For the uninitiated, Yorky was a terrifying off-brand mascot that entered during the York9 FC era and exited through a Simpsons video. He was canonically killed off to eventually pave way for a more suitable mascot, though nothing has filled his cold, steely Zlatan-inspired boots so far.

Former York United staffer Nate Hershenfeld confirmed that the Yorky helm seen in the Forge fan’s possession is a knockoff, and we can confirm on our end that Yorky’s head – the real one – was last seen on a pike.

We’re not sure if that explanation helps, actually.

Returning focus back to Molham Babouli, when the Nine Stripes made the shock announcement that they’d signed former Forge striker, it made waves – and rightfully so.

Fans who have frequent York Lions Stadium this season, however, know that the York United event staff housed a real doppelganger of the former TFC striker. With Babouli’s arrival, we finally got to see the two in the same room together, proving that there wasn’t a Clark Kent / Superman situation going on.

If this guy can play ball, please use him as a false nine and watch the chaos unfold as defenders try to mark the real Babouli.

This Kid Cosplaying As Sean Rea

When one Valour FC fan went to pick up their son from the daycare, they found their child sporting a marker moustache and doing a Sean Rea crowd song, complete with questionable language for a kid – but damned if that isn’t adorable all the same.

CF Montreal loanee Sean Rea has been enjoying a solid follow-up loan campaign in Winnipeg, where he’s proven to be one of the most quietly potent midfielders in the league. Contributing five goals and seven assists in twenty-one appearances, he’s surely destined for a go with CF Montreal next year.

Until that time, it’s cool to see that Rea is building a fanbase in Winnipeg, and rightfully so!

There was a fan crossover between the two clubs following York’s win over Edmonton last month, and it only reignited our hopes that the ultimate York clash might one way be on the horizon.

We’d still love to see the Halifax Wanderers do the same against FC Halifax Town (or any of the numerous Wanderers sides across the pond, for that matter), though such an endeavor incurs significant cost for what is, essentially, a loose connection in name.

I’m easily entertained, though. I want it.

The Canadian Premier League sees its fair share of bad weather, but Atletico Ottawa’s home match against FC Edmonton (who themselves have had little luck with weather this year) was something else.

Beyond the broadcast cameras getting lens-drenched, the wind and rain also saw some of the advertising boards topple over onto the pitch, with Nathan Ingham somehow still being up to making the save.

I’ve certainly seen the boards shift inwards during high winds, but I’ve never quite seen them get tossed around like that! Luckily, nobody was near the boards when they went over – and with the assistance of some matchday staff and a certain goalkeeper, things were put back into place and the game continued.

Unlike a 2019 FC Edmonton match held in a storm, the camera crew stayed around to complete the broadcast, too!

Okay, this is cool: here’s Aribim Pepple talking about what it means to have a professional opportunity in Calgary, all the way back before he signed with the club at the tender age of sixteen.

(I remember writing that article on a quick break in the hospital and I wrote Pebble in the title. That fact still haunts me.)

Pepple would go on to carve out quite the start to his professional career, earning trials with Sheffield United and Leicester City back in 2021 before eventually landing with the Getafe U-19 squad in Spain. His return to CPL circles this year saw him smash a scoring streak record before he inked a deal with Championship side Luton Town.

Now on loan with Grimsby, it’s wild to think where Pepple would be had the CPL not launched when it did. It gave him the platform to succeed, and he’s used it as a launching pad.

The Canadian Premier League recently launched a Play As You Are charity campaign with donations going towards the Canadian Centre for Gender and Sexual Diversity, an all-around fantastic cause.

Each of the eight CPL teams have one special edition player kit up for auction, and Wanderers goalkeeper Christian Oxner turned a few heads with what appeared to be an outfielder kit with his name on it:

It wasn’t too long after I pointed out the forbidden nature of goalkeeper outfielder kits when the CPL corrected the gaff, with a black goalkeeper kit graphic being put up instead.

We’re not saying that kit doesn’t exist, though.

The Didic And Bustos Bromance Is Real

When six-foot-six defender Amer Didic joined Pacific FC for their championship intensity, the Tridents knew they’d found a suitable replacement for Lukas MacNaughton. What nobody knew at the time, however, was that the big man would form a great friendship with Marco Bustos.

Several months down the line (and plenty of pics of the duo later), and we now have this:

With September now here and the Mark Noonan CPL era beginning, there’s no telling what the future holds. We’re sure there’ll be plenty of happenings to cover.

With Casual Friday falling on a long weekend, I wanted to wish you all a stellar weekend, too! I’m sneaking in one last big BBQ for it (and turning 31, oh no).