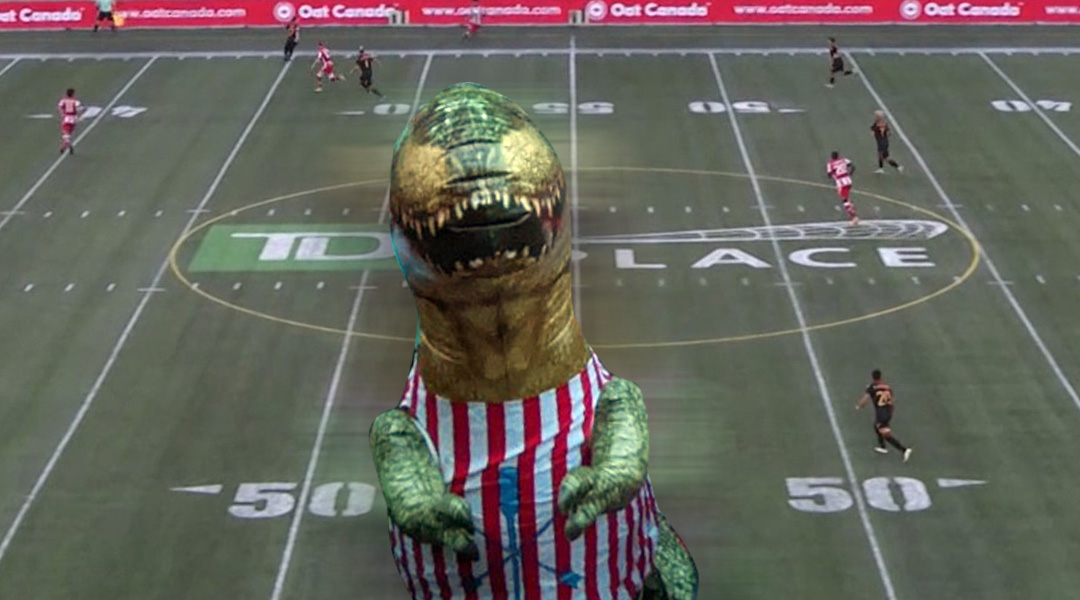 The second-ever Casual Friday is here, offering an informal look at the sidebar moments surrounding our league or, in lieu of that, other CanSoc content that made me think “eh, what the hay.”

Without further ado, here’s a few highlights from the second half of what has been a hot and hectic July!

York9 FC Still On The Tongue

We may be one-and-a-half seasons into the York United era, but the shadow of York9 FC still looms: during the club’s home match against Pacific this month, commentator Iain Hume got himself tongue-tied between the two.

Adam Jenkins was step in to Hume’s defense, point out there were still York9 FC-branded VIP chairs in the background of the broadcast. We deem that a valid save. (they’re comfy, too – we definitely never sat in one just to test it out)

Still, the overlying brand confusion must be food for thought for a rebranded club still trying to garner a following to fill those neon green seats. Or the red ones of the stadium. Or the metal ones of the supporters’ end.

If people like Dwayne De Rosario, Liam Fraser, and Richie Laryea can come out to YLS and support local soccer, your friends can too!

FC Berlin Gets A Honduran Doppleganger

It’s York9 FC Egypt all over again: this month it came to the attention of Santiago Almada that a small amateur Honduran side had copied the logo of Kitchener, Ontario’s FC Berlin. What’s more, they made a shockingly amazing hype video for one of their upcoming games, too.

You’ve really gotta see it for yourself:

The Mortal Kombat-heavy hype video certainly confirms that the Honduran team has blatantly nabbed the logo of its Canadian counterpart, though they’re clearly not the only copyright violators: we’re still wondering if the Arsenal won the ‘Clasico de Berlin’.

Not that Canadian clubs would do that. Right, Saint Catharine’s Roma Wolves?

Atletico Ottawa’s midweek clash against Valour saw TD Place covered in gridlines for the ol’ pigskin, with yellow soccer lines painted on top. It wasn’t a pretty sight, so it was no shocker when Valour starting whipping out Blue Bombers jokes.

Then again, I suppose Atletico Ottawa does do things a little different – after all, they’re the only club who had both goalkeepers pose for squad photographs in outfield kits. Add those headshots to the cursed content pile next to Easton Ongaro in a Cavalry kit!

While the aforementioned Atletico Ottawa match may have been noteworthy for its grid lines, commentator Nigel Reed – who is fantastic, by the way – also saw something else unusual: a certain prehistoric beast in the stands at TD Place.

Listen, we’re not saying Atletico Ottawa supporters are wild, but if that album-cover and/or horror film above is any indication, they definitely know how to party. (but actually)

Wally isn’t the first inflatable supporters’ mascot to grace a CPL stadium, however, with Generation IX having brought out a green alien back in the days when they also brought themselves to matches. Like Yorky, however, he seems to have gone off to his home planet.

The Canadian Premier League and its clubs have always done a stellar job championing great causes like Black Lives Matter and Every Child Matters, and this year has been no different: between Halifax Wanderer’s stellar New Canadian Night initiative and the many Pride Nights that graced the league, we just felt like the CPL and its eight member clubs deserved some extra kudos.

There’s been even more great initiatives in the time since, like Halifax’s back-to-school donation drive and Atletico Ottawa helping a dog find his fur-ever home.

We’d also like to give a shout of appreciate to the coast-to-coast supporters’ groups who participated in Prideraiser, too. Y’all do amazing work. This is everybody’s game!

That Time When Fumpa played for 23 minutes and cracked TOTW.

New Halifax Wanderers forward Lifumpa Mwandwe did exactly what you’d want a new star player to do: reach team of the week heights in his first week. Bizarrely, however, Mwandwe only featured for 23 minutes in a 1-1 draw against the last-placed team to get there. While he did look sharp and won a game-tying penalty, cracking TOTW in such a manner is, well, soft.

With Halifax triggering Lifumpa’s release clause and hyping him up as a player who might be able to turn the club’s season around, there’s a large incentive to boost his profile – but tossing him into the TOTW seems an odd choice.

Still, it’s good news for those who want the CPL to emulate MLS: there, Lorenzo Insigne was just named to the MLS All-Star team before making his debut with Toronto FC. To the CPL’s credit, at least Fumpa actually got a few minutes before earning league accolades!

Local Club Dips Balls Into Community (Editor’s Note: Absolutely Do Not Forget To Change This Title)

We’ll end the segment on a touching note: when York United fan and kid’s soccer coach Juan Balvin tweeted about purchasing a bunch of miniballs to give to his players, Nine Stripes President Angus McNab stepped things up a notch to make sure all the coach’s students would get one.

The Derbystar York United mini-balls previously acquired by Juan will be refunded by the club, who will also ensure he has a ball for each student. Unsurprisingly, they’re now out of stock on the website.

The York United front office makes a lot of fantastic moves, with this being the latest of many. They’re doing the right stuff, even if they’re having difficulty carving space for themselves in Toronto’s competitive sports market.

Okay, that’s about it!

I really hope nothing wild happened from Thursday onwards because this is completely and unabashedly a pre-written article for while I’m away this weekend and absolutely did not bring my laptop. It is my partner’s birthday celebration. If you could tweet some kitten photos at Northern Tribune, she would love that.