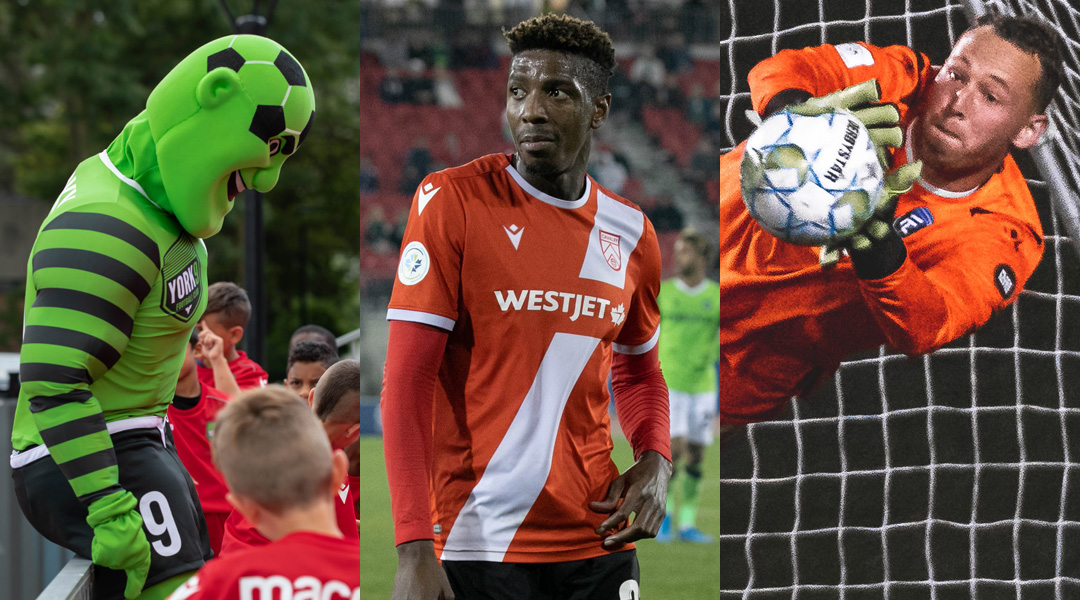 It’s that time again! We’ve probably missed a few wild things here and there, but between the Canadian Premier League playoffs, Canada’s upcoming World Cup adventure, and Twitter lighting itself on fire we’ve been a bit busy.

If you’re not familiar with Casual Friday, it’s exactly what it sounds like – an informal roundup of some of the weirder Canadian soccer moments.

Remember the rise and very predictable fall of NFTs? Well, even the CPL isn’t immune…by a few degrees of separation, at least.

Former Cavalry FC striker Dominique Malonga was recently unveiled as a brand new signing for amateur side AS Torino Calcia, where he’s a statement arrival for the Turin-based club.

Related: Malonga Was Convinced To Join CPL Over FaceTime Chat

The contract for the former Cavalry striker – once nominated for a CPL Player of the Year award – contained an unusual twist, stipulating that Malonga must consent to being digitized as an NFT for the club. He’ll be the first player in club history to become an non-fungible token.

The club is expected to reveal more information about its digital partnership with an NFT company shortly. While that’s an interesting development on the digital side of things, Malonga is keen to focus on the pitch, where he made a name for himself with the Serie A side Torino back in the day.

Nothing ages someone like having to write about an NFT requirement in a player’s contract, though.

Former FC Edmonton goalkeeper Dylon Powley opted to leave his professional playing days behind after going his separate ways from Atletico Ottawa, with the former pro now stepping forth into a coaching career instead.

The 26-year-old went to Clarke Stadium to watch FC Edmonton’s final match of the season, and the experienced shotstopper went to catch an errant ball in the stands. He then broke his finger.

Happens to the best of us, Dylon. That’s why you wear gloves!

Football tattoos are quite a commitment, but that didn’t stop a Twitter user named ‘Coach Juan’ from offering to tattoo the York United club crest upon his body if his beloved side made the playoffs.

Evidently buoyed on by the prospect of fan ink, York United went on to absolutely boss the last month of action. Unfortunately, the fine form came too late in the campaign to push the Nine Stripes into a playoff spot.

The guy had also offered to tattoo Yorky on himself if they make the finals, but as of right now the only Yorky who might have attended that is, uh, currently a Forge fan.

The Halifax Wanderers have done a wonderful job engraining themselves with the city they call home, and this month saw that relationship go to the next level with the addition of Halifax Wanderers merchandise being added to the city’s airport.

That right there? That’s a big green flag on the ‘you’ve made’ chart of sporting cities.

Fair play to York United’s Angus McNab for tagging Toronto’s airport, but I think we can file that request under the growing amount of lost luggage over at Pearson.

Halifax Wanderers star Joao Morelli had himself a night on twitter while watching the UFC bout between Israel Adesanya and his countryman Alex Pereira. When former One Direction member Zayn Malik called Adesanya the goat, Morelli told him to shut up (but refrained from the classic ‘shut up, you egg‘).

He followed up when Conor McGregor incorrectly predicted a win for Adesanya, tweeting that ‘that’s what happens wne you drink s— whiskey’. Morelli never really holds back online, having once called CPL referees an absolute joke on the platform.

This Brazilian Really Wants To Save FC Edmonton

By virtue of covering the Canadian Premier League, we got a lot of messages from footballers hoping to get an in with CPL sides.

Pedro Bastos is certainly one of the more interesting ones we’ve received.

The 21-year-old Brazilian midfielder describes himself as a diehard fan FC Edmonton, and even sent us a bunch of photos of him watching various matches on OneSoccer. We’re not sure if his highlight reel will turn any heads, but anyone who personalizes a message about restoring FC Edmonton to glory – even though the situation is well out of any player’s control – is going above and beyond in terms of player pitches.

If you haven’t seen York United’s amazing tell-all interview with Yorky himself, do yourself a favour and click the video right above this text.

While York United swore never to bring the humanoid cyborg time-traveling mascot back into the fold, when a Forge fan started cosplaying as Yorky (but as a Forge fan) at Tim Hortons Field, actions had to be taken.

“I’ve wanted to do something on Yorky for a long time, just because it’s playful and you can get very creative with the storytelling,” Eoin O’Callaghan told me in an article I definitely didn’t get around to remotely finishing. “It’s on-brand for us and in line with that wry, wink-wink nature of much of our video content.”

Whew! That’s a fair bit of catching up on the odds and ends, though I’m certain to have missed a bunch of weird things that happened. Not to worry, though – if this past week is any indication, the world is only getting weirder.