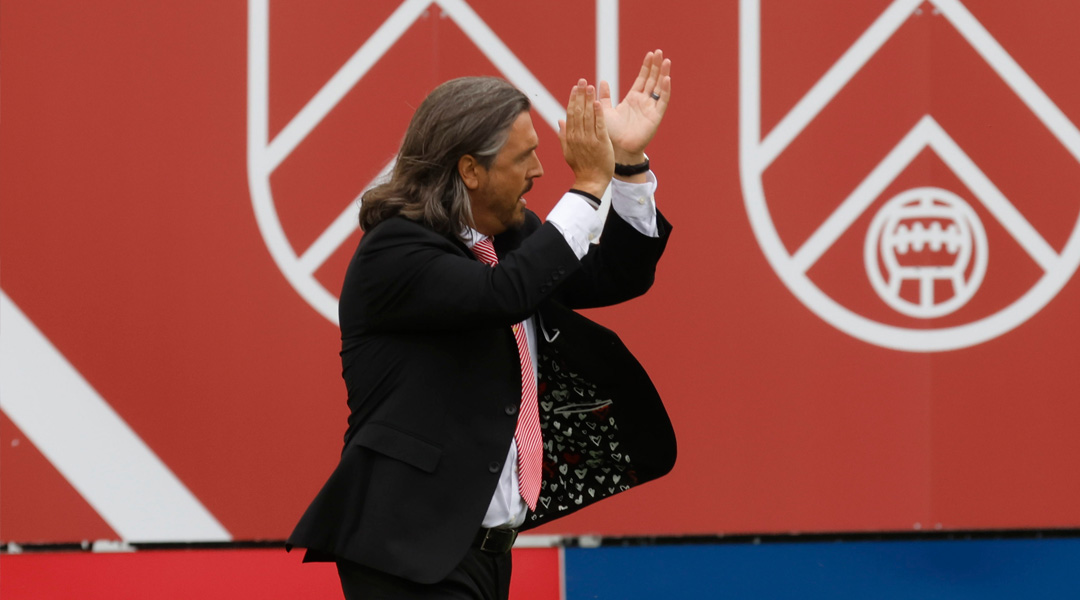 Cavalry head coach Tommy Wheeldon Jr. is back in the office, recharged and ready to help lead the CPL side for a fifth season.

The club’s gaffer recently spoke with OneSoccer analysts Gareth Wheeler and Oliver Platt about the how and why behind Cavalry’s transfer decisions thus far, while also shining light on not just one likely player departure but a change of the armband, too.

Without further ado, here’s a recap of his discussions from OneSoccer Today:

Tommy had a lot to like about the squad that went through the 2022 CPL season and set a club record unbeaten run of twelve matches, coming just two points short of being regular season champions and ‘a decision, or a goal’ away from securing passage to a second CPL Final.

“We know that there’s quality there, it just comes down to chemistry” reflects Tommy on the roster. “So how do we do it? We make sure that we have the right people in it, who are still in and who are trying to achieve what we’re trying to achieve, and those that kind of just have one foot outside the door, you allow them that opportunity to advance what they need to do in their own personal life.”

He says the 2022 squad had a chemistry that was somewhat disrupted through injuries and mid-season sales, but describes the core as being within touching distance of having a memorable season – and it’s hard to argue with the math, though it’s also clear that change within the squad was needed. He hasn’t held back in that regard either, with several players departing.

Wheeldon offered reflections on how and why behind some of them: Elijah Adekugbe needed a fresh start after a somewhat stalled post-injury comeback season and Elliot Simmons simply came down to to a breakdown in salary negotiations, while some others were labelled as decent support players who didn’t quite have the impact Tommy had been hoping for.

Since the club brought in several replacements for its long-term injuries, the player roster ballooned north of where Tommy had wanted it – and so it was time for what he described as a healthy clearance, even after the club sold two of its core players mid-season.

“I know it probably wasn’t the right time or place to sell on Aribim Pepple and Victor Loturi, but when is?” Tommy ponders. “I think what we’re trying to do, as we’ve seen with Canada in the World Cup, is we’re trying to create that pyramid of players for the domestic teams. Sometimes those opportunities come at the wrong time, so you’ve got to be sometimes selfless and selfish.”

All the same, Tommy says clubs don’t have to split development and winning, believing the side has done well to manage both – with one example being Joel Waterman, who was sold to CF Montreal after the inaugural campaign and was included in Canada’s World Cup squad in Qatar.

With the last campaign now in the rearview, Tommy has his eyes front and forward to a season that will see the club compete in both the Canadian Championship and the Canadian Premier League, where an expansion to continental qualification could allow Cavalry to reach the Champions League solely through regular season standings, postseason be darned.

“There’s three exciting competitions, and you need to have the ability to compete with MLS side or that ilk in the Canadian Championship, Concacaf. You’ve got to be able to go away to Halifax and have players who can play there, and go away to Tim Hortons Field and Pacific and pick up points. You’ve got to be ready with chemistry, fitness, and form going into playoffs,” offers Tommy.

The 2023 CPL season will also see the introduction of a monetary prize and trophy for the regular season champions in addition to that added continental qualification enticement, though it isn’t like Tommy wasn’t reaching for the top each year, anyway. All the same, he recognizes that the league’s changes to reflect the importance of the regular season was a smart play by the new commissioner, and one he’s keen to go for.

When it comes to areas of focus for the current roster build, Tommy is blunt about one spot that needs filling: defense.

“We were the second-highest goalscorers in the league behind Forge, but I think we’ve let in too many soft goals if I’m honest. As one of our self-reflections, we gave away too many goals in transition,” he says. “Look at the Ottawa game where we lost three-nil and had 70%-odd possession and chances. It was ridiculous, so we’ve got to stop that. There’s always going to be anomaly in games, but if there’s a pattern, which there was, it’s that we gave away too many soft goals.”

Tommy says the club will always be an attack-minded team, but he wants the 2023 Cavalry squad to be much tighter at the back and stifle enemy attacks before their counters prove potent. Beyond Karifa Yao, it looks like the club may also need to replace Mason Trafford, whom Tommy mentions is looking to transition to a front office role to stay within the game.

“We’ve got the recipe when it comes down to scoring goals, set plays, and a little bit of creativity, but we’ve got to be a little bit more ruthless in our defense.”

The defensive end was also aided by the tireless legs of Victor Loturi in midfield, though we’ve heard some suggestion that Tommy’s already secured some talent there beyond the arrival of Jesse Daley. He’s also keen to keep an eye on the next generation in Calgary, with players like Goteh Ntingee and Gareth Smith-Doyle returning, while his brother Jay Wheeldon keeps him in the loop for up-and-coming talent from the AMSL Cavalry U-20 side

“We’ve set a vision, we’ve set a structure. We’ve got people that are bleeding the red that we fight for, and we’re going to keep going. I think it’s just minor tweaks here and there on the roster and the way we approach the season, not major. We’re on a great pathway.”

One player who has consistently progressed forward on that pathway pathway is Marco Carducci, who began the year with a cancer diagnosis and ended it with his second golden glove award. Impressed by his feat of character and dedication, Tommy offered him a three-year deal and revealed that more than one MLS side had inquired about the 26-year-old goalkeeper ahead of the 2022 CPL season.

In fact, it was doing the medicals for that MLS interest which led to Carducci’s fast cancer diagnosis, surgical treatment, and speedy recovery, with the goalkeeper recovering quite quickly before leading the Alberta-based into yet another postseason-reaching campaign. He’s worth the big bucks in a salary cap league, and Cavalry recognized it.

“We know what he can do. We’ll make him one of our best paid players ever at this point, because that’s the kind of commitment that he’s shown to us and we have to do for him. If another club wants to come in for him, we’ll never stand in the way. We’ve shown that as a club. Right now, he’s invested in our club, he’s terrific, and what he needs to do next is literally take that armband. I think that’s his next stage.”

The Alberta-based side is expected to begin revealing more of its roster announcement as the 2023 Canadian Premier League season gets closer, with preseason will begun on February 1. For Tommy, of course, the work is already well underway.