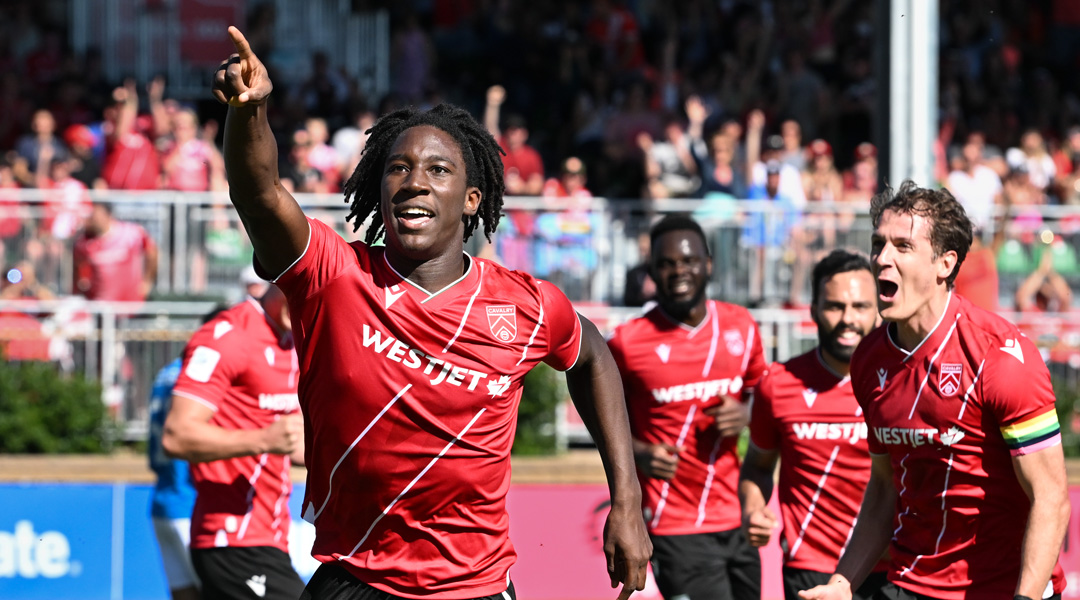 After being gingerly eased back into the lineup following his return from Spanish football, the 19-year-old has set the league alight with a six-goal haul from his last five matches. Cavalry has rapidly climbed up the rankings in that time, banking 13 of a possible 15 points.

Last night saw the Kettering, England-born striker score in his fifth straight match, setting a new Canadian Premier League record. The 19-year-old was previously level with Tristan Borges and Terran Campbell, but now lifts himself above the pack with a chance to extend the streak against Atletico Ottawa next weekend.

Borges and Campbell had scored in four straight matches during the league’s first season, with Borges the first to reach the landmark in the spring season, while Campbell’s shift from midfielder to striker saw him do it in the fall.

Pepple’s historic run comes in his third season with the side, having originally signed as a 16-year-old youth prospect in 2019. Fittingly, his arrival to professional football came after scoring five goals in his last five USL2 matches with the Calgary Foothills.

Pepple went on to make 15 appearances for Cavalry throughout the next two seasons before trialing with both Sheffield United and Leicester City in 2021 before eventually landing with the Getafe U-19 squad in Spain, where he scored on his debut.

Pepple now holds first place in the CPL’s goalscoring streak record books, with Borges and Campbell in a two-way tie for second. There are five athletes who have scored in three consecutive matches: Alejandro Diaz (at the start of this season), Easton Ongaro (who did it five times), Akeem Garcia (in his Island Games Golden Boot form), Alvaro Rivero, and new York United striker Osaze De Rosario.

Pepple’s form has him sitting second in the golden boot race, just one behind Alejandro Diaz after both strikers scored last night.