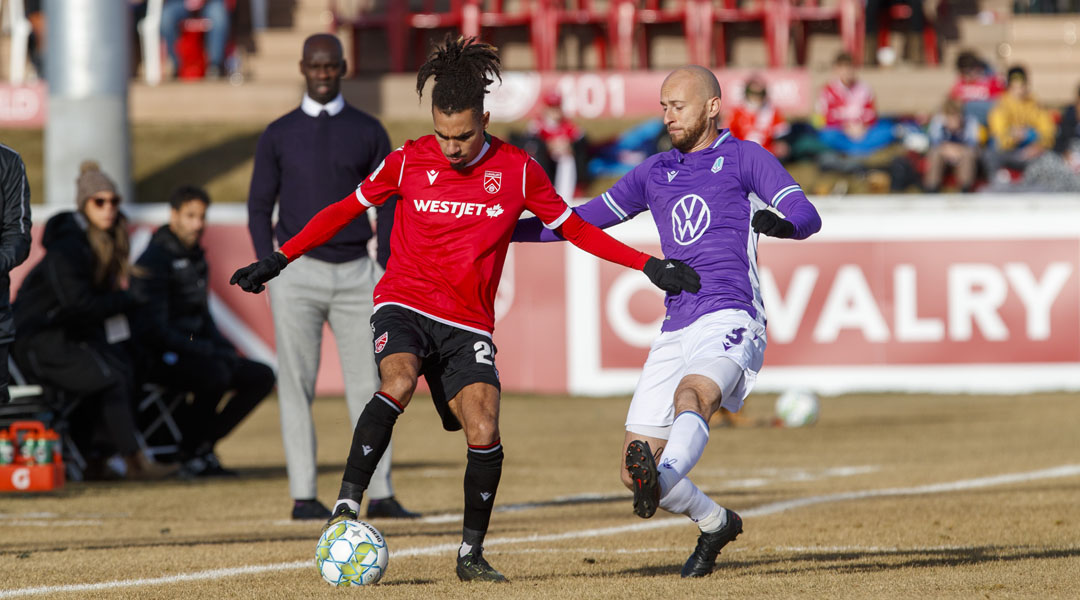 Canadian Premier League side Cavalry FC has announced no less than six player departures following the club’s third campaign, which came to an end through a semi-final playoff loss to Pacific FC last weekend.

Farsi, 21, followed an unassuming arrival last year with a U-21 Canadian Player of the Year performance at the Island Games. He made 38 appearances for the club across two individually superb seasons, with the right-back scoring once across each campaign.

The CanPL.ca website is reporting that Farsi and his representatives have had multiple discussions with Cavalry FC brass about a new deal, with both parties still some ways apart. In the meantime, Farsi is reportedly hopeful for a move to Major League Soccer or Europe, with Cavalry FC (and, likely, other CPL sides) likely to keep a door open for a late deal should those moves falter.

Also departing is 25-year-old dual national Ahinga Selemani, who arrived to Spruce Meadows following a short stint in Gibraltar. The centre-forward averaged thirty minute shifts across 18 appearances, scoring three goals during his time with the side. While he had sharp moments, it’s unsurprising to see Cavalry seek out a replacement who might carve out more game time.

Having just arrived in September, Vancouver Whitecaps U-23 product Nicolas Apostol did well to feature in seven league matches before his own departure. He was the fourth reinforcement made by Tommy Wheeldon Jr. in the summer, giving the roster some replacement depth following the departure of U SPORTS-bound Daniel Kaiser. It was a good showing for a lad who, by all counts, is likely set to rejoin the Whitecaps at the youth level.

While Brazilian forward Richard Luca signed in 2020, the COVID-19 pandemic limited the 23-year-old’s impact to the 2021 season. He signed a new multi-year deal earlier this year, with the club evidently opting not to exercise a club option. He made 18 appearances as he settled into both match fitness and the Canadian climate, with his only goal coming against an FC Edmonton side that had almost signed him. With the club seeing limited returns, his departure isn’t a shock.

Former Pacific FC forward Jose Hernandez is the fifth of the bunch to depart, with the 21-year-old having made 22 appearances over his two seasons at Spruce Meadows. The league’s first-ever intra-league transfer won’t count for U-21 minutes next season, having previously accumulated 633 minutes of them for Cavalry and 682 with Pacific. It’ll be interesting to see if any CPL side wants to take a chance on the youngster without the perk.

CF Montreal loanee Karifa Yao was the only one of the six who was certain to leave, with the 21-year-old centre-back having looked solid across 26 league appearances for Cavalry this season. Having led the side for both tackles and duels won (and clearances, too!), it was made clear that Tommy Wheeldon Jr. would love him back, though he is expected to stay with the CF Montreal first time next season.

The Alberta-based side becomes the second to announce several roster releases, with the Halifax Wanderers having confirmed six departures of their own earlier this week.

While there are more departures likely to come, Farsi is sure to be the biggest talking point thus far: he’d certainly be a budget-friendly option for an MLS side, with former Cavalry defender Joel Waterman having adapted well to a similar rise upwards. Still, it remains to be seen where the attack-minded full-back ultimately ends up.

Cavalry FC finished second in the regular season this year, but – just like in the two previous seasons – bowed out in the postseason stage without any silverware.