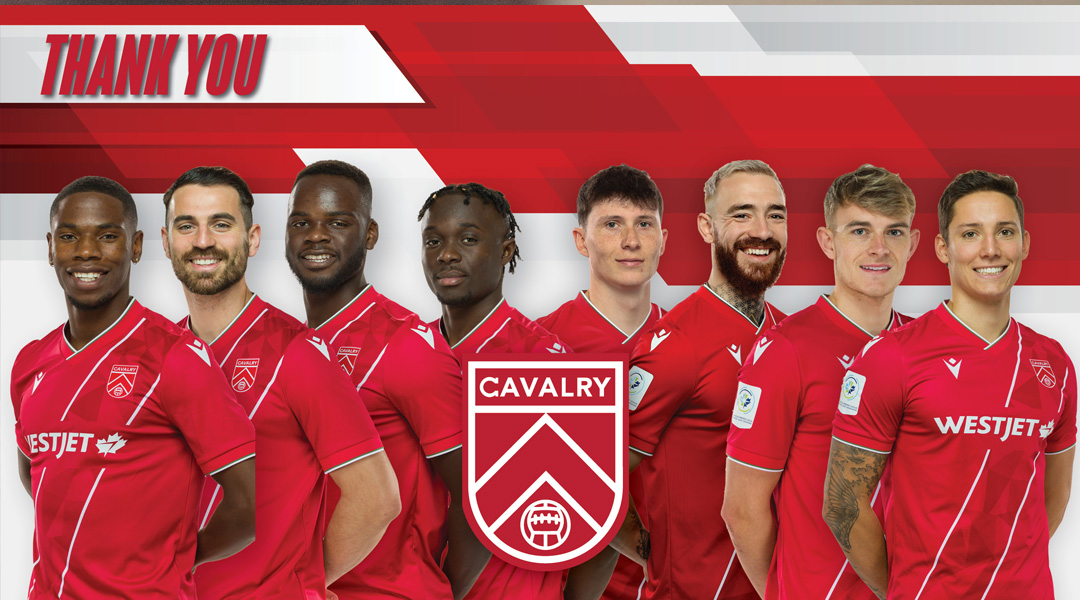 Canadian Premier League side Cavalry FC is making some tough roster decisions after coming up short in the club’s fourth-consecutive postseason run without a championship win.

The Alberta-based side has now confirmed the departures of Elijah Adekugbe, Elliot Simmons, David Norman Jr., Joseph Di Chiara, Tom Field, and Anthony Novak, whilst acknowledging the end of the loans for CF Montreal duo Jean Aniel-Assi and Karifa Yao.

Here’s our thoughts on the eight outbound from Spruce Meadows:

The departure of club original Elijah Adekugbe had been confirmed by the midfielder three days ago, with the 26-year-old now departing after 55 appearances in all, 22 of which came this year alone.

“I got to live a dream in my hometown and for that I’m grateful,” said Adekugbe online. “Thank you Cavalry, you turned a boy into a man and gave me my start on this journey. But all good things come to an end. I appreciate everyone that supported me during my time with the team, but now it’s time for change, more growth and new inspiration.”

Defensive midfielder Elliot Simmons was near-constant starter under Tommy Wheeldon Jr., with the Canadian having made 65 appearances since joining from the Halifax Wanderers following the 2019 season.

The Luton-born midfielder has excelled in an anchor role for Cavalry FC, and his departure suggests that he was lured away by another club moreso than passed over by the gaffer. It’ll be interesting to see where the 24-year-old lands next.

This season saw David Norman Jr. used as both a left and centre-back, though his minutes certainly fluctuated in a campaign that ended with a controversial playoff red card.

The 24-year-old former Inter Miami prospect had joined Cavalry last season, accruing 48 appearances. Prior to that, he saw time with Inter Miami and Vancouver Whitecaps, and had been loaned to both Pacific FC and Scotland’s Queens of the South. Now he looks set to travel yet again.

Veteran midfielder Joseph Di Chiara missed the first half of the campaign through injury, with his second year at Spruce Meadows not seeing many ninety-minute shifts. Di Chiara had signed with the club following a head-turning campaign for York United at The Island Games, though his time at Spruce Meadows never hit the same heights.

Still, the feisty midfielder is an experience Canadian midfielder who can win possession – and fouls – in the middle of the park, so it’ll be interesting to see if another CPL side might give him a landing spot.

English left-back Tom Field missed this season following a knee injury which required surgical intervention, and with Bradley Vliet excelling as a replacement it looks like the position has officially been usurped.

Field made just twelve appearances after arriving from Dundee FC in 2021, with his stint at Cavalry FC marking his first experience abroad. Having once represented the Republic of Ireland at the U-16, it’ll be interesting to see what level he lands at once he is fully recovered.

Canadian Premier League striker Anthony Novak also missed out on the season following surgery to repair an ACL tear, with the Pickering native’s influence at Spruce Meadows being limited to four goals in 28 appearances last year.

The former Forge FC striker has shown a flair for big goals and big moments, and one feels as though he still has a lot to give at the CPL level. Like Ali Musse, perhaps a CPL comeback could be on the cards

Young 22-year-old CF Montreal loanee Karifa Yao enjoyed another individually stellar seasonin Cavalry’s FC defensive end, with the centre-back collecting 28 appearances this season. While it’d be lovely to have him back in CPL circles next year, Yao will be hoping to contest for a Major League Soccer roster spot with his parent club. That was always part of of the plan.

There was plenty of fanfare when Cavalry secured Jean-Aniel Assi for a season-long loan, with the teenage winger expected to be a high-ceiling depth option for the Alberta-based side. Assi’s contributions throughout the season came in spurts, with the fast-footed winger completing 21 appearances, none of which came as a full 90.

Assi’s contributions throughout the season came in spurts, with the fast-footed winger completing 21 appearances, none of which came as a full 90. He had a nice spattering of flashy moments on the pitch, but it was clearly a growing year for the 18-year-old.

The club has now parted ways with four of five athletes who suffered long-term injuries this year, with Tyson Farago retiring earlier this season and Fraser Aird still under contract.

With Cavalry FC being ousted from playoffs this year following some moments that Tommy Wheeldon Jr. described through colourful language, the club and its ownership evidently haven’t been afraid to dive deeply into roster changes ahead of the fifth Canadian Premier League season.