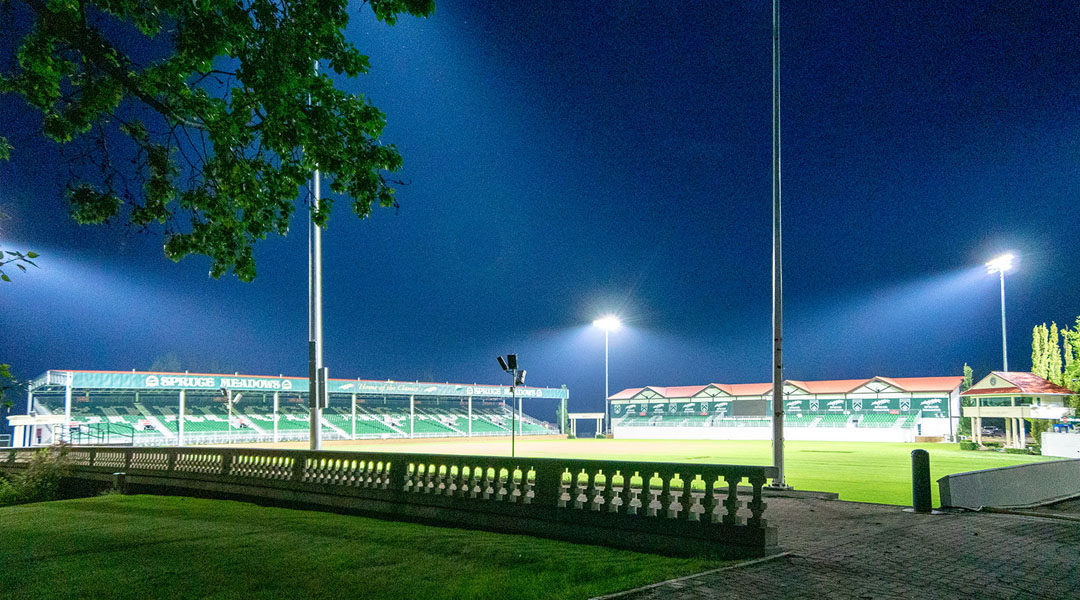 Cavalry FC has announced the installation of five new floodlights that surround the ATCO Field pitch at Spruce Meadows, which was also also recently re-sodded.

The stadium upgrade is ready and waiting for the Alberta-based side to return back from its bubbled start to the 2021 Canadian Premier League season in Winnipeg, Manitoba.

The inaugural Canadian Premier League season saw Cavalry FC play host to only one temporary floodlight at ATCO Field, which meant that the high-speed cameras used by OneSoccer captured matches at a framerate which could make things look fairly dark should the sun set – like when Cavalry FC took on the Montreal Impact in the 2019 Canadian Championship.

The darkness of the pitch that night saw an intrepid fan named Brad Anderson purchase a kit with the name and number “Floodlight 1” on the back, with the club celebrating this week’s announcement by getting him a new kit: “Floodlights 5”.

We knew we had to make improvements and we got to work. We have a short construction season and a shorter growing season so to get all of this done is a bit of a blessing.

The club had bases for all five floodlights installed in the fall, with the towers themselves being imported from the United States. The re-sodded pitch (made with Kentucky Bluegrass, also known as smooth-meadow grass) was planted in May, and will be ready by the time Cavalry FC flies back in at end of July. Spruce Meadows has also seen other improvements this offseason, including new sewer and water lines.

With things looking good at home, the Cavalry FC squad will be hoping to start on the right foot in Winnipeg: the league has opted for a month-long bubble start to the season, with each team’s first eight matches taking place at IG FIeld. After that, league officials are hopeful that provincial health restrictions will be eased enough for clubs to return to their home markets with fans in the stands.

To that end, Allison states that the club has retained almost all of its season ticket holders despite the uncertainy that the COVID-19 pandemic has caused. He reports that with the team now 100% vaccinated, the club just needs to wrap up its ‘unfinished business’ in Winnipeg prior to a long-awaited return to Spruce Meadows.

The club isn’t the only one one to undergo stadium upgrades this offseason, with York United’s stadium in the midst of some hefty renovations that will see a running track removed, the pitch expanded, and new turf installed.

Pacific FC’s homeground has taken on a new name this offseason, while the expansion team in Saskatoon has begun pitching stadium concepts with the aim of fielding a team in a brand new stadium come 2023.

Cavalry FC has currently announced 21 players, most recently revealing the arrival of former Valour FC forward Ali Musse. The team has already entered the bubble in Winnipeg, and is in preparations to kick off their season against York United this Sunday.