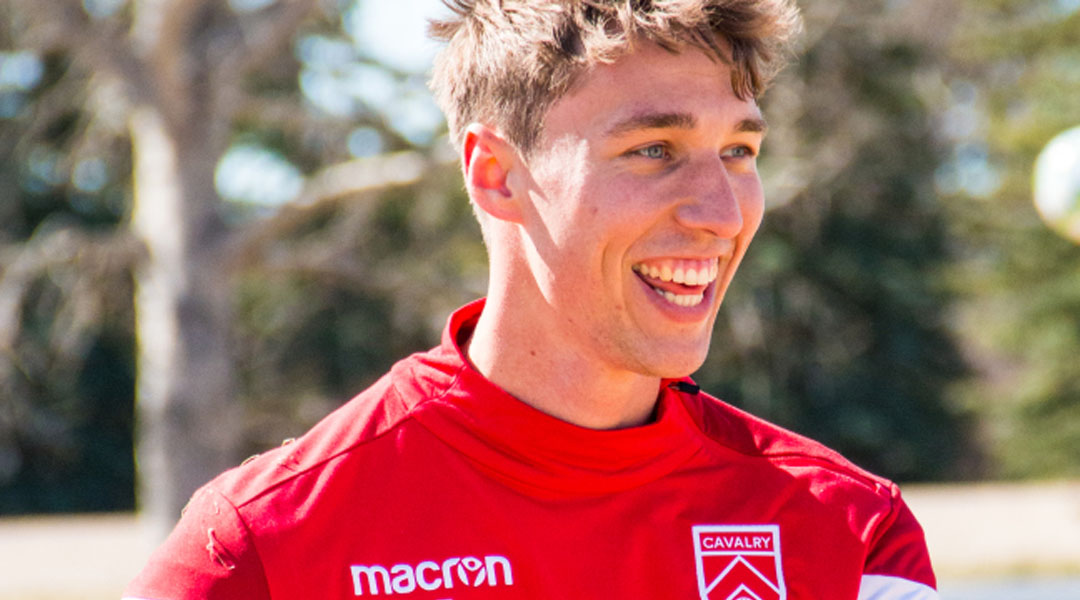 In an interview with Dutch outlet Elf Voetbal, new Cavalry FC defender Daan Komp revealed plenty about his journey to Cavalry and his expectations on where his time in Canada could lead.

The 22-year-old defender was announced by the Canadian Premier League side just one day after it was revealed that centre-back Dominick Zator was departing, with Daan Klomp stating that his move abroad represented a great opportunity for him to develop.

This opportunity came following several months of uncertainty for the Leiderdorp-born defender, who had known since April 2020 that his contract with Dutch second division side NAC Breda would not be extended.

While a move to Norway nearly developed shortly afterwards, closed borders caused by the emergent COVID-19 pandemic saw a contract offer put on indefinite hold. It seemed like he was still set to continue on closer to home, with Klomp having a trial in Germany followed by offers in Sweden, Finland, and a number of Dutch amateur clubs.

It was actually all the way back in November when one of his agents made contact with Cavalry FC, though things didn’t work out at the time. In January communications opened back up, and the paperwork was done quickly enough that Klomp was announced on January 27, 2021.

The defender’s journey to arrive in Canada took a wild route in a similar vain to Ollie Bassett, with his commute to get from the Netherlands to Canada ultimately taking place over four weeks in April 2021: it began in Amsterdam with a plane to Istanbul followed by a two-week resort stay in Antalya, then back to Istanbul before hopping between multiple states in the US which, through the magics of bureaucracy, allowed for him to enter Canada via America.

After those two weeks [at the resort], we traveled from Antalya back to Istanbul. There we were able to catch a plane to Chicago, where we also had to stay another day. From there the journey continued to Denver and finally we arrived in Calgary. At the border we had a long talk with customs. We were even almost sent back. After arrival we also had to spend two weeks in quarantine. I have now been here for about six weeks. Training is going very well. I don’t notice much of a cultural difference yet. Everyone is very helpful and friendly, which is also what Canada is known for. The first impression is very good.

In an extended offseason season where multiple international signings have already been called off due to an inability to secure visas, Klomp’s safe arrival is a big boost to the Cavalry FC defense – especially following Dominick Zator‘s surprise move to York United earlier this year.

While he hasn’t had long to adjust to life in Canada – which isn’t exactly in the most normal of times – Cavalry’s Dutch defender has liked what he’s seen so far. While he acknowledges that the city is mostly known for skating in the Netherlands, he’s found that it has a lot more than that to offer:

I like the culture. The people are helpful and friendly. That’s also the image many people have of Canada. Because of corona I don’t have much contact with other people yet. Fortunately, we will get our vaccine soon. I know some boys who have already been to Vancouver. That is a good eleven hour drive, but it seems to be very beautiful. Coincidentally, I have recently been to Banff. That is a national park in the Rocky Mountains and it is really cool to see such things. It was always a dream to play abroad and Canada is certainly a nice country to do that. For example, I’m an hour’s drive from the mountains here. Those adventures and the culture are nice things to take in.

Cavalry FC fans have been spoiled in terms of defenders over the last two years, especially looking back to the inaugural campaign withJoel Waterman. It’s with the now-CF Montreal man that Cavalry fans will find note some interesting similarities, such as the ability to push upwards as a defensive midfielder.

When Klomp first arrived to NAC Breda after developing with the likes of VV Bevelanders and JVOZ, he was actually training as a midfielder at the time. He then filled in for a central defender, sticking with the new defensive position through the youth ranks all the way into a professional contract and a loan move with FC Oss in 2017.

While an injury kept him limited to four appearances while out on loan, his return to NAC Breda in 2018 saw him make his full debut for the team in a cup fixture against RKC Waalwijk:

I won’t forget that quickly. The match went pretty well, although unfortunately we lost 2-0. After that I played my first league game at home against Ajax. That season they reached the semi-finals of the Champions League with guys like Frenkie de Jong, Matthijs de Ligt, and Donny van de Beek. That was a bit more memorable than the away game against RKC. My teammates at Cavalry sometimes ask what it was like to play against those guys. Of course it’s great to measure yourself against that level. That is just the world top and it is very cool to show yourself against those guys. That definitely tasted like more.

Klomp featured ten times for NAC in the 2018-2019 campaign, though he admits he expected more game time across the season. After a change of staff, he found himself on the outside looking in as NAC Breda was relegated to Keuken Kampioen Divisie. He expected to become a regular starter at that level, but was confused when he was informed that he was to be sent on loan to Helmond Sport instead.

I fortunately did play twenty matches [at Helmond]. We were under a lot of pressure there and that’s not quite my style of play. I’d rather play for the team with ball possession.

It was after his time with Helmond Sport that his agent came to terms with Cavalry FC, sparking a new move abroad for the young defender. It’s fair to say Cavalry FC looks a much better match for his preferred style of play, often putting relentless pressure on the opposition and enjoying good spells of possession.

It was at Helmond where Klomp also proved that he could be put out on the right defensive flank, which will allow Cavalry FC head coach Tommy Wheeldon Jr. to play him in a very similar role that Zator held across the previous two CPL season.

Klomp’s early impression of the Canadian Premier League is that the growing league is still, as expected, behind the European experience – though he states that the facilities and the knowledge are already in place to develop.

It appears Klomp did not arrive to Canada alone, with the defender noting to Elf Voetbal that he arrived with an Englishman (update: this was reportedly Republic of Ireland youth international Tom Field).

While Cavalry FC did not reveal the length of Klomp’s contract when he was first announced in January, the defender tells Elf Voetbal that he has signed for three years. He’s hoping to make a solid impression this season, accumulating a fair amount of game time to build off of the confidence which he grew appearing as a regular for Helmond Sport last season.

Like many Canadian Premier League athletes, Klomp hopes to utilize Canada’s premier domestic league as a springboard to Major League Soccer, noting that he’d like to become a league champion with Cavalry as part of that process. At the end of the day, however, his ambitions ultimately lie with Major League Soccer.

That’s why I want to show myself here and make strides. The lines to the MLS are a lot shorter here. Hopefully we can start the league soon. Fortunately, we can train well now. Because of corona, the sessions are not so long yet and not everyone can go into the weight room, for example. So the days look different. We do not know when the first matches can be played. It is important that we build up condition and team spirit. We can benefit from this later on.

While there’s still a lot of unknowns regarding the upcoming 2021 Canadian Premier League season, the league’s head office recently announced that a full 28 game season would be kicking off in either late June or early July.

With vaccination rates rising coast-to-coast, the CPL is hoping that its single-location start to the campaign can eventually give way to a safe return to home markets, with hopes for fans in the stands as well.

It isn’t known what shape the 2021 Canadian Championship will take, if it does at all, though one imagines Klomp would relish the chance to play against the likes of Toronto FC, CF Montreal, or the Vancouver Whitecaps – especially given his new side’s track record against the latter.

Whatever happens, Cavalry’s much-transformed defensive line sees Klomp arrive alongside new arrivals Tom Field, Karifa Yao, and David Norman Jr, with Mohamed Farsi and Mason Trafford set to be the only only returning defenders from The Island Games.

Klomp certainly isn’t the first Cavalry FC defensive addition to arrive with high aspirations, though it remains to be seen how the Dutch defender adapts to the Canadian style of play and performs at the CPL level. All-told, however, he looks like a solid replacement for Zator – and he’ll have to be if Cavalry FC are seeking silverware this year.