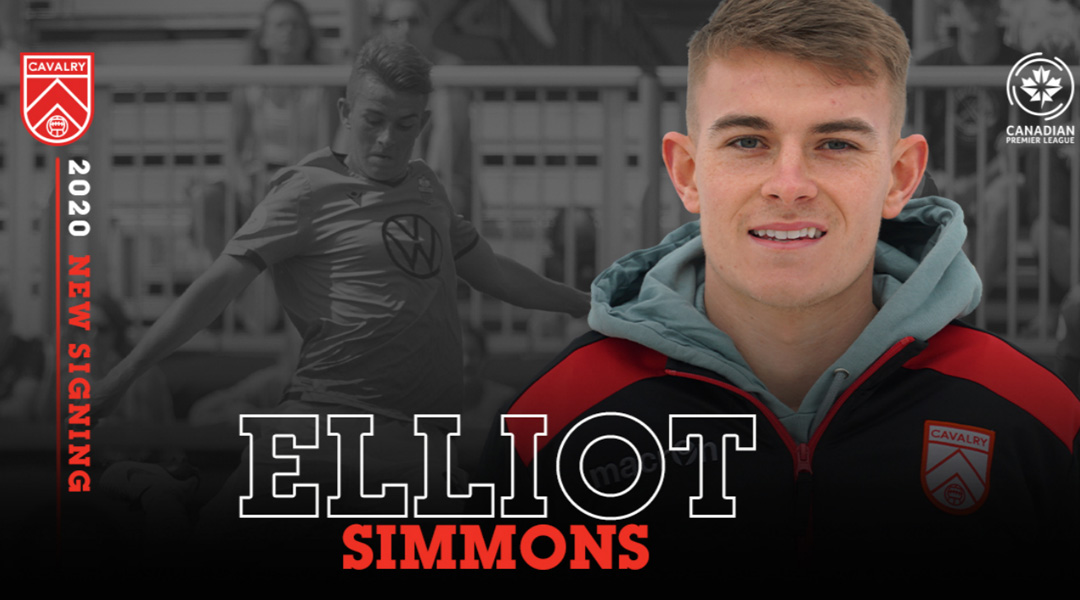 Cavalry FC has confirmed the signing of 22-year-old former Halifax Wanderers defensive midfielder Elliot Simmons, who will join the Alberta-based club for preseason in the near future.

The Luton-born midfielder had spent 2019 with the Halifax Wanderers, where he recorded 17 appearances across the inaugural CPL season. Prior to that, Simmons signed his first professional contract with Swedish side Dalkurd FF in 2017, playing for their U-19 and U-21 teams before moving on loan to Finnish third division side Mikkelin Palloilijat, where he featured regularly in the squad.

Elliot is a player we admired when scouting or playing against HFX Wanderers. He is a great technician that wants to be on the ball and has a very good passing range. We like the fact that he’s still a young domestic player with a big upside as he’s already gained a lot of valuable professional experience. Add that to the fact he knows what this league is all about and it gives him a great head start that will help gel him into our playing system right away.

The 22-year-old domestic talent isn’t the only fairly young player Tommy Wheeldon Jr. has brought in from another CPL side, with Jose Hernandez having become the first-ever intra-league transfer earlier this season. Unlike Hernandez, however, Simmons won’t count towards the club’s required allotment of 1,000 domestic U-21 minutes this season, for which Cavalry FC were one of the slower sides to get to.

The new signing’s youth career saw him return to England after attending a trial camp in Toronto, where he was eventually signed by MK Dons. He spent the next five years developing at the League One side’s academy, then made a jump to La Liga side Malaga before his professional playing career got started in Sweden.


Simmons was one of the first inaugural Halifax Wanderers players to announce his departure from the club following the conclusion of the 2019 season, after the Luton-born midfielder had accumulated 1,042 minutes of action across 17 appearances. His sole assist of the season came in a Canadian Championship match against Valour FC.

Still, Simmons was regarded as a player with plenty of potential at the Halifax Wanderers, so it’ll be interesting to see how many minutes the defensive midfielder can carve for himself in the midst of a Cavalry FC midfield. The club made history when it sold Joel Waterman to the Montreal Impact, who proved himself quite capable when deployed as a defensive midfielder at the CPL level and will leave some big shoes to fill.

Club captain Nik Ledgerwood also plies his trade as a defensive-minded midfielder, but had missed the latter half of the spring season through injury. If such a situation were to arise again, Simmons would be an good selection to replace the club captain in the Cavalry FC midfield. Elijah Adekugbe will also provide healthy competition for the spot.

To that end, the club’s latest signing says he’s excited to continue his development in Calgary:

I played Cavalry a number of times last season and was always impressed with how good and organised they were technically and tactically. I have been developed in a similar philosophy at MK Dons and Dalkurd and [Cavalry FC] felt like the perfect CPL club for me to continue my development. Calgary looks like a beautiful and diverse city and I really look forward to being part of the club and the community.

There had been some inklings that Simmons may have been en route to Atletico Ottawa given his youth career connections to the city, but the defensive midfielder will officially find himself a regular at Spruce Meadows come the 2020 Canadian Premier League season, which now includes a single-season format and a more balanced schedule.


Cavalry FC now has eighteen players registered for the 2020 Canadian Premier League season, with Tommy Wheeldon Jr. having recently brought in Brazilian winger Richard Luca and securing the return of international players Jose Ecalanate and Nathan Mavila. With two players from the CPL-U SPORTS Draft due to fight for a spot in the upcoming preseason training camp, the Cavalry FC squad appears to be nearing completion.

While the club confirmed he was signed for the 2020 season, it remains unclear if there are any club options for 2021. Elliot’s financial compensation were disclosed by Cavalry FC.