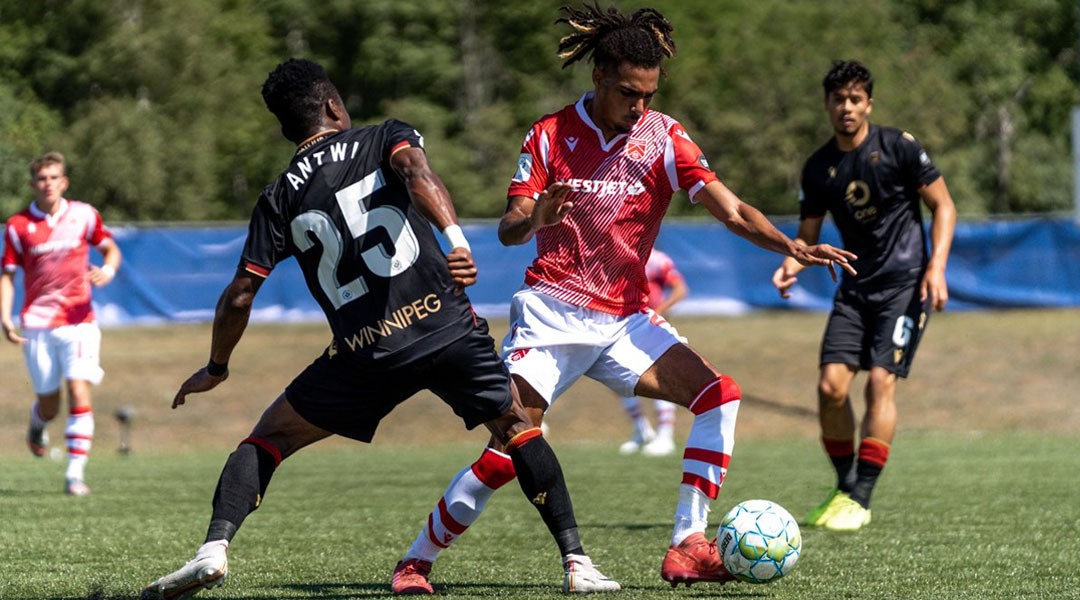 It’s been a big year for Cavalry FC full-back Mohamed Farsi: the 20-year-old Montrealer played his first professional minutes for Cavalry FC, impressing fans and pundits alike with his fast pace, technical ability, and a knack for producing game-changing moments as either a full-back or direct winger.

While Cavalry FC bowed out of the competition in the group stage, Farsi earned both a nomination and a win as the Best U-21 Canadian Player at last night’s official awards ceremony, edging beyond former Wanderer Chrisnovic N’sa and Toronto FC loanee Julian Dunn to claim the beautiful soapstone carving.

The humble athlete said he was a little bit surprised to get the award, which first arrived last week in the mail given that the COVID-19 pandemic made a live in-person award ceremony an unrealistic proposition. For a relative unknown who arrived to trial in Calgary earlier this year after Valour FC passed on giving him a look, it’s been a meteoric rise since.

Farsi says he knew that the Alberta-based side was a good fit before he even boarded a plane:

I was watching the highlights of their games and saw that it is a team that loves to press, go forward, and keep the ball. I said to myself it was the best fit and the best team for me.

After arriving at Spruce Meadows for the club’s preseason camp in March, it took just a week-and-a-half for head coach Tommy Wheeldon Jr. to offer Farsi a contract ahead of former Nine Stripes man Steven Furlano.

Farsi then appeared in every single fixture for Cavalry FC, impressing from the get-go: we hailed him as the club’s best newcomer before he wrapped up a wondrous rookie campaign with one of the best goals of the tournament and, importantly, plenty of consistency behind his highlight reel moments.

When asked by AFTN’s Michael McColl what he needs to do in order keep the momentum going, he says it’s a combination of focusing on the small things while not overthinking the situation:

I think it’s going to be in the details. I have to improve some details. I don’t have to put this pressure on my shoulders, I just have to continue to play my game and tell myself that I had a good last year and, you know, with this bad pressure and bad energy, I just have to enjoy my football and play every day.

The world of professional sports puts a tremendous amount of pressure on young athletes, and Farsi says he first felt that his breakthrough moment was truly in progress after he collected an assist against Valour FC: logging on to social media after the game, his mentions had taken off. The spotlight was on, with Farsi stating that he had to remind himself to keep pushing forward amidst the new pressure on his shoulders.

While he certainly did that in year one, the pressure for a player to follow up strong after a breakout season can be immense: while Terran Campbell was a top golden boot prospect in the inaugural campaign, his time in Charlottetown the following year proved much quieter. Farsi – who’s talent is no longer a surprise – has already identified areas to improve in order to keep his momentum going next year:

I have a lot of things to improve and to change. First of all, my one-on-one: be brave to go forward, and go on-one-on to drive the ball and go one-on-one with the defender, try to beat them with the right side or the left side. This fact is going to the biggest, if I’m able to dribble inside and shoot with the left, or go outside and shoot with the right like my goal, I think that’s going to be best improvement I can do.

While some rumours about a potential overseas move for Farsi sprung up after the bubble tournament, Cavalry FC was able to re-sign the youngster alongside Elliot Simmons and Jose Hernandez. Head coach Tommy Wheeldon Jr. has retained eight members of the 2020 squad so far, while also bringing in former Nine Stripes midfielder Joseph Di Chiara on a multi-year deal.

Over the first two CPL Award Ceremonies, three of the six U-21 Canadian Player of the Year nominations have gone to players from Quebec: Mohamed Farsi (Cavalry FC), Chrisnovic N’sa (Halifax Wanderers), and Diyaeddine Abzi (York9 FC). With la belle province producing so much young talent, it’ll be interesting to see if that trend continues in the years to come.