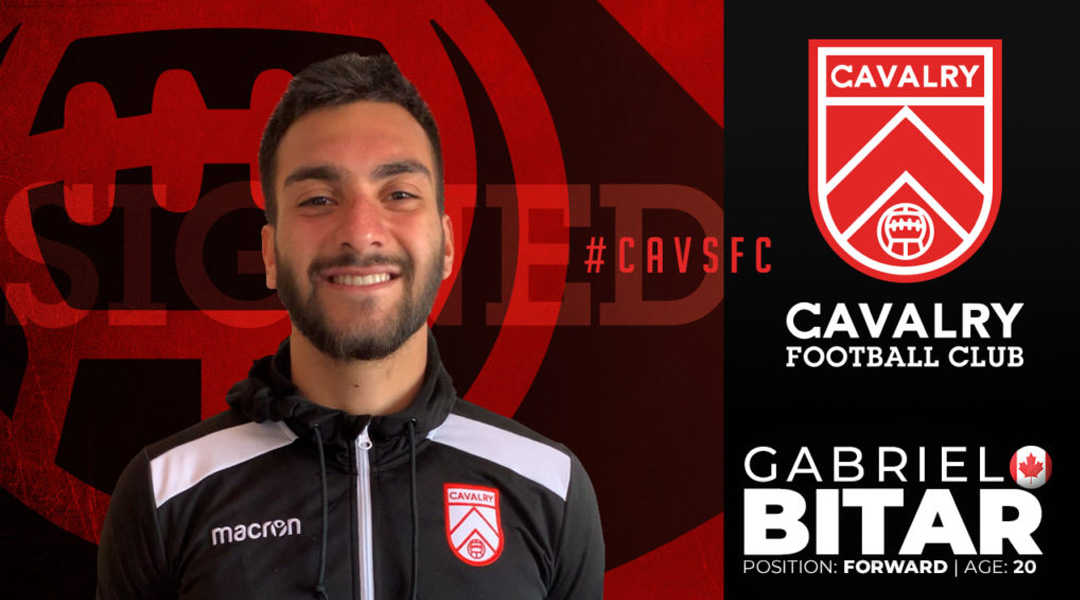 Back in November, Bitar was picked as the top overall pick in the first-ever CPL U-Sports draft after a stellar two years with the Carleton Ravens, where his 2017 rookie season saw him lead the OUA charts in scoring and win the U SPORTS Rookie Of The Year award. He followed this up with 13 goals in his second varsity season before the draft occurred and he was quickly snapped up.

Some 162 days after Cavalry FC head coach Tommy Wheeldon Jr. selected him in the draft, Bitar has now signed his first-ever professional contract. He won’t be the only CPL U-SPORTS draft pick signing so close to the start of the season, with Forge FC’s Jace Kostopoulos expected to sign in a matter of days as well.

Here’s what Cavalry boss Tommy Wheeldon Jr. had to say regarding Bitar:

He’s a forward who fits the way we want to play. We want to be dynamic. Gabriel moves well; he’s a fast-twitch player that plays off the shoulder or drops into pockets well, he’s also a very good goalscorer. Gaby has a spark in him that we like and we look forward to what he can bring to the Cavalry.

Bitar, who is just 20 years of age, is one of several Cavalry FC signings which will help the club achieve its roster requirements for domestic Under-21 players. The Canadian Premier League requires clubs to register 1,000 cumulative minutes from Canadian U-21 players each season, though it isn’t known what penalty would be incurred should any side fail to do so. Even at 20, Bitar is far from the youngest in the squad – local lad Victor Loturi is just 17.

Bitar signed on with a U SPORTS Development Contract, which means his contract will finish as soon as Cavalry FC’s 2019 CPL obligations are complete. The youngster can then return to his arts education at Carleton University, where he’ll still be eligible to play for the Ravens.

The youngster will also be the final signing from Cavalry FC ahead of the club’s first season. CPL sides are only permitted to have 23 players on the books, and Bitar has now filled the final spot. This makes the Alberta-based team the first to have a completely full roster. On the opposite end of the scale, Pacific FC has only made 16 signings, and with one of them on a season-long injury the squad can’t fully fill its own bench just yet.

Cavalry FC will kick off its inaugural season with a home game against York9 FC on May 4. Spruce Meadows is still undergoing expansion, and with many tickets still available it’ll be interesting to see how many fans follow the ‘Ride With Us’ motto of the club when game day arrives.