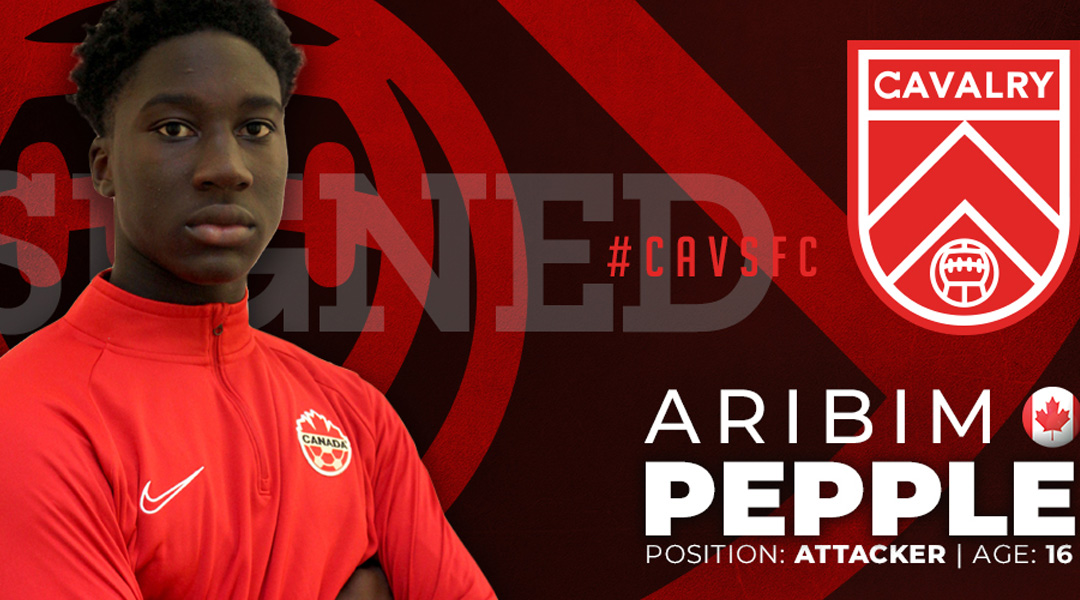 Cavalry FC head coach Tommy Wheeldon Jr. has made his club’s only roster change of the fall season so far, bringing in 16-year-old Aribim Pepple from USL2 club Calgary Foothills. The gaffer had previously referred to the club as a feeder team, and it hasn’t taken long for that philosophy to come into practice.

Pepple finished his time with the Foothills in prolific form, scoring five goals from his last five games.

The Calgary-based Canadian Premier League club has been one of the slowest to give domestic U-21 players minutes on the pitch, so signing the youngster is a logical move for Cavalry FC.

Pepple was born in England, but moved to Calgary at a young age. He’s also a member of the Canada Soccer U-17 national team, which means he took in the Montreal Impact vs Cavalry FC Voyageurs Cup match as a spectator earlier this week.

Aribim is an exciting young attacking player that the Canadian Premier League has been designed for.  His development has accelerated having had a great season with Calgary Foothills USL2 team where he scored 5 goals in the last 5 games of the season.  He will add pace, power and youthful energy to our team.

The Cavalry FC squad has achieved a good level of success in its first few months of action: the club won the spring season of the Canadian Premier League, had a strong start to the fall season, and is still in with a shout for the Canadian Championship semi-finals.

For Pepple, being signed to a professional club has been a life-long dream:

The biggest thing that excites me is being able to finally live out the dream I’ve had all my life, and call myself a professional soccer player. It’s exciting to see all the hard work pay off for not only myself, but my parents who have put an extraordinary amount of effort taking me to practice everyday. Some of my past coaches like Scott [McGeoch], Jay [Wheeldon], and Leon [Hapgood], who have kept believing in me and have provided me with advice and opportunities to play at the next level.

While Cavalry FC had already signed 23 players, the club has room on its roster due to the fact that both Chris Serban and Dean Northover have long-term injuries. Valour FC made a similar signing earlier today when it brought in young defender Yohan Le Bourhis from AS Blainville.

It appears that the youngster will be travelling with the squad to Halifax and may even feature in the squad.