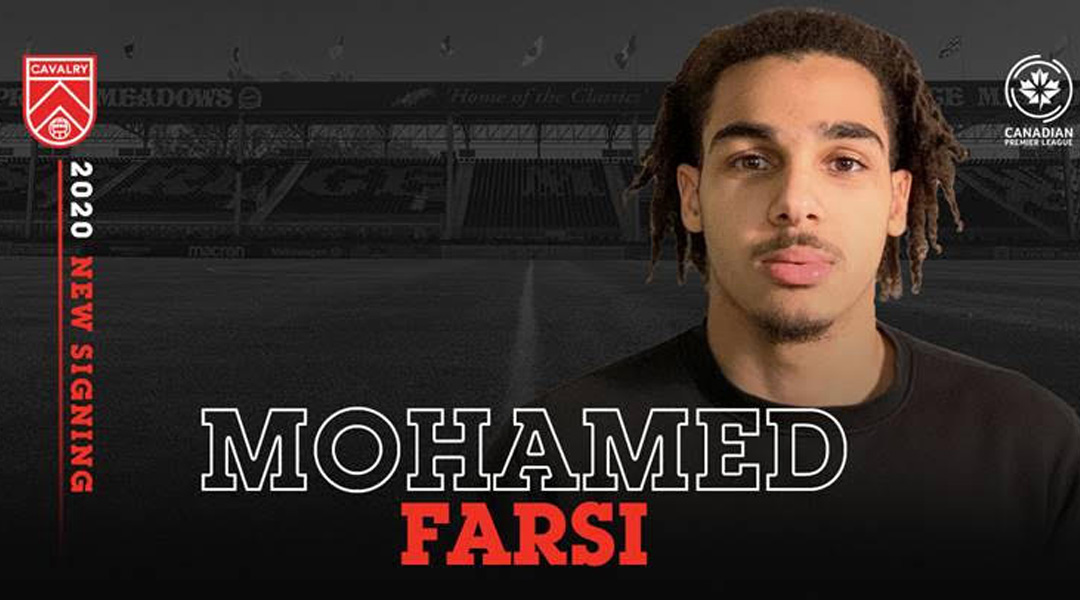 As has long been expected, Cavalry FC has signed Canadian full-back Mohamed Farsi. He had publicly attended Cavalry FC’s preseason training camp which kicked off on March 2nd and was later suspended due to the COVID-19 pandemic.

The 20-year-old Montrealer had impressed during the aforementioned trial that involved a number of unattached players, with Farsi beating former York9 FC full-back Steven Furlano to one of the club’s last remaining roster spots.


Prior to signing on with Cavalry FC, Farsi turned heads as a 14-year-old youngster while playing at Notre-Dame-De-Grace AAA, and began play in the semi-pro PLSQ league when he was just 17.

Last year, Farsi took on Canadian Premier League opposition while playing for PLSQ side AS Blainville during the Canadian Championship, which is where Cavalry FC head coach Tommy Wheeldon Jr. said he first appeared on the Calgary-based side’s radar:

Mohamed is a talented young player that we had eyes on after his performances in last season’s Canadian Championships when he played for AS Blainville versus York9.  He is a modern-day full back that is very technically accomplished, with great pace and jumps into the attack very well.  He is the type of player we were looking at that can come in and make us better and we are looking forward to seeing him develop in our colours.

Farsi, who also has Algerian heritage, states that he had an offer to play in Algeria but opted to fight for a spot with spring and fall season winners Cavalry FC instead. The gamble has now paid off in the form of a contract with Cavalry FC for the 2020 season.


The youngster has appeared for Canada’s national futsal team, recording his most recent appearance for them in February prior to the global sporting pause triggered by the COVID-19 pandemic. Last year the province of Quebec game him the provincial futsal equivalent to the Ballon d’Or for his efforts in the sport.

Having a chance to play with one of the best teams in the CPL. They made history both in their Canadian Championships run and during the regular season games.

Cavalry FC now has 20 players on its roster ahead of the 2020 Canadian Premier League season, which means that at least some of its players from the inaugural season will be released: Dean Northover, Chris Serban, Mauro Eustaquio, Carlos Patino, and youngster Victor Loturi are all without contract, while CPL U-SPORTS Draft Picks Gabriel Bitar and Moe El Gandour are also still contesting for a spot.

Former Calgary Foothills Captain Tofa Fakunle had already left to trial with Valour FC, signalling his presumptive end with the CPL side. Cape Breton University centre-back Euan Bauld and former FC Edmonton winger Abe Dukely had also been trialing for a spot in Tommy Wheeldon Jr.’s roster, though the club has remained quiet on how their trials went.

Prior to Farsi, the club last added defensive depth with the loan acquisition of Toronto FC II defender Robert Boskovic, who plans on solidifying himself as one of the league’s best defenders and put himself in a good position to contest for a starting spot with the MLS side itself.


It’ll be interesting to see who takes up last three roster spots for Cavalry FC, but it’s hard to say that Mohamed Farsi doesn’t seem like a good addition: he’s a 20-year-old who excelled at the PLSQ level in a similar manner that York9 FC’s own Diyaeddine Abzi had done in 2018, and he certainly went on to impress at the CPL level.

Cavalry FC did not reveal details of Fari’s club contract, like its length or his financial compensation.

A Union For CPL Players Has Arrived

Brandon John: ‘Atletico DNA Is Instilled In Our Club’