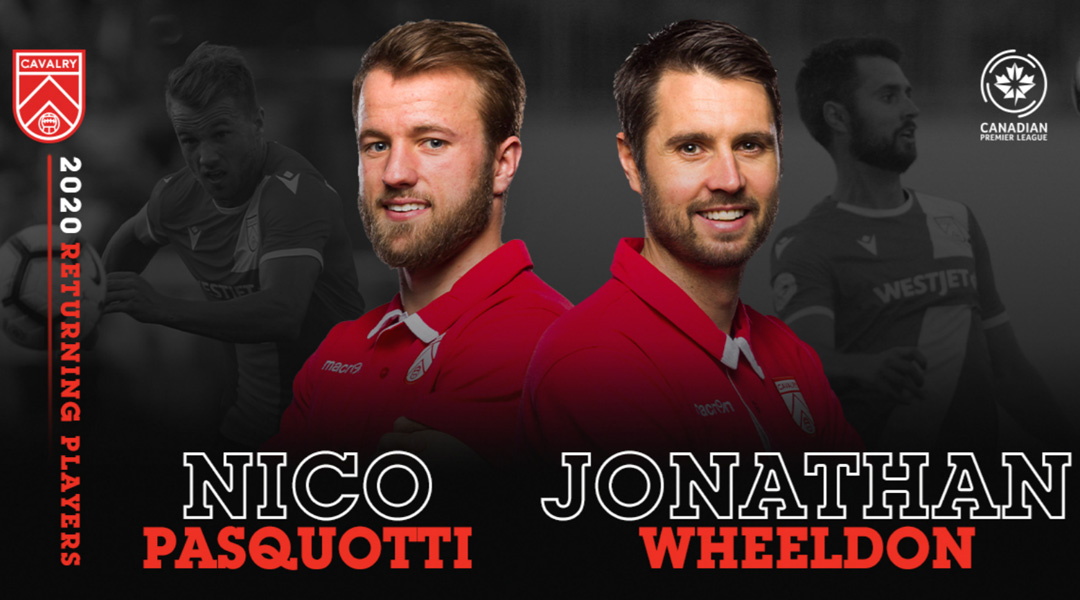 Cavalry FC is bringing back two more members of its core squad for the 2020 Canadian Premier League season in Nico Pasquotti and Jay Wheeldon.

The duo clocked in a cumulative 55 appearances for the spring and fall season champions across all competitions, with both players cementing themselves as crucial cogs in their respective ends of the pitch. With Pasquotti making a name for himself as one of the most dangerous midfielders in the league and Wheeldon proving himself a strong presence in defense, today’s re-signings represent a big piece of Tommy Wheeldon Jr.’s 2020 squad rebuild.


Lethbridge-born Nico Pasquotti has played under Tommy Wheeldon Jr. for several years running, having played for him at the Calgary Foothills since 2016 prior to making the jump to the Canadian Premier League. Pasquotti’s first professional season saw him make 33 appearances for Cavalry FC across all competitions, scoring five goals and contributing no less than seven assists. Known for his explosive runs on the right wing and a powerful long throw, the 24-year-old is one of the more dangerous wingers in the league.

We are excited to have Nico back for another year. He brings with him such great game effect and pride in our colours. Nico is the type that like many of us, feel we have some unfinished business to tend to in 2020 and the work he is putting in in the off-season will show in his performances on the field.

Similarly to Nico, Jay came into Cavalry FC’s inaugural campaign having spent the last several years with the Calgary Foothills following a career in the lower leagues of Europe. As club gaffer Tommy Wheeldon Jr.’s younger brother, the 30-year-old centre-back provided a leadership role within the team, making 22 appearances across all competitions.


Remarkably, Jay Wheeldon has gone undefeated in every single regular season game that he has participated in. Having picked up a knock during Cavalry FC’s 8-0 routing of Valour FC that caused him to miss a chunk of the fall season, it’s expected that the Plymouth-born defender will play an even bigger role in defense alongside the likes of Dominick Zator and Mason Trafford for the Calgary-based club’s 2020 season.

Jay is a valuable part of our squad and our team statistics emphasize that when he’s in the starting eleven. He has such an incredible competitive edge, quality passing range and organizes the team brilliantly around him.

Tommy isn’t done bringing back members of the inaugural season’s roster yet, with the club stating that it is still in discussion with several players to activate their options for the 2020 season. Wheeldon Jr. said he’d like to confirm the status of his returning players before diving in to new signings, evidently hoping to keep as much of his his regular season-winning squad together as possible.

With Joel Waterman having been sold to the Montreal Impact, midfielder Jose Escalante eyeing a return to Honduras this year, and Dominique Malonga rumoured to be on his way out, the well-dressed club gaffer will likely need to bring in some sizable replacements, however.

To that end, Wheeldon Jr. has brought in some new blood through Peruvian forward Jair Cordova, who earned player of the year nominations in Peru’s second division last year. The club also completed the first-ever intra-league transfer by bringing in Jose Hernandez from Pacific FC.

The wages of Nico Pasquotti and Jay Wheeldon were not revealed by Cavalry FC.