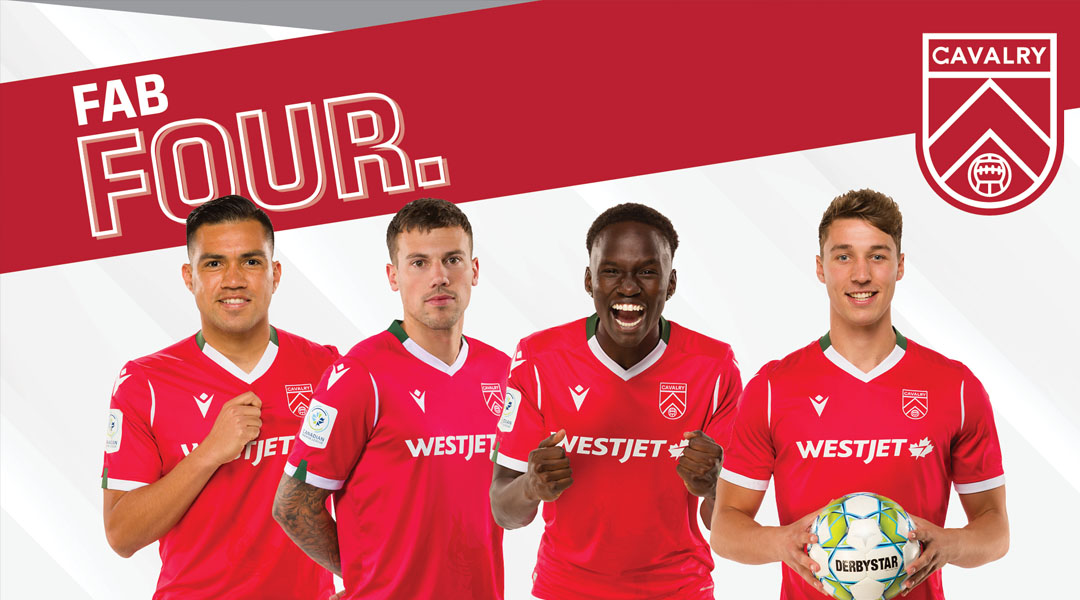 Today saw the Canadian Premier League side sign four returning players to two-year-contracts, each of which includes a club option for 2024.

The Alberta-based side has confirmed that Canadian midfielders Ben Fisk and Victor Loturi will remain with the team, along with Dutch defender Daan Klomp and Honduran attacker Jose Escalante.

“These are very important players in our short and long-term plans,” said head coach Tommy Wheeldon Jr, who later added “we are delighted to secure these players for the long term so we can continue to build something special here.”

Jose Escalante has long been a Canadian Premier League staple, with the Honduran midfielder having made waves for his fast feet and ability to rile up opposition defenses in 2019 – something that he seemed to genuinely enjoy doing.

Travel restrictions prevented his physical return in 2020, with the midfielder staying sharp by undergoing a loan to Club Deportivo Y Social Vida ahead of the 2021 CPL season. He was able to re-enter the country after that, making 28 appearances last season and scoring in the club’s season opener against York United.

Ben Fisk will now get his first multi-year stay at a CPL side after shorter stints with Pacific FC and Atletico Ottawa, with the 28-year-old having proven himself as a worthy midseason addition. His time at Spruce Meadows has been fruitful so far, with the midfielder contributing two goals and five assists through 20 appearances.

Tommy Wheeldon Jr. has a big appreciation for his influence with the Cavalry attack, hoping to supplement the midfielder with some further additions ahead of the 2022 CPL season.

It’s also no surprise to see the club re-sign it’s 2021 CPL season appearance leader Victor Loturi, with the 20-year-old hometown kid suiting up for the club no less than 29 times last season. A versatile option in midfield, we’ve seen him deployed mostly in the middle of the park, though he’s proven capable of dropping back a bit or, at times, pushing up on the right flank.

Loturi’s first steps with Cavalry FC had actually taken place in 2019 as a 17-year-old, though he opted to focus on his studies at Mount Royal University for the next season. After arriving on a U SPORTS deal in 2021 and proving to be an integral part of the squad, he’s now set to be a fully-minted professional for years to come.

“Victor is what this league is all about,” added Tommy, “a local, hungry player that we think very highly of. He has utilized the opportunities created and taken his chance to show how good he is.”

The return of Dutch defender Daan Klomp comes as no surprise, with the centre-back having spent his first season in red as a regular starter at ATCO Field – and one of the top defenders in the league, too. He made 26 appearances across all competitions, with the six-foot-two defender also bagging three goals along the way.

He ended up being a sharp replacement for the outbound Dominick Zator, with his first CPL season even seeing him make the CPL Team of the Year. All-told, that’s not a bad start for a centre-back who has MLS aspirations. On that note, Tommy says he’s attracted a lot of eyes already – which might be why the Alberta-based side has now secured him for years to come.

Cavalry FC has now confirmed thirteen returning players for the 2022 CPL season, eleven of whom were revealed in a previous roster update. The Alberta-based side had also confirmed six departures, with Mo Farsi set for MLS Next Pro and Oliver Minatel poised for an intra-league move.

Tommy had stated earlier that the club was seeing a bit more roster movement than he had hoped for, a revelation which likely preceded the club making sure these four core signings were put on multi-year deals. The financial terms of the contracts were not disclosed by the club.