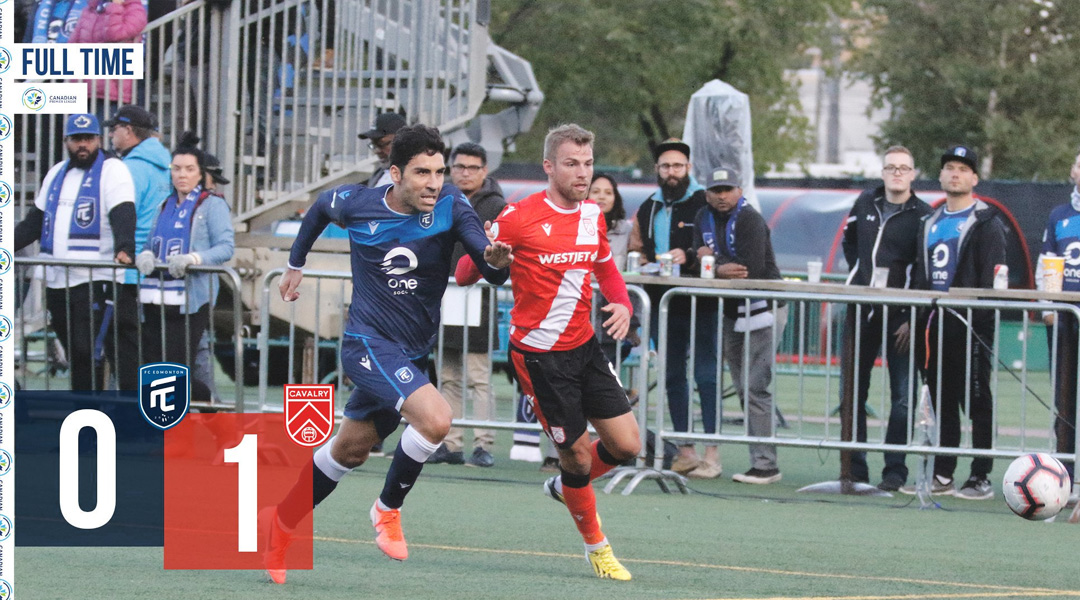 Cavalry FC saw a Nik Ledgerwood spot kick carry the team to a 1-0 win over FC Edmonton in last night’s Al Classico matchup, with the fall season table-toppers having now bested the Eddies on three out of four occasions, with the other one being a nil-nil draw.

The result meant that Cavalry FC won the fan-created Wildrose Cup last night, with FC Edmonton now being mathematically unable to best its local rival in terms of head-to-head records for 2019.


The idea of the Wildrose Cup started in 2016, when two Alberta-based football fans walked into a pub and came up with the idea to try and get the Calgary Foothills and the FC Edmonton Academy to play a regular match against eachother in the spirit of local competition. Both Tommy Wheeldon Jr. (then of the Foothills) and Jeff Paulus (then of the FCE Academy) were on board, with the Foothills eventually playing a mix of FC Edmonton Academy and alumni players in 2018. Fans had already begun calling the event ‘Al Classico’, a tongue-in-cheek reference to Spain’s El Clasico that has evidently caught on.

Both sets of supporters thought the rivalry ought to have some silverware behind it, and so they split the costs of creating a cup evenly, with the idea that whichever Alberta-based club had a better head-to-head record against the other over the season would claim the Wildrose Cup. Tonight, Cavalry FC won the first-ever rendition of the fan-fueled trophy.

The fact that the Eddies lost out last night from a Nik Ledgerwood penalty would have been icing on the cake for Cavalry supporters. Ledgerwood collected fifty appearances for the Eddies after playing for them in 2016-2017, but that didn’t stop the 34-year-old former Canadian international from celebrating in front of the supporter’s section.

It was a frustrating match for the home side, which finished the game having conceding a staggering twenty fouls that eventually led to Eddies minute-leader Jeannot Esua being sent off after frustration got the better of him.


Eddies head coach Jeff Paulus didn’t shy away from criticizing how the red card played out, either:

Listen, the kid that drew it [Jose Escalante] is a good player. But he’s looked for that. He’s stepped in, he’s the one that approached Jeannot, looking that he was probably going to do something to Jeannot. So, Jeannot just stood his ground, puts his chest into him and he drops like he’s been hit with a bazooka and we get a red card out of it. It’s growing stuff for sure for us as a team, we have to have a bit about us that we can just take that and look the other way.

With the final whistle confirming that Cavalry FC has now scored five goals in four Al Classico matches – compared to zero from the Eddies – it’s no small wonder that Tommy Wheeldon Jr. was left smiling as his side collected its first piece of silverware.

It’s important for the fans. What’s great about it is, I was there in the beginning when the fans, tongue in cheek, called it ‘Al Classico’ and then everyone around the country started mocking it, so they kept it. That’s credit to the fandom; that’s how the Voyageurs Cup was created, this is how the Wildrose Cup was created, and it’s the fans that are taking pride in this. That’s who we play for.

The Calgary-based club completed the feat without first choice goalkeeper Marco Carducci, who is returning from his time with the Canadian national team. That meant Niko Giantsopoulos took the reigns between the sticks, with Cavalry FC forced to use goalkeeping coach Jordan Santiago as the backup keeper.

Of course, the Wildrose cup isn’t the only piece of silverware that Cavalry FC can pick up this season: after winning the spring season, Tommy Wheeldon Jr.’s side has secured itself a place in the two-legged Canadian Premier League Championship. The club will play the bout against the fall season winners, and if Cavalry FC claims that too, they’ll play the CPL team with the best overall record across both seasons behind them.


At the moment, it’s looking like the league’s best naturally-developed rivalry – the one between Cavalry FC and Forge FC – is certainly on the cards for the championship, but that’s a story for another day, with another piece of silverware.

Cavalry FC will close out the regular season by hosting the last Al Classico match of the inaugural season on October 19, 2019. With the Eddies having conceded the Wildrose Cup last night, they’ll simply be playing for pride.