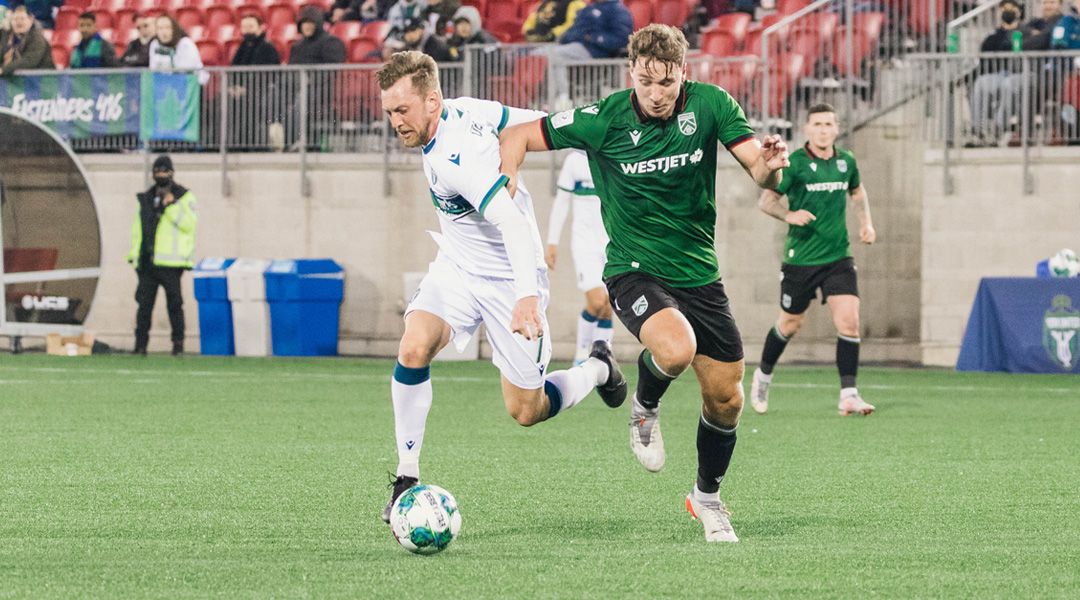 Perennial title contenders Cavalry FC would be the first to admit that the season hasn’t started the way they’d like: three matches in and still without a win, the Alberta-based side fell to a 2-0 loss to York United last night in what we correctly predicted to be a chippy affair.

Of the eight yellow cards handed out by referee Carly Shaw-Maclaren, five of them went to Cavalry. Taking the opening three matches into account, the team has already accrued 13 yellow cards for an average of 4.3 per game – something Tommy Wheeldon Jr. says the club absolutely has to get sorted.

We’ve got to fix that. I don’t like the amount of yellow cards we’re getting: some I think were a little contentious, but others we deserve to have. They’re the ones that come with the reading of the game from our backline, the screening of the game. We play a very aggressive game and we’ve been caught out a bit, hence why our centre-backs are picking them up, but that’s something we can address next week with a bit more work.

The club has a high-pressing mentality that can pay off in dividends when all goes to plan, but last night saw the high line get caught out on several occasions, resulting in defenders forced into fouls. When the back line pushed the ball forwards, it wasn’t long before the ball was right back at them going the other way.

“It feels like we lacked something tonight, so we’ll have to go back to the drawing board to figure out what exactly happened here tonight,” admitted Mason Trafford after the match.

Both Daan Klomp and Jose Escalante have already collected three yellows, which puts them just one card away from a one match suspension through accumulation. 2021 Foot Soldiers Player of the Year Karifa Yao is already on two, and his absence would perhaps be the biggest out of anyone.

If the trend of yellows continue at the same pace, Cavalry will accumulate more yellows in its opening nine matches than FC Edmonton did in the entire 2019 season – though the club obviously intends to crack down on these disciplinary issues. Perhaps equally as worrisome, the team has also conceded a league-high fifty fouls after three matches played, too.

That being said, it’s tough to open up with a three match away stretch: with a home crowd expected to roar at its back next week, we might see a form shift in favour of a club that still has ample time to catch up on points.

Thus far all three weeks of Canadian Premier League action have seen teams come together in brawls, which might be indicative of Canada Soccer refereeing not having a routine grip on the game. It makes for entertaining moments, but it’s a bit shocking to see that become the norm.

For Tommy Wheeldon Jr, the focus now shifts on ensuring the collective are honing in their focus on the next match and keeping their heads helf high:

“I think sometimes you’ve got to take the bad ones as well as the good ones,” said Tommy after the three match road trip. “I said to the lads there, I don’t care how they are when things are going their way, what I care about now is their spirit when it doesn’t. That shows their character, and now we’ve got time to work on it and responce.”

Cavalry’s three-match road trip in Ontario now comes to a close, with the club having a full week to focus ahead of a home opener against reigning champions Pacific FC.