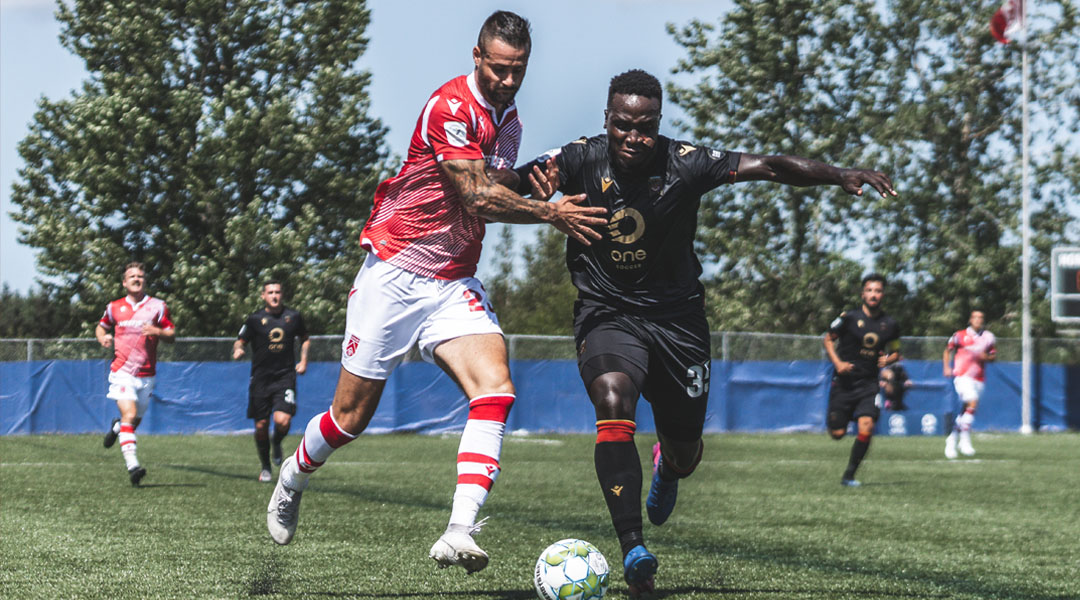 Former Cavalry FC and Pacific FC striker Marcus Haber has confirmed that the next chapter of his playing career won’t take place in Canada.

The 31-year-old striker had a decent Island Games bubble tournament in Charlottetown for Cavalry FC, scoring two goals across nine appearances for the Alberta-based side in his second CPL season.

Haber had scored four goals in fifteen appearances for Pacific FC prior his intra-league transfer this year, with the veteran target man now confirming that he has come to terms with a club outside of Canada:

I do have a move locked in for next season, but it’s overseas. I got a great opportunity that I couldn’t pass up. I won’t be returning to the CPL next season.

Haber’s departure from Cavalry FC was made official yesterday, with the club also confirming that Nathan Mavila, Jair Cordova, Niko Giantsopoulos, and Jordan Brown wouldn’t be returning next year either. While the latter two were already known departures and Cordova’s release comes as no surprise, the departure of Nathan Mavila will be a big miss for the Alberta-based side.

Haber has made over 300 professional club appearances across his career, scoring some 59 goals along the way. His time as a professional athlete started in Canada with the Vancouver Whitecaps, with a young Haber then impressing on trial with West Bromwich Albion. After signing there, the striker spent the next eight years split between England and Scotland, so it wouldn’t be surprising to hear that his overseas opportunity lies back in the United Kingdom.

At six-foot-four, he’s used his big physical presence well to win aerial duals and muscle defenders off the ball. Wheeldon Jr. described him as an old-fashioned target man, with Haber leaving the CPL with a return of six goals in twenty-four appearances.

Cavalry FC has confirmed the return of five members of its core roster so far, with Joseph Di Chiara also expected to arrive. The club’s forward contingent now sees Haber, Cordova, and Brown depart, with youngster Aribim Pepple expected not to return following his Premiership trials. Given that Nico Pasquotti and Oliver Minatel are both recovering from long-term injuries, Tommy Wheeldon Jr. will need to recruit smartly to ensure the club retains its goalscoring edge in its third year.

Marcus Haber did not disclose his next destination, but it’ll certainly be interesting to see where the 31-year-old striker ends up following his time in the Canadian Premier League.