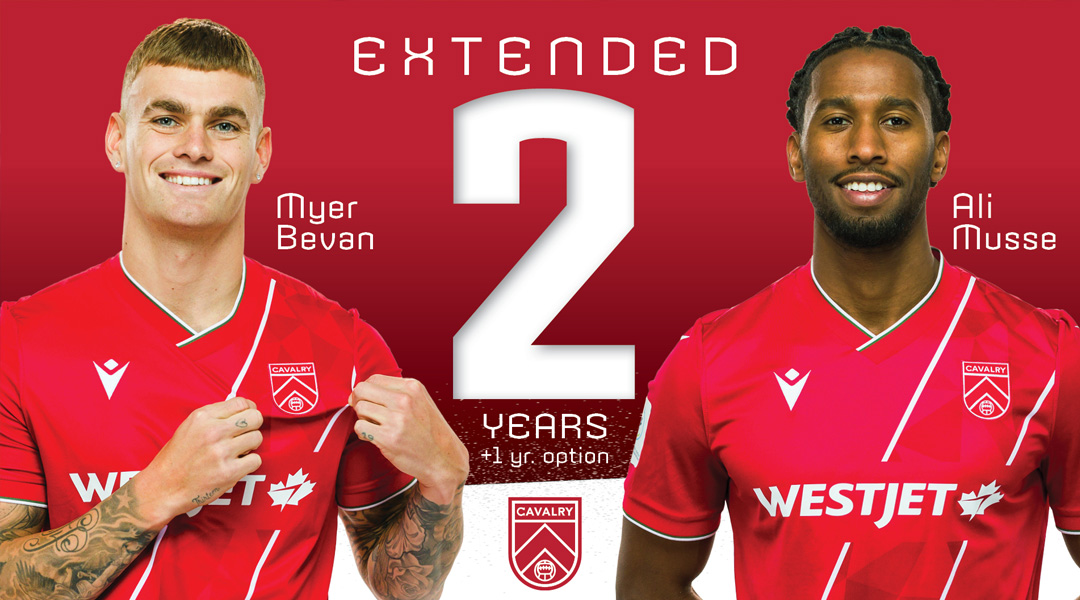 The Alberta-based side has secured the signatures of Ali Musse and Myer Bevan on two-year deals, each with an additional club option for 2025.

The duo combined for thirteen goals across all competitions last year, with Musse tallying three in the club’s first five matches, while his last goal of the campaign locked in the club’s fourth consecutive playoff appearance.

With the former Valour forward also adding four assists in 2022, he’s proven to be a strong domestic option for Tommy Wheeldon Jr, whom he’d previously played under at the Calgary Foothills.

“He’s a maverick, and I think for us, what he brings is something different,” Tommy told CanPL.ca. “He can just catch teams out because he improvises, he’s learning the tactical side of the game, which pleases me because he’s always had that ability to change the game but he also understands his role as a defender.”

The Somalia-born, Winnipeg-raised striker developed in the Whitecaps Academy system, with his first CPL stint seeing him tally two goals and two assists with Valour in the league’s inaugural season.

He then spent a year with German seventh division side FCA Darmstadt before re-uniting with Tommy Wheeldon Jr. back with Cavalry midway through 2021, and now looks to call Spruce Meadows home for the foreseeable future.

New Zealand international Myer Bevan, who holds Canadian citizenship and had been on contract though 2023, now inks a new, longer-term deal after scoring a whopping six goals in fourteen appearances for the team last year.

The former Whitecaps FC 2 player arrived last year as a well-travelled domestic option, having previously played in the US, Sweden, South Africa, and New Zealand.

Bevan’s 2022 campaign opened strongly, with the forward registering five goals in his first nine appearances before being sidelined through injury for most of the campaign.

Three of his early season goals came in the Canadian Championship, where he finished as the tournament’s joint-top goalscorer:

Following his injury, Bevan returned at the end of the season and featured in both playoff matches against Forge, adding himself to the scoresheet in the second leg.

“Both Ali and Myer give us exciting options in our attack,” adds Tomy. “Ali is a terrific dribbler with the ability to produce something spectacular, whilst also willing to initiate our high press and get us on the front foot. Myer is a true goal scorer in that he can score any type of goal, whilst also being a great teammate that works for the team.”

With both attackers now making multi-year arrangements for the club, the Cavalry roster now rests at fourteen players for the 2023 CPL season, so there’s still plenty of room for Tommy Wheeldon Jr. to work with.