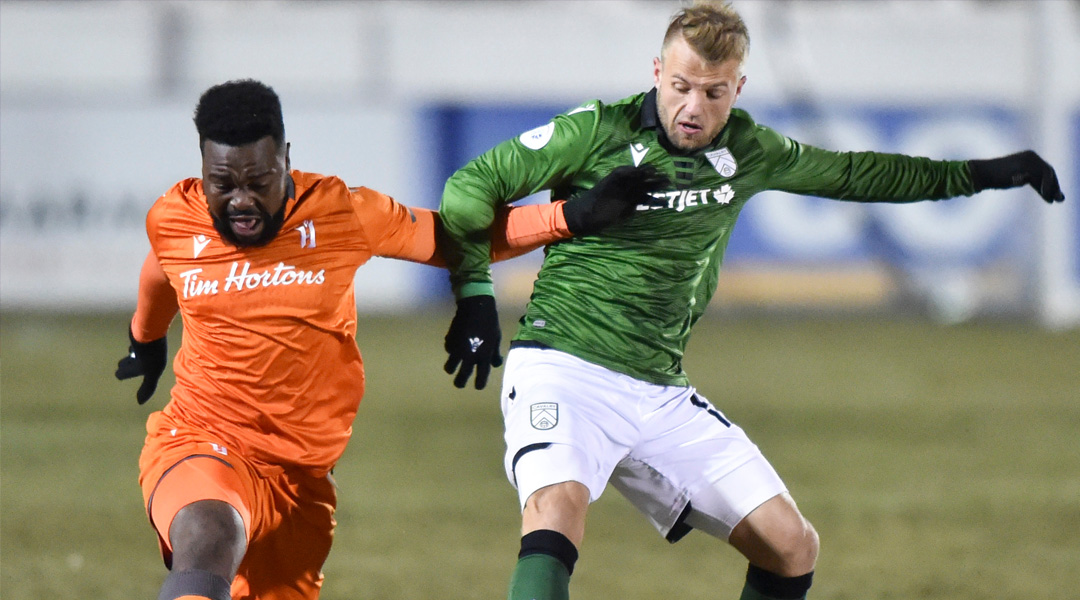 Last night saw a chilly evening at Spruce Meadows play host to an exciting match between Cavalry and Forge, two teams that will spar three more times in the next 23 days: once more in the regular season, and twice in the two-legged Canadian Premier League finals.

Having to play the same team four times in such a short time span presents an unusual conundrum when it comes to what tactics each head coach will deploy, but after witnessing a fiery three-goal game last night, there are a few certainties about the two clubs that fans can take away from last night’s bout:

There’s A Lot Of Parity

It’s a sentiment that has been echoed by players and coaches alike: the Canadian Premier League has a lot of parity in it, though even this feeling couldn’t stop both Cavalry and Forge from accumulating twice the wins of third-placed Valour FC in the fall season.

As much as they excel compared to the other five clubs, the pair of league-leaders seem to be evenly matched when it comes to league action: both sides have won against eachother twice, splitting the points evenly through both an away win and a home win for each. That’s a lot of parity when it comes to league play, with next Wednesday’s Hamilton-based matchup between the two offering a golden opportunity for one team to tip history in their favour.


The Second Leg Of The Finals Will Be Cold

The grounds crew at Spruce Meadows had to do a lot of work to prepare the pitch for football yesterday: they had to clear off a large snow surplus and spent the entire day trying to get the slippery pitch match ready. In the end, the grounds crew couldn’t de-ice one end of the pitch, so the goal line had to be moved forward 10 meters towards midfield, making for a smaller pitch which still fit within FIFA regulations.

With the second leg of the Canadian Premier League Finals due to play out on November 2, the weather in Calgary will have taken an even colder turn by the time Forge FC steps foot in Spruce Meadows once more. With just less than 2,000 fans attending last night’s ‘feels like -11’ fixture, we can only hope the allure of a cup final draws in more fans willing to brave the wintry Calgary weather for a night of Canadian soccer history.


Both Teams Are In The Golden Boot Race

Just a few days after we said not to count Dominique Malonga out of the golden boot race, the 30-year-old Congolese international scored a brace to help his Calgary-based team take all the points against Forge, putting him at eleven goals on the season.

It’s not the first time a late Malonga goal has undone the efforts of the Hamilton-based team, and with Malonga now sitting one goal behind current golden boot leader Tristan Borges, he’s got a great shot at usurping the former SC Heerenveen youngster and winning the first-ever Canadian Premier League golden boot.

Forge’s Tristan Borges – who has scored against every Canadian Premier League club – still leads the race with twelve, while Malonga is tied for second alongside Pacific FC youngster Terran Campbell, who has slowed down of late after an early fall season filled with goals. We’re in for a dramatic finish to the golden boot race.

Whether they’re down to nine men against York9 FC or need a goal in the 96th minute, Cavalry FC always seems to find a way to secure results. Tommy Wheeldon Jr. defined this edge as a result of his club’s culture, and it once again became apparent during last night’s chilly bout: Malonga’s second goal came some six minutes from added time, giving Cavalry a big three points as the side looks to secure the fall season title.

Cavalry FC has only ever lost one league match in which it has scored a goal. If Forge FC hopes to break down the title contenders, it’ll need to keep the likes of Malonga and Pasquotti out of the net, just like it did during its two 1-0 wins over Cavalry throughout the 2019 campaign. In fact, Forge is the only Canadian Premier League club to beat Cavalry more than once, with Pacific FC being the only other CPL team to best the spring season winners at all.

I think it makes for a  neat matchup. We’re both invested in helping the Canadian game. I’m looking forward to it. They’re very good in transition, they’ve got some good exciting attacking players, we’re tough to break down and good in our build up, so it’ll be interesting to see how that meshes.

Suffice to say, it feels like almost anything goes in the matchup between Cavalry FC and Forge FC: in terms of league action, there’s a perfect parity. Each club has scored four goals against the other, claiming the same amount of wins and losses, though only Forge has ever kept clean sheets when the two sides have met.

Next week represents a chance to break the parity, with the following two-legged final poised to seal the difference forever.