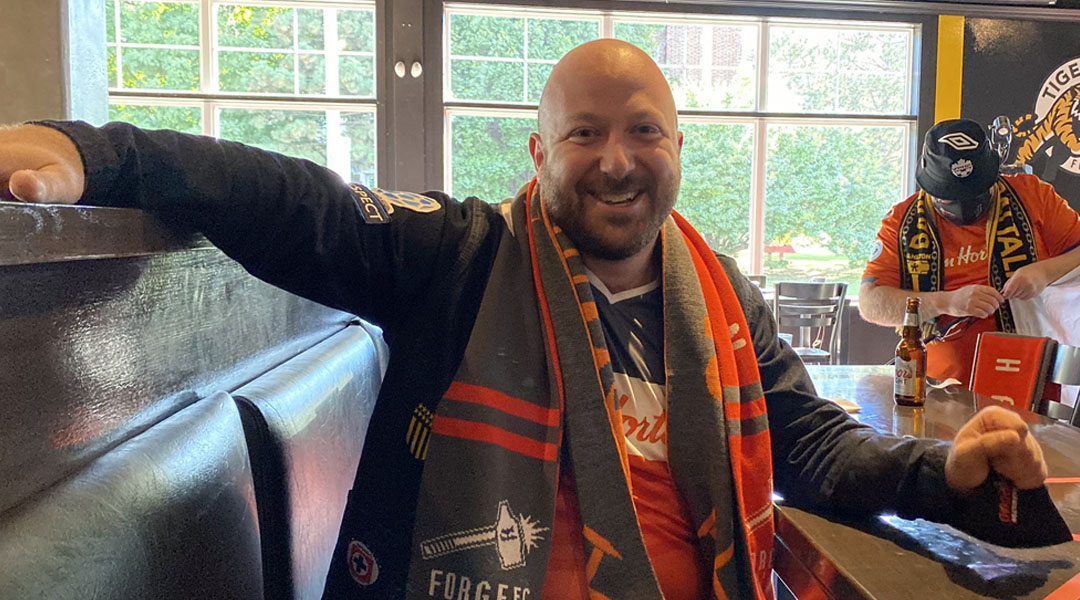 Editor’s Note: As part of showcasing the diversity of footballing talent from across Central America and the Caribbean involved with Canadian soccer, we’re pleased to deliver the third edition of CA & C Cafe, a feature focused on how the rest of our confederation is shaping our game.

In Spring 2017, James Hutton – then the Barton St. Battalion President – described the role of a supporters group as spurring their team onward by cheering and creating an atmosphere which gives the stadium a heartbeat.  Following his passion for the sport, James became Forge’s second hire, and has been instrumental in enabling Hamiltonians passion for Forge Football Club to reverberate across the city and wider region. We were glad to have the opportunity to sit down with James prior to the second Concacaf Champions League leg in Mexico City to reflect on the journey he’s witnessed over the last several years.

The content below has been lightly edited for clarity.

Northern Tribune: “James, in the last three years you have had the unique opportunity to witness the birth and growth of a premier soccer team. Few FIFA clubs get to experience regional play, yet Hamilton’s Forge FC has gone from it’s first game to receiving applause from Hondurans to earning an opportunity to play at Mexico’s sacred football stadium – Estadio Azteca – in three short years. What has it been like for you to watch history in the making? What qualities do you think have driven Forge’s on-field success?”

James Hutton: “It’s been football magic, honestly. In four years Bobby and his team have created this uncompromising standard of greatness…I think proving to international audiences and observers how good we as Canadians are, and how good a team we can be. Unbelievably, every year we’ve achieved something new. Right? We’ve won back to Canadian Premier League Championships, we have gone further and further in international competition and now we’re sitting at this amazing pinnacle of the Scotiabank Champions League, and we’re playing the gold standard of talent in the region, Liga MX’s Cruz Azul…and that’s amazing.

Playing in the Champions League is not something done overnight, but is something they have been able to achieve in a very short amount of time. I think it really comes down to the level of gold standard preparedness – meaning gold standard execution – and being able to have the resources, and the mindset to go out and make these things happen. I am excited that in future years we will have more Canadian Premier League teams in this competition, because I am excited to see other Canadian teams get this opportunity as well.”

Northern Tribune: “CPL Finals 2019: Leg 1. Over 10,000 Forge fans watched as your team took care of business at home in the cool fall air before they headed to Calgary to claim their first North Star Shield. Fast forward to 2022 – and you have 20,000+ Canadian fans who wanted to sit outside for hours in January, enduring subzero temperatures to watch our Men’s National Team play soccer. What effect do you think Forge FC’s success has had on growing support for Canada’s national team, and what effect do you think Canada’s upcoming World Cup appearance will have on Forge FC and grassroots soccer in Hamilton, Brantford and Paris?”
James Hutton: “Yeah, it’s been pretty immense. I think what’s amazing is that it is not just Forge that I think is making a difference on that level, but we are making the pie bigger collectively. We are obviously bringing in new fans that perhaps were not attached to soccer via friends or referrals, but there is also an element of that fact that we are moving people along in their fandom. Maybe someone who watches the FIFA World Cup every four years is coming out now to the odd Forge game. Or maybe someone who is really dedicated to another team is suddenly able to come out and watch their new team every week. So we are making this environment bigger, we are making the ecosystem bigger, and by all accounts people are getting more invested, and that is important as we continue to do that across the Canadian Premier League.

I think from a World Cup perspective we are putting ourselves in a wonderful position. For many generations in Canada this will be their first World Cup [seeing Canada play in Qatar 2022], myself included. We are probably going to score our first World Cup goal, and we could very well get our first World Cup win on the men’s side. So, for me this is all going to happen in November or December before all of Ontario opens for outdoor soccer registration. I am expecting and hoping that kids won’t just get a Canada or Forge soccer jersey for Christmas, but they will get an actual outdoor soccer registration. The idea that right as the World Cup ends, outdoor registration opens if it is not open already, and the numbers are going to go through the roof – we need to make sure we’re keeping everyone’s interest, and make sure that is a wonderful, elevated base we can continue to grow as we go toward 2026.”

Northern Tribune: “In Toronto, finding pitches to play on can be a problem – is that also an issue in the Hamilton area?”

James Hutton: “No no no, not in my opinion anyway, and I think that holds true for Brantford and Paris as well. Do not get me wrong, these pitches are absolutely full on weekends when clubs are running at full capacity. However, if you need a space to play, you can find a space to play…on top of that too a lot of our basketball courts have been refitted to have a small net, it’s effectively a caged soccer field, or a caged basketball court, and that’s happened in the last two years. While that’s pavement and not grass, we are creating more occasions for people to play soccer.

Northern Tribune: “That’s great – courts modified to allow for soccer and basketball are a common feature here in Mexico City.”

Northern Tribune: You’ve spoken previously of age, demographics and geography being some of the dividing lines in Hamilton. However, Hamilton is also one of Canada’s few ‘Sanctuary Cities’, with a history of welcoming Asian, Central American, Eastern European, and Middle Eastern refugees over the decades. To what degree do visible minorities participate in organized and informal soccer in Hamilton, and what is being done to address barriers to their participation?

James Hutton: “Yeah, I think it is really beautiful that Hamilton is one of the six or seven sanctuary cities across Canada, and we get to welcome all these people into our city and they get to create a home here; I think that is really special. To your point, you always want to assure your game is accessible to everybody – from a cost perspective, from a location perspective. Thankfully, one of the programs that was in place from the PanAm Games continues to run – something called Grassroots Soccer Hamilton –  and it’s a free program for kids who live within a certain distance of Tim Hortons Field, and they are a demographic who I think benefits from the existence of recreational programming. So for ten weeks in the summer, five hundred kids descend on Tim Hortons Field once a week for ten weeks. The kids get a ball, a jersey, it is all sponsored and set up and all run by volunteers, and this program has continued to run since the PanAm Games in 2015. While the program is run by a volunteer board, Forge further helps out by ensuring that these kids and their families can see Forge play as well. Being able to continue to expand programs like that, open doors and make sure they have a place to play – the infrastructure to play – it goes a long way into ensuring that soccer is healthy in our communities, but also adds value to the people in our area too.”

Northern Tribune: “Have you noticed in your travels across Hamilton an uptick in people playing casual soccer in parks and other open spaces?”

James Hutton: “I don’t think I have seen an uptick or not, but the big change I have noticed is the number of people who publicly identify themselves as soccer fans. It’s so exciting – I live off Locke Street – every time I go for a run or walk, there is someone in a Forge toque, a Forever First hat, or an orange jersey for game day. That’s been really cool, as that is how you can visually see something is happening.”

Northern Tribune: “Your role at Forge FC’s includes taking charge of Youth Soccer initiatives. You’ve mentioned Grassroots Soccer Hamilton but what are some of the other highlights in your view of Forge FC’s outreach to Hamilton youth, especially first or second generation Canadian youth since the club was founded?”

James Hutton: “The big one for me is being able to cast a wide net and find these spaces where you can make a big impact within the community. While of course we want people to know what Forge is, we want to make people’s lives better in some way. So we worked with the Hamilton soccer board, which oversees all the clubs in Hamilton, Brantford, Paris, and Haldimandand told them that we were going into the local school boards. We will bring our players in Forge gear, and they will get kids excited about being fit – soccer or otherwise. We wanted to be able to ensure that kids are wanting to leave healthy, active lifestyles. That was awesome being able to go into schools and run that kind of programming, and have face time with our players (at least pre-Covid). I think the best part about that program was that at the end of each day the kids were given a goodie bag including a Forge plush ball, an invite to a game, and Hamilton soccer provided us with sign-up info for the nearest club. We continued to drive that program across the City, to ensure that it wasn’t just this angle of being fit, but if soccer was an interest, here is how you can get involved, and we left them with that. For me, we need to continue to drive this type of programming, because obviously it gets us out there, but it also enables us to reach out and touch communities in a very positive way. It goes beyond the day’s activities to build something lasting as well.”

Northern Tribune: “Thank you very much for your time, James.”

Forge FC will aim to make Champions League history tonight as the team undergoes an effort to overturn a 1-0 home loss while away in the fabled Estadio Azteca. Win or lose, the club’s impact on sporting culture and influence seems to be going only one way: up.