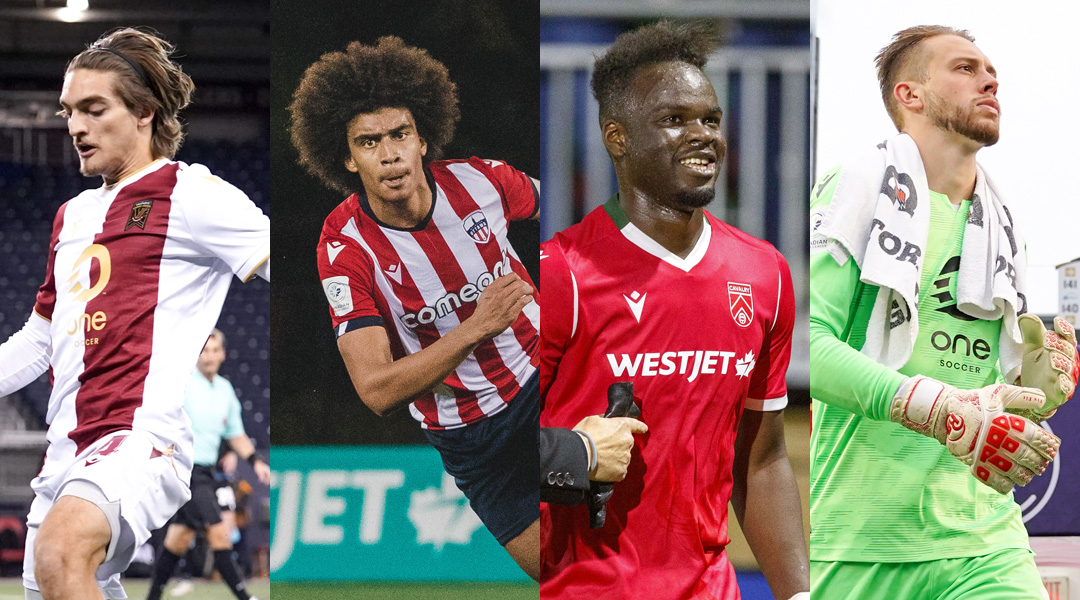 Major League Soccer side CF Montreal has exercised options on all of its Canadian Premier League loanees who saw action this year.

Today, the club released an update confirming that it had exercised club options on Jonathan Sirois, Karifa Yao, Keesean Ferdinand, and Sean Rea.

Here’s a look at how their respective campaigns went:

Valour FC may have missed out on playoffs, but one of the club’s highlights was the red hot form of Jonathan Sirious. The 20-year-old finished the season as a Golden Glove contender, leading the league for clean sheets with nine in 24 CPL appearances. Sirois also leads the league in saves (24) and penalty saves (2), and recorded zero errors leading to a goal. Suffice to say, the Quebecois goalkeeper had a big proving season in Manitoba throughout 2021.

Sirois was also briefly recalled by CF Montreal in August, riding the bench in a scoreless draw against FC Cincinnati. He now returns to the CF Montreal roster, which as of right now only includes one other goalkeeper: former 2020 Valour FC loanee James Pantemis.

Like Sirois, Sean Rea spent a fruitful season with Valour FC, making 25 appearances for the CPL side across all competitions. The 19-year-old scored in both league and cup action throughout his rookie campaign, contributing four assists and appearing just about everywhere in midfield.

With his first professional season now under his belt, it’ll be interesting to see how he fits into Wilfried Nancy’s plans: while one could envision him fighting for some minutes in Montreal, it wouldn’t be surprising to see him get another year of development in the CPL or a similar level next year, either.

Centre-back Karifa Yao made 26 league appearances for Cavalry FC this year, marking his departure with a playoff goal at Spruce Meadows. Having led the Alberta-based side in tackles, duels, and clearances, it’s no surprise to see CF Montreal exercise his option.

While Cavalry’s Tommy Wheeldon Jr. stated he’d love to see Karifa back, the expectation is that he’ll remain with the MLS side next year.

Keesean Ferdinand was the youngest of the bunch to get game time in the CPL, with the 18-year-old making 18 appearances for Atletico Ottawa. He finished the season with six consecutive ninety minute appearances as a centre-back, though he was deployed on the right as needed in the early stages of the season.

While it was a difficult year for Atletico Ottawa, Ferdinand seemed to fit in well at the CPL level. The Ottawa-based team experienced the most defensive pressure out of any CPL side this season, so it was truly a trial by fire for the youngster.

While homegrown talent Tomas Giraldo had been set for a season-long long to FC Edmonton, his loan move was ultimately nixed due to injury struggles. The club has opted not to pick up the contract of the homegrown talent, which means the 18-year-old Canadian youth international might land in the domestic league as a full transfer come 2022.

CF Montreal also released Clement Bayiha, who saw just 395 minutes of action under Wilfried Nancy this season. He had initially signed a homegrown contract in 2018, with the former Ottawa Fury player now officially entering free agency. He’d be an obvious target for CPL sides, particularly one in the nation’s capital.

The most shocking option that was decline is Sebastian Breza, who spent the season on loan from Bologna and fired the club to a 2021 Canadian Championship Final. The 23-year-old won the George Gross Memorial Award in the domestic cup tournament, completing eleven appearances for CF Montreal in all.

While there is an expectation that his loan could be renewed after the expansion draft, if he does truly does depart the side will have two former Valour FC loanees – James Pantemis and Jonathan Sirois – left on the roster.

The club also announced that it was not exercising its options on Mustafa Kizza, Aljaz Struna, Jean-Yves Ballou Taba, and Emanuel Maciel.