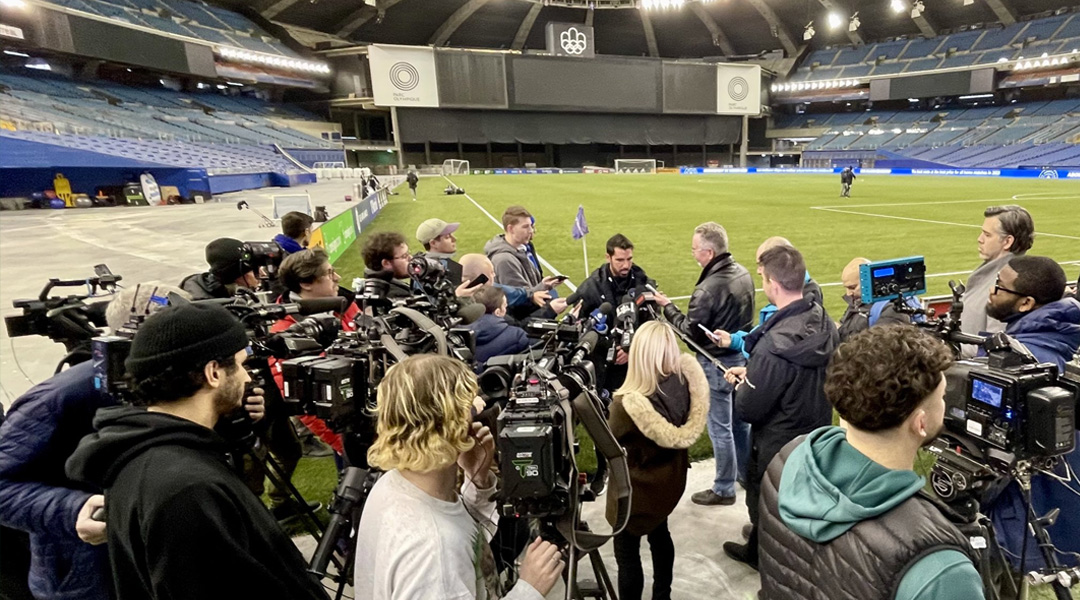 It was the first chance for the media to watch Hernan Losada run a practice and for over two hours the team ran their paces starting with physical training before testing the new synthetic pitch.

It’s a pitch that caused a lot of issues last season through the creation of multiple injuries, but this new FIFA approved field did just the trick and the players were pleased.

There were a couple of notable absences from practice as James Pantemis, Samuel Piette, and Kamal Miller were given an extra week off after representing Canada at the World Cup.

Another player not seen was Kei Kamara, who is still in his native Sierra Leone where he was doing work for his foundation Helping Hands.

After practice, Losada met the media and gave his thoughts on day one of camp.

I am so happy to be here,” said the club’s new head coach. “I missed it a lot and sometimes we don’t realize how privileged we are by doing something that we love and staying together and staying positive and we will try to have another good year.”

He was also grilled about Kamara but apparently mentioned that he was sick and would be back in the next couple of days. A keyword used today was optimism.

Despite losing players like Djordje Mihailovic, Ismael Kone, and Alistair Johnston the team feels like they have the pieces to go and compete for another title.

“I am optimistic because I know the Montreal philosophy and I know this team has a lot of young talent and I like to work with young players so we are able to find the necessary replacements.”

The team will be training at the Olympic Stadium for the next month before heading down south to finish the camp in Miami and open their season on February 25th.

Losada also commented on the return of Victor Wanyama, who last week signed a brand new two-year deal with the club.

“I am extremely happy to have Victor on our team and he is a key player for us and he knows the team and the city and I think the club is happy to have him back.”

Mason Toye also preached optimism in his scrum and was realistic in the fact it was only day one.

“It’s the same mentality for everyone,” Toye said. “We just need to work hard and obviously with a new coach it’s going to be a bit different and everybody is going to try to improve.”

Toye confirmed that the first practice wasn’t too intense and that the team is buzzing to have him and it wouldn’t make sense to go from zero-to-one-hundred on the first day.

Training camp resumes Tuesday morning at 10:30 am at the Olympic Stadium in Montreal.