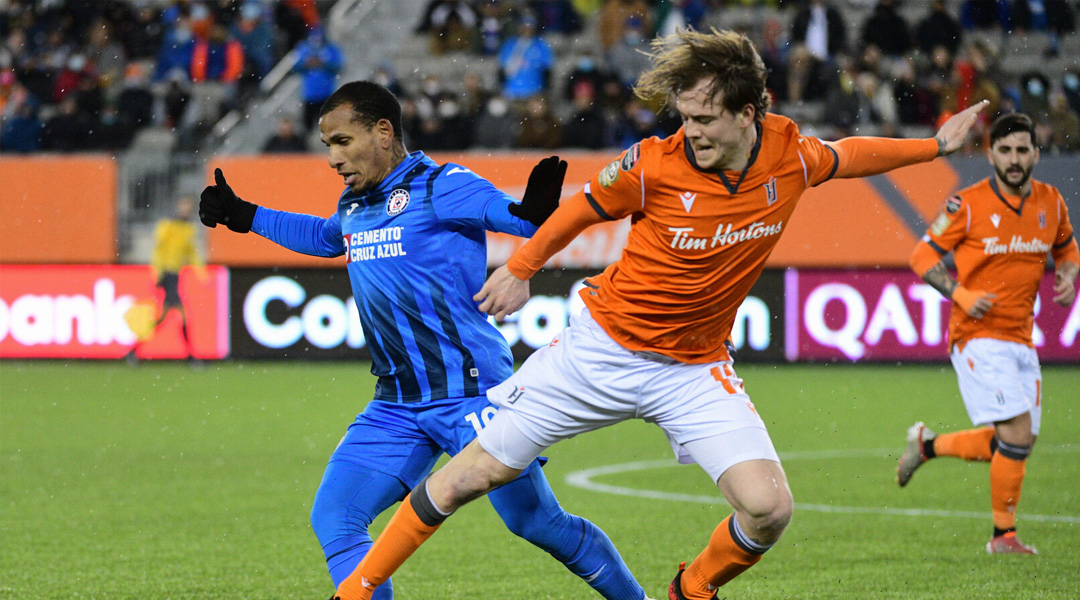 Canadian soccer history was made tonight as Forge FC became the first Canadian Premier League team to ever feature in the Champions League.

The Hamilton-based side fell to a 1-0 home defeat against Liga MX giant Cruz Azul, who entered the match as heavy favourites but found themselves met by a fearless Forge side that, on a different night, might have walked away with a result.

Forge FC now has a lot to do if it’s to launch a comeback during a second leg that will take place at the Estadio Azteca next week. Still, that isn’t to say the result has truly gotten away from the two-time CPL champions.

Forge immediately proved to be a club that wasn’t afraid to take chances against the Liga MX favourites, with Tristan Borges nearly succeeding in an olympico goal just six minutes in. The strong, physical start from Forge did generate a few fouls, though the high-tempo affair seemed to be leaning in their favour.

OH Leuven loanee Tristan Borges came inches away from sending Tim Hortons Field into raptures 23 minutes in, with the midfielder completing a darting run inside the box which resulted in an absolute rocket that flew just north of the crossbar:

Forge were made to pay for their persistent fouls, however, with Alexander Achinioti-Jonsson giving away a long-distance freekick.

Romulo Otero caught Henry off-guard by firing a skidding shot into the far corner: the goalkeeper struggled to pivot direction as the ball bounced across to the far right side, giving the visitors a crucial away goal with their first shot of the game.

It was no surprise to see the physical nature of the game grow after that, with both team captains getting into a row just a few minutes later.

Bekker then saw two chances pass through him, with his first seeing a close-range shot fire high after a stellar run, and the second seeing a fantastic corner from Tristan Borges result in an out-of-the-box effort from the captain which went wide.

The second half saw La Maquina start off strong, earning four corners in a row before the side nearly doubled its lead through a near-post effort from Luis Mendoza.

Forge head coach Bobby Smyrniotis looked to the bench to freshen things up with half an hour to go, bringing on veteran forward Emery Welshman to replace Kwasi Poku on the left flank.

Tristan Henry would come out bravely to keep the match from getting away from the home team in the 79th minute, getting his fingertips on the ball to make a big one-on-one save against Mendoza.

The late stage of the game would then see Alessandro Hojabrpour make his Forge debut, with the former Pacific midfielder having scored a title-winning goal in the stadium just two months prior. Nanco would also make his first appearance of 2022 from the bench at the same time.

The visitors would keep prodding away as the match neared its close, with substitute Uriel Antuna trying a sneaky left-footed effort that found space through four orange-clad athletes before sliding just wide of the far-post.

Bobby would make his final throws of the dice with ten minutes to go, bringing on Woobens Pacius and debut defender Cale Loughrey to replace Terran Campbell and Ashtone Morgan, respectively.

The visitors looked to have broken through for a killing blow eight minutes from time, but Achinioti-Jonsson made a fantastic challenge to kill the play just before it could reach Tristan Henry.

Cruz Azul midfielder Rafael Baca was lucky to escape with a yellow at the tail end of the match, opting to pursue a rugby-style takedown of Woobens Pacius instead of chasing the speedy forward.

At full time, the visitors did enough to secure a 1-0 win – though it was closer than many a spectator likely believed heading into the match.

It’s fair to say that Cruz Azul enjoyed a more comfortable second half, though Forge FC did the Canadian Premier League proud and kept things close in its first leg against one of North America’s top teams.

Cruz Azul – who knocked Toronto FC out of the competition last year – will now host Forge at the world-renowned Estadio Azteca for a second leg on Thursday.

The hammers may have faltered in their Champions League debut, but they can step off the pitch with their heads held high: having gone toe-to-toe with a top Liga MX side, tonight they proved to be a competitive addition to the Champions League from the first minute of play to the last.

The tough result marks the first time Forge FC has lot at home in continental action after four years of play. It remains to be seen if Forge will see its travelling roster bolstered by the return of Omar Browne or Jonathan Grant next week.