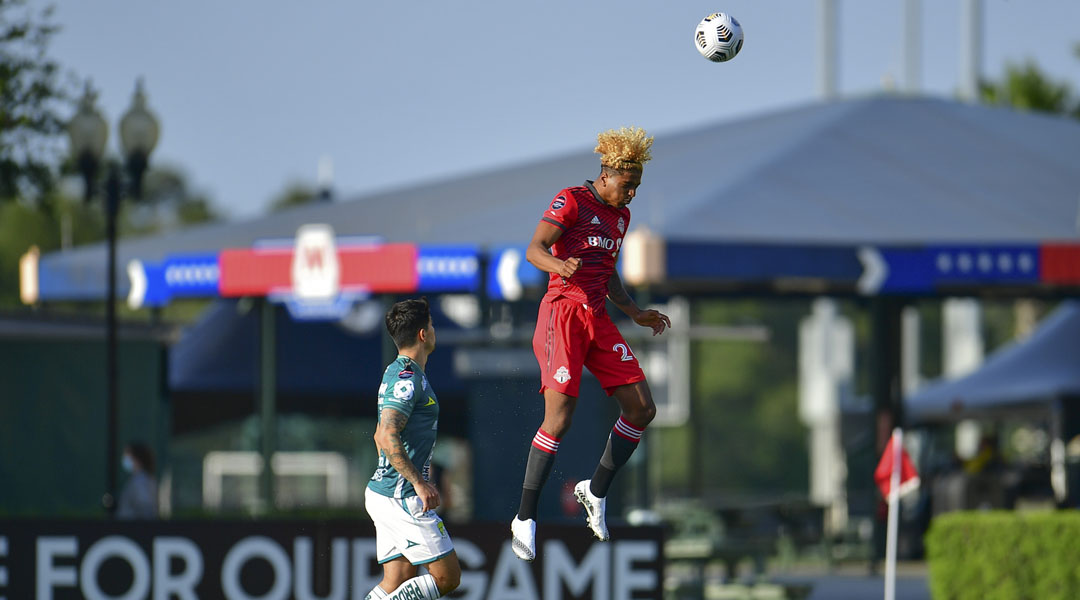 A youthful Toronto FC lineup missing the likes of Alejandro Pozuelo and Jozy Altidore proved itself solid in a composed 2-1 home win against Club Leon tonight, ensuring that the Major League Soccer side’s venture into the 2021 Concacaf Champions League would not end in the Round of 16.

The team had been lucky to come out of Estadio Leon with a draw last week, entering tonight’s match with a slim away goal advantage that the club was able to build on to stave off its Liga MX competition at the ESPN Wide World of Sports Complex.

Some bright note performances from Michael Bradley, Jacob Shaffelburg, Noble Okello, and many of the clubs other youngsters should leave TFC fans hopeful for the upcoming MLS season, too.

Chris Armas had ten absences to contend with in the Toronto FC roster tonight, which led the team to re-sign Luke Singh to another four-day contract so that Armas could piece together a lineup consisting of Bono, Auro Jr, Singh, Gonzalez, and Laryea in defense, with Delgado, Bradley, Priso, Okello, and Shaffelburg in midfield, with Patrick Mullins replacing Jozy Altidore up top.

Absent for Club Leon was former Arsenal man Joel Campbell due to quarantine requirements, though the visitors were able to add captain Luis Montes into the mix after he missed last week’s game due to suspension.

Club Leon, who plied on a lot of pressure late into the game last week, came inches away from opening the scoring in the sixth minute shortly after Laryea had probed on the right, with a low cross from Meneses finding a boot that fired a quick shot just inches wide of net.

Shaffelburg then echoed his strong start from last Wednesday, crossing in a sharp ball that was just out of reach for quick-moving Mark Delgado. The back-and-forth nature of the match then became more established, with Club Leon following up with an in-the-box chance of its own shortly after.

Toronto FC’s best opening chance ultimately fell to Luke Singh in the eleventh minute, with the youngster finding himself unmarked during corner, though he headed the ball wide of the near-post.

Toronto then had a fantastic opportunity shortly after with a smooth run from Delgado creating space in the middle for Okello, who carried the ball and forced Club Leon goalkeeper Rodolfo Cota into a fine save. The ball rebounded back around the box, with a follow up effort from the youngster going high.

The Reds thought they had a clean go-ahead goal after a sharp turn and cross from Bradley, with Noble Okello heading the ball home for his first-ever TFC goal. Immediately, however, the play was incorrectly called back by the assistant referee who mistakenly called for offside after the ball came off of a Club Leon defender.

Bono was called into action in the 36th minute, calmly collecting a clever close-range flick from Víctor Davila, with TFC defenders Auro Jr and Singh doing well to block a succession of shots minutes afterwards.

The match would get a bit chippy near the end of the first half, with Marky Delgado collecting a yellow as the match went into half-time even. Danger would loom early in the second half, with Bono forced into a quick overhead save as Club Leon looked to surprise the home team from the get-go.

Toronto FC then probed on both flanks through Shaffelburg and Laryea, with the latter forcing Cota into a fine save as the full-back found space on the right flank.

Toronto FC would take the lead after a phenomenal nutmeg cross from Shaffelburg found Patrick Mullins in the middle of the box, with the 29-year-old striker firing the ball to give the Reds the lead.

The goalscorer would then find himself replaced by Jordan Perruzza in the sixtieth minute, with Nick DeLeon replacing Jacob Shaffelburg at the same time.

Laryea nearly put TFC two goals ahead after a sharp turn allowed the full-back to turn on the afterburners and rocket into the box, firing a close range effort that Cota was able to palm away.

Shortly after that, Okello’s night came to an end with veteran Justin Morrow stepping onto the pitch. As things stand, both he and Bradley are presently tied as TFC’s all-time competitive appearances leaders with 214 apiece.

Yet another nutmeg assist came into play to unleash Morrow as he ran into the middle of the box, with the veteran being brought down as he reached the ball – though no penalty would need to be called as the ball continued on beyond the line anyway.

Priso would then replace Dorsey as Christ Armas’ final substitution of the night, with blood boiling ten minutes from time as Club Leon secured itself a lifeline by bagging a goal out of thin air and Bono refusing to give up the ball afterwards:

In the final minute of regular time, the Toronto FC bench held its breath as the ball danced across the box, with Bono called into a low save to keep the club’s lead intact.

The Reds were able to hold the line for the final five minutes of added time after that, securing a well-composed win over Club Leon that saw a youthful lineup press in organized fashion under Chris Armas, and a stretched defense that held firm against seasoned Liga MX opposition.

Toronto FC will now move on to face Cruz Azul, who smashed Arcahaie 8-0 yesterday, in the next round of Champions League action.

Before that, Toronto FC will kick off its Major League Soccer season in a match against CF Montreal on April 17 at 2:00PM EST.