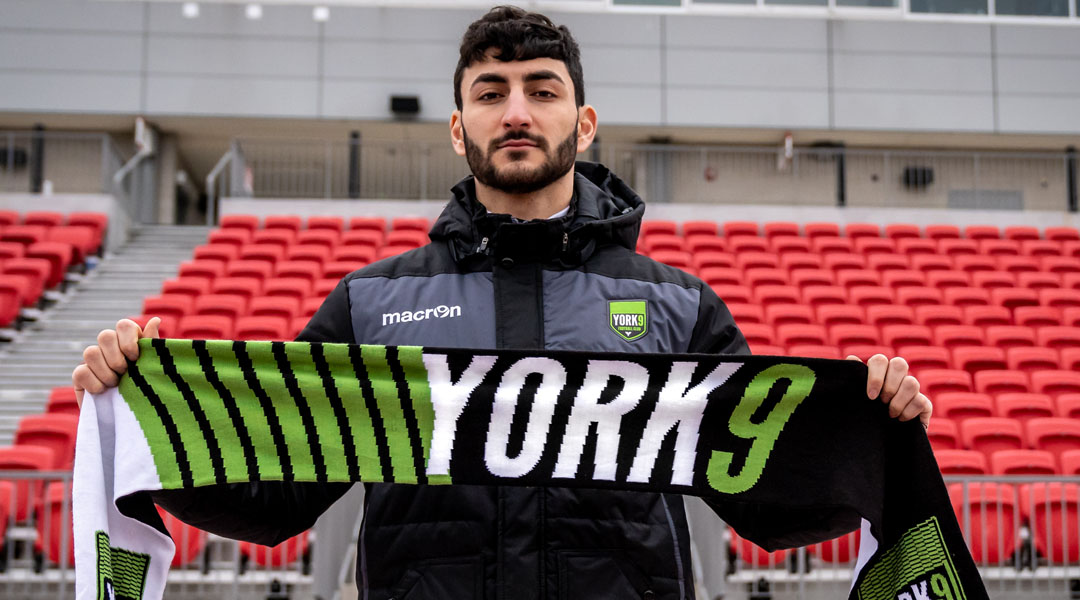 If one looks back fifteen years ago, the shape of Canadian soccer was a very different beast: there were no Major League Soccer teams operating in the country, and while the CSL had yet to go through its massive scandal, many domestic players at the time felt that weren’t any real opportunities to grow as professionals within the country.

In many ways, the career of York9 FC midfielder Chris Mannella reflects the massive growth that Canada has seen since: the 25-year-old got his professional start through the Toronto FC Academy, eventually rising to the top and earning a homegrown player contract alongside now-teammate Manny Aparicio. After departing from the reds, he plied his trade in League1 Ontario for a year before signing for the Ottawa Fury and, two years later, has now joined Canadian Premier League side York9 FC.


The former Canada U-23 has spent his entire sporting career in Canada so far, utilizing multiple pathways to develop his professional career – and that’s not something that would have been a real possibility for the previous generation, who had to venture outside of Canada if they were to flesh out a professional career for themselves.

Oh, it’s absolutely incredible. You speak to some of the older generation and they tell you that they really had no options in Canada to play football, so they go overseas. I’ve been fortunate enough to have my entire career at home, and I’m so grateful for that. It just shows that over the course of even the last five years in itself, the game has grown immensely.

The launch of the Canadian Premier League this year has been a significant game-changer in the domestic professional landscape: with seven brand new teams all looking to recruit domestic talent, there’s more professional opportunities for Canadians to look forward to than ever before.


The first CPL season saw an abundance of Canadian first-year professionals prove themselves in the newfound league, combining with veteran domestic players and talented internationals who pushed them to adapt and grow. While CONCACAF may have played a part in the demise of Mannella’s previous club, he says he’s grateful that the governing body helped create a league which will now give the country’s youngsters more opportunities to play in their own backyard than ever before:

With the CPL now, it gives opportunities to every young Canadian kid to strive to become professional, and it gives them a certain pathway to look up to. I’m just grateful that the CSA and CONCACAF created this league for everyone to get involved with, and it’s something that this country needed for a long time, a first division in Canada. I’m just very happy that it’s become a reality and that every young kid can strive to become a professional and they have something to work for.

Clubs are also required to field a majority-Canadian squad on the pitch, meaning six of the playing eleven must be domestic players. That’s a much higher requirement than what Canadian MLS sides are forced to do – which is something has long-irked the likes of Nathan Ingham – and it’s also a higher standard than what the Canadian Championship enforces, too.

The impact of giving the country’s domestic players ample playing time is clear to see: three Canadian Premier League players have now received call-ups to the national team, and the expectation is that the CPL will be well-represented through several of its U-23 youngsters at the Olympic Qualifiers next year, too.


Nowhere else in the world will young Canadians get such a healthy focus, and that’s likely why there are a few rumours about potential MLS-to-CPL loans for Canadian youngsters. While the league impressed with its quality of play on the pitch this year, several clubs promised big improvements come 2020 in terms of consistency and player pedigree.

To that end, Mannella says he could see other Ottawa Fury members land in the Canadian Premier League to continue their professional careers at home, though he believes that both the USL and even the MLS may pick up some of his former squadmates, too.

I’ve spoken to a few of them, and I can see them potentially moving to the CPL as well. I just wish them all the best and hopefully they come to an agreement that they’re happy with and they find their home. A lot of the players I had the pleasure of playing with over the last two seasons were phenomenal, and I think that any team in the CPL, or even around the USL or potentially the MLS would benefit from having them on their squad.

Whatever happens, a seven-team CPL ensures that are 161 roster spots available in the domestic professional game that didn’t exist before, along with countless other staff roles related to growing the sport in Canada, too. While Clanachan may be late on addressing the subject of expansion, the general consensus is that the Canadian Premier League will pursue such a move in 2021. That’s when Joe Belan targeted an expansion date for his Saskatoon-based CPL venture, while multiple ownership groups in Quebec are expected to be aiming for around then to launch as well.