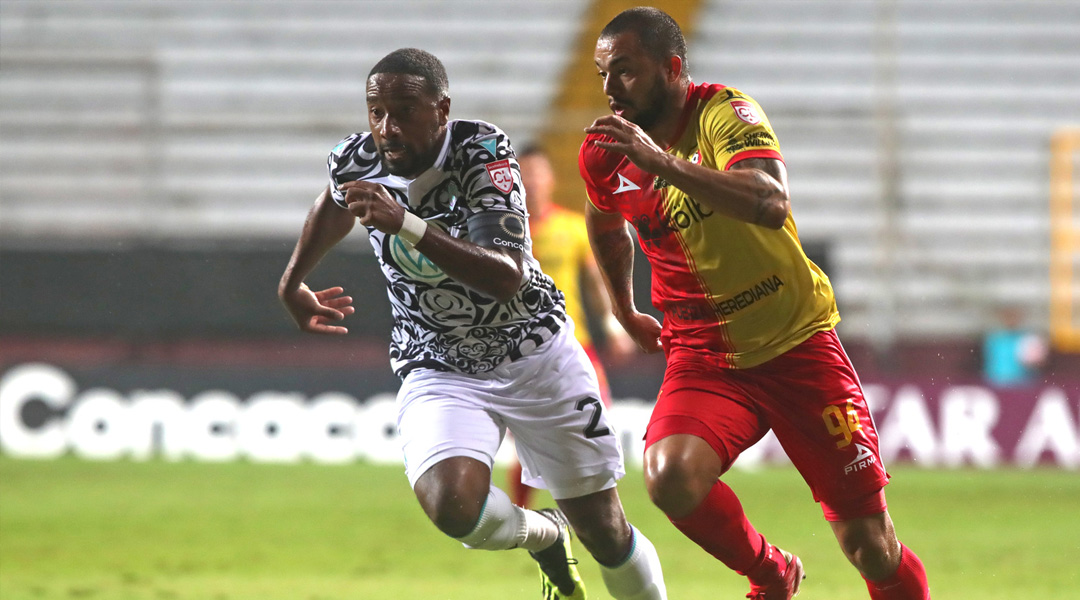 Pacific FC’s first foray into continental action has come to a close in Costa Rica.

The reigning CPL champions can depart with their heads held high after bringing its two-legged tilt against CS Herediano to a penalty shootout, narrowly missing out on a spot in the quarter finals through seven rounds of penalties.

The club entered the night in need of an away goal after falling to a slim 1-0 loss at Starlight Stadium last week, prior to which the club had well and truly trounced Jamaican side Waterhouse FC in the tournament’s opening round.

Top Costa Rican side CS Herediano proved to be a much more polished opponent, with both sides probing the opposition’s defense early on in the first half before tempos faltered. The whistling crowd at Estadio Ricardo Saprissa witnessed two teams who proved difficult to break down, with the hosts losing out on their captain through a first half injury.

The second half would see Pacific FC lose out on their own captain through different means: Jamar Dixon found himself sent off after an errant arm struck Douglas Lopez, with tempers flaring immediately afterwards. As a result, the referee handed the PFC Captain his marching orders just ten minutes into the second half.

Knowing he needed a goal or it was all for naught, Merriman brought on forwards Gianni Dos Santos and Djenairo Daniels as the second half progressed.

The Tridents came inches from their breakthrough goal twenty minutes from time after Gianni Dos Santos sent a well-paved pass through the Herediano box, with Marco Bustos finding himself on the end of it. His on-target strike, however, was well-saved by the keeper.

Bustos nearly played hero once again just three minutes from time, with the fast-footed midfielder somehow slotting through a wave of defenders before firing far-post and being denied by the goalkeeper again.

Things looked destined to be ‘one of those nights’ for Pacific, but it all changed in an instant in the 90th: a long kick from Callum Irving was mishandled by a Herediano defender, and a half-second later Gianni Dos Santos got a boot to a long range effort that soared perfectly beyond the keeper and into the corner!

The last-gasp equalizer paved way for penalties, with both sides unable to secure any further shock moments in added time.

The Tridents took initiative after Thomas Meilleur-Giguere converted the opener, with Herediano slicing wide on their own first kick. Things would finish level after five shooters apiece, however, as Djenairo Daniels had his shot saved.

Things went down to sudden death, and the hosts soon found themselves on the precipice of victory after Amer Didic saw his penalty saved. Up stepped Ariel Soto, who confidently burried his shot to send CS Herediano into the quarter-final stage.

The gut-wrenching loss means that Pacific FC are now eliminated from the tournament, marking closure on their first foray into continental action.

“We’re proud to be a part of it, and I thought we did show our quality against a very, very strong team. Herediano has had success in this tournament, and this is our first experience. We’ve gained a lot of growth, we’ve gained a lot of experience, and for some of our young Canadian players that’s what this league was created for.”

The Canadian Premier League has made a strong case for itself in the tournament, with Forge FC reaching further stages for three consecutive years before landing themselves a spot in the Concacaf Champions League.

The Tridents will have some time to rest and recuperate before resuming their title defence in league play this weekend, with their away trip to Valour FC being supplemented by arrival former Cavalry striker Jordan Brown.