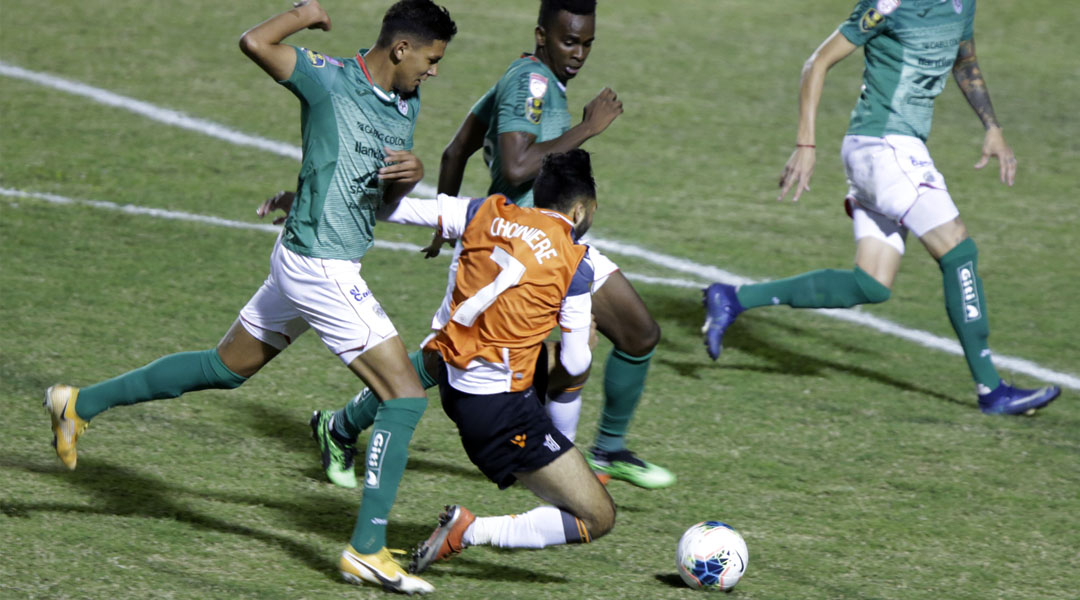 It probably wasn’t how David Edgar imagined closing out the final minutes of career: donning the captain’s armband after Kyle Bekker was sent for an early shower, down one goal in an ill-tempered affair in the middle of crowdless stadium in Honduras as his side missed Champions League action after being denied by the crossbar in a second half which saw nine cards distributed.

While last night’s physical match against Honduran side CD Marathon was ultimately a frustrating experience for the Canadian side, now-retired defender David Edgar was proud of how his team performed in his the final match of his career: they played till the end, and if not for that unfortunate crossbar bounce, might have had a chance at redemption through penalties.

Given how Canadian teams typically fair away from home in Concacaf League action – and the fact that this is only Forge FC’s second year of existence – David Edgar was full of praise for his team during the post-match press conference.

Extremely proud. Listen, you don’t come down to this part of the world and play football a lot of times in your career. I’m proud of the way the boys went out today, and I’m proud to be a part of that. I’m retired, I can say what I want – you’re never going to get protection down here, you’re never going to be looked after. We’ve learned a lesson that hopefully when we come back to play in this part of the world…nothing but pride.

Forge FC came out of the match having edged CD Marathon in terms of possession on the back of an impressive 91% pass success rate, but they ultimately fell to a 1-0 loss that ended with a flurry of cards as emotions boiled over in the second half. For Edgar, it was a frustrating way to end a storied career that saw him impress over in Europe.

We’ve watched them play. All they can do is score from set pieces, and that’s what they did. We switched off. Minor details – Bobby said it yesterday. It’s the details. I just remember them having one chance, and again we weren’t as clinical as we should have been in the final third, but I was proud of the boys.

After going a goal down in the eighteenth minute, Forge FC showed signs of stirring back even before an ill-tempered second half saw seven yellow cards and two reds handed one, the latter of which both went to Forge men: team captain Kyle Bekker for a dangerous tackle, and head coach Bobby Symrniotis for what is assumed to be dissent.

When asked what caused emotions to boil over and what ultimately got Smyrniotis sent off, assistant coach Peter Reynders (who took over for Bobby in the post-match interview) answered the first half the question:

It was a difference between physical and more technical, that’s how I see it. I think we played a very good game, a high-intensity game with a lot of duels, but I think we had our chances. Unfortunately, one moment that we were maybe a little bit less focused… but that was it. Is that experience? I don’t know.

Forge FC exits the competition after dispatching both Municipal Limeno and tough side Tauro FC to reach the quarter-finals, where last week saw a somewhat sloppy match ultimately end in a penalty shootout defeat for Forge FC. During their inaugural run last year, the club made it to the round of 16, ultimately impressing spectators and pundits alike with how the Canadian newcomers performed in continental action.

Having won the 2020 Canadian Premier League season, the hammers will be back next year for the 2021 Concacaf League, and Reynders is hoping that the experiences they have endured over the last eighty days will be a positive influence.

We have to deal with the way of playing in this area of the world. We will take it with us. I think again today we had our chances; we had our chances last week, now again, against a tough team, a physical team. That’s a thing we have to improve and deal with, and we will. And we will come back and then we will have success, that’s for sure.

While Reynders laid the factors behind tough Concacaf League away defeats down to playing physical, tough opponents, Edgar had other thoughts when asked if he felt frustrations boiled over due to ‘uneven hands’ from the referee:

You saying there’s cheating? Because yes. I’m sorry, I’ve held my tongue for fourteen years playing down in this part of the world, and that’s what it feels like at times, whether we’re naïve or nice as Canadians, but we’re going to have to get used to it. These boys have learned a lesson because nothing is given to you out here. It went exactly as I expected it would go, no surprises. I’m proud of the way the boys handled it, stuck up for themselves, got stuck in, and it was a good ol’ fashioned ding-dong.

The 33-year-old veteran hung up his boots for the last time following last night’s match, with the former Canadian international revealing last week that he was retiring in order to fully commit to his coaching career. He departs the Hamilton-based team after making 28 appearances, having clearly left a positive imprint on the team.

Given that the veteran defender has played for the likes of Newcastle United, Burnley FC, Swansea City, Birmingham City, and Sheffield United prior to his return to North America, it’s no surprise that his experience has rubbed off on the two-time CPL champions. He’ll leave big shoes to fill.

As for how he believes they can improve in the years to come, he echoes the sentiment of Wanderers head coach Stephen Hart: you just can’t coach experience, so he wants them to soak up everything has happened during their four matches over the last eighty days:

I just think the boys need to learn from this, and want it, and crave playing down here and crave playing these big competitions. This is what football is all about. I got to end it on a competitive, as you say, an old fashioned kickabout in the park there. They’ve just got to learn from this, and these boys, hopefully I can help them in the years to come and any other CPL team that’s lucky enough to come down. What we showed today, hopefully everyone at home, everyone in Canada, and everyone in the CPL is proud of this group because we’re representing that league and this country and those boys in there should be proud.

With the curtain now closed on Forge FC’s season, Smyrniotis will now switch focus to locking down his roster for the upcoming year. He told us that the club was in the advanced planning stage for such, and it’s no secret that he’ll need a squad with lots of talented depth: the Hamilton-based side still finds itself in at least three competitions next year between the 2021 Canadian Premier League, the 2021 Concacaf League, and the belated 2020 Voyageurs Cup Final against Toronto FC.