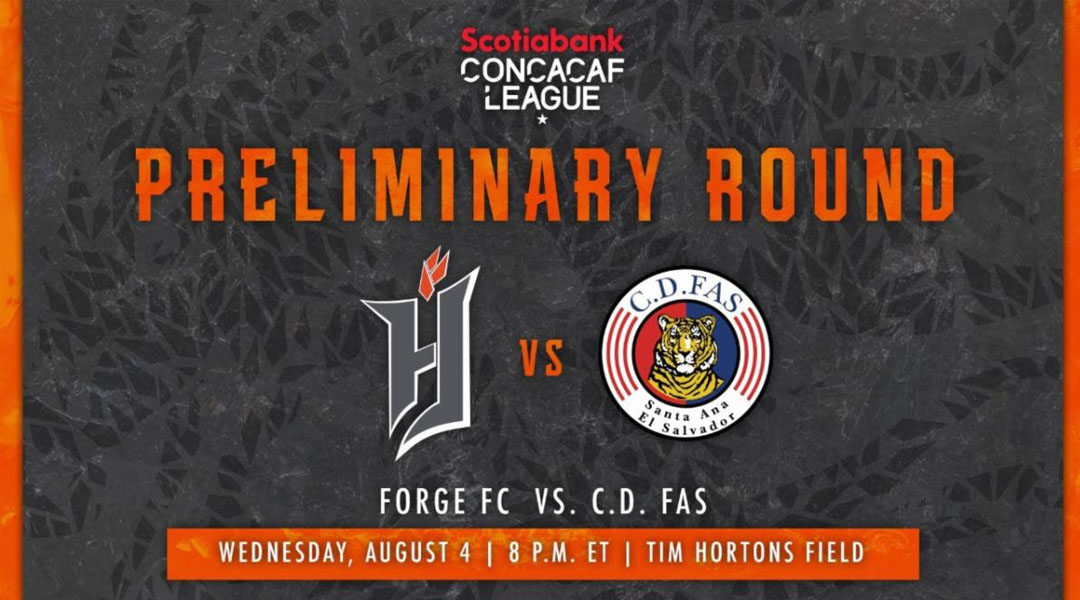 Forge FC has locked in its dates for the primary round of the 2021 Concacaf League, which will see the Hamilton-based side play both home and away fixtures against Salvadoran side CD FAS.

The preliminary round will see Forge play host first, with the match at Tim Hortons Field set for Wednesday, August 4 at 8:00PM EST. Since that’s just about a week and a half after the conclusion of the bubbled start to the 2021 CPL season, it’s possible that the fixture could be Forge FC’s first home match in 608 days.

With Ontario currently set to enter stage two next week (and hopefully stage three by then), the club is currently only able to guarantee tickets to the match to season ticket holders – but sales may open up further in the near future.

It is an honour for Forge FC to represent Hamilton as the CPL Champions in Concacaf League for the third consecutive season. We’re very proud of our accomplishments in our first two appearances and look forward to competing against these quality clubs in Concacaf League again in 2021.

The club is then set for an away leg in El Salvador set for Tuesday, August 17, with the winner of the two-legged affair advancing to take on Panamanian top flight side Independiente in the Round of 16 in September.

The previous two seasons saw the reigning Canadian Premier League champions exceed expectations, reaching the Round of 16 in 2019 and the quarter-finals in 2020.

While the club’s track record for the preliminary round is evidently good, CD FAS are expected to provide formidable opposition: the top flight Salvadoran side has won domestic honours no less than 18 times. In a small bit of ‘it’s a small world’ coincidences, the Salvadoran side is also where former Halifax Wanderers striker Luis Alberto Perea ended up in 2020.

After coming one match away from securing Champions League action last year, the hammers have reinforced their lineup with some great-looking additions: 2019 CPL MVP Tristan Borges is back on loan, with Concacaf League veteran Omar Browne and Costa Rican attacker Joshua Navarro also set for loan spells with the side.

The club has also brought in five additional domestic signings, including a trio from the Sigma FC pipeline. While defensive anchor David Edgar is now an assistant coach with the side, the club has replaced him with MLS veteran Dejan Jakovic.

Prior to the opening round of Concacaf League action, Forge FC will see out the first eight matches of their CPL title defense in a bubbled format in Winnipeg, with the first match of the bunch set for this Sunday against Valour.