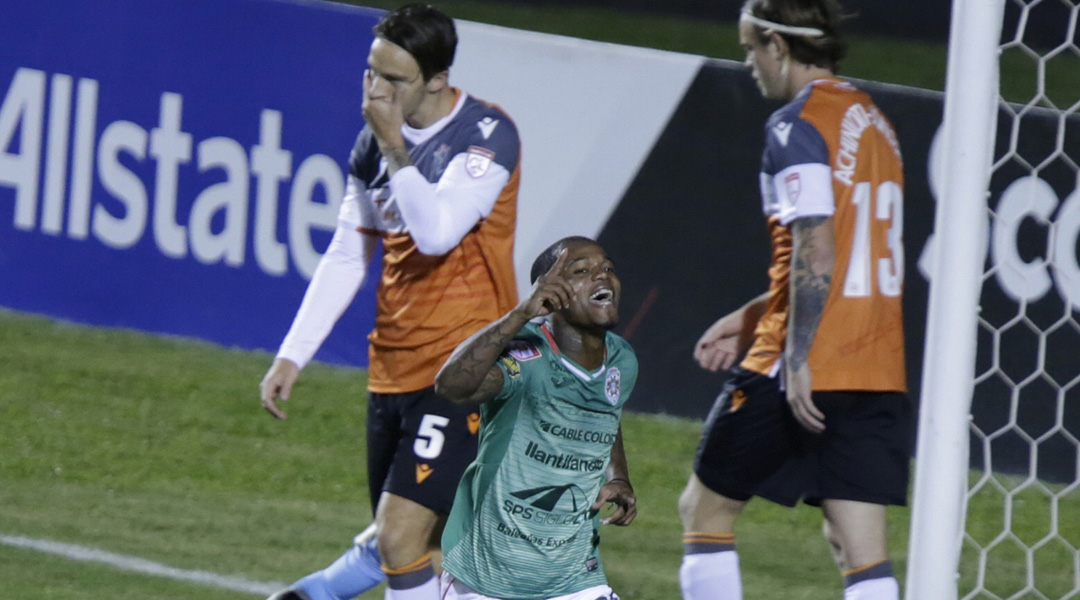 The final match a Canadian Premier League side will see this year played out tonight in Estadio Tiburcio Carias Andino, with Forge FC sinking to a 1-0 defeat against Honduran side CD Marathon in a Champions League play-in match which saw red cards handed out to Kyle Bekker and Bobby Smyrniotis in the game’s dying minutes.

The result means that reigning Canadian Premier League champions Forge FC have narrowly missed qualification to the Champions League after its quarter-final defeat against Haitian opponents Arcahaie FC last week, though the side exits the continental tournament with their heads held high after the 2020 season saw them win their domestic league and qualify for next year’s Concacaf League tournament. Still, the result will be a frustrating one for the club and Canadian football fans alike.

Forge FC head coach Bobby Smyrniotis made two changes to the side which fumbled against Arcahaie FC, with Maxim Tissot replacing Paolo Sabak and Kadell Thomas starting up front, with Jonathan Grant moving to right back in replacement of Dominic Samuel. Tonight’s lineup featured a front three of Kadell Thomas, Molham Babouli, and David Choiniere, with Maxim Tissot, Alexander Achinioti-Jonsson, and Kyle Bekker in the middle. The back four consisted of Kwame Awuah, Daniel Krutzen, David Edgar (in his final match), and Jonathan Grant lining up in front of CPL Golden Glove winner Triston Henry.

It didn’t take long for CD Marathon to inject a spark of magic into the match, with a corner kick set piece nearly resulting in an Olympico. Following Henry’s gaff against Arcahaie FC last week, it would’ve been a nightmare start for the away team – but this time, the 27-year-old was alert to the danger.

Six minutes later, the hammers nearly struck on a quick counter attack with a lofted ball into the box finding its way to Kadell Thomas, who found his volleyed effort cleared just in front of the line by the last man back.

The eleventh minute saw CD Marathon apply pressure on a corner, with Techera Pizzarro jumping just underneath the lofted ball. Two minutes later, Henry was called into action once again when Kervin Arriaga fired a low shot that the goalkeeper proved equal to.

The pressure from their Honduran opponents paid off for them on the twenty minute mark following another set piece, with Henry making a fantastic save from a short-range header before the ball fell to midfielder Edwin Solano. He wasted no time redirecting the ball into the back of the Forge net:

The game became more physical as Forge FC tried to hit back between bouts of pressure from CD Marathon, with perhaps the best chance coming in the forty-first minute: Kadell Thomas whiffed a volley in the box before setting up Tissot, who then fired a half-chance well wide of target.

Both sides came together when emotions boiled over following a set piece two minutes later, with a testy first half ultimately coming to a close without any yellow cards being issued. The second half, however, would take a different route.

Half time saw Bobby Smyrniotis bring on Chris Nanco to replace Kadell Thomas, with the Forge FC gaffer hoping to inject some fresh creativity to the Forge attack.

The hammers started off the second half by missing an equalizer by mere inches, with former Toronto FC striker Molham Babouli firing high close to the net but seeing his effort bounce off the underside of the crossbar without crossing the line.

Moments later, Babouli found himself with space on the right flank once more, with his sharp-angled shot being gobbled up by young Marathon goalkeeper Luis Ortiz.

Edwin Solano was evidently still hungry after putting his name on the scoresheet, with the midfielder dancing throughout the box beyond multiple Forge FC defenders before taking on too much with his dribble, allowing Forge to clear their lines in the fifty-third minute.

An absolute touch of magic by Kervin Arriaga five minutes later gave him yards of space between him and the last man back, but the CD Marathon striker fired his shot into the side netting.

Edgar found himself in an altercation with a CD Marathon player in the sixty-third minute, with the latter finding himself on the floor after the duo clashed against eachother. As a result, the 33-year-old collected a yellow in his final professional match.

The cards didn’t end there, with Chris Nanco clearly clipping the heels of Arriaga moments later as the striker moved to play the ball behind him, with CD Marathon’s Luis Garrido and Luis Vega both being penalized for tactical fouls moments later.

David Choiniere went for another one of his dazzling Concacaf League runs in the seventieth minute, with the Quebec-born midfielder being brought down by Luis Vega to earn a freekick for Forge FC. Unfortunately for the hammers, the resulting freekick from Krutzen deflected and went just wide of the net.

With time winding down, yellow-carded substitute Chris Nanco found himself being replaced by Anthony Novak as Smyrniotis searched to claw a goal back with a new attacking presence. He would soon by joined by more fresh legs as Jordna Dunstan and Paolo Sabak came on the pitch.

Forge FC built up attacking momentum with these changes, but it was CD Marathon who missed the best chance moments later when a counter-attack caught out the Forge FC back line. If not for a last-gasp block by Maxim Tissot, the scoreline could have been done and dusted in the eighty-second minute.

Frustration got to Forge FC captain Kyle Bekker, with the CPL MVP collecting a straight red card in the eighty-fifth minute after a dangerous tackle. With the team captain taking an early shower, Edgar got to don the captain’s armband in his final career match – though not in the way he might have hoped.

Things went from bad to worse as Forge FC head coach Bobby Smyrniotis got a red card himself, with the gaffer being sent off the sideline in added time as three more yellows came out around the pitch to conclude an emotional finish for both teams.

Forge FC proved unable to find the equalizer, ending its Concacaf League campaign on a frustrating note with a 1-0 loss to the Honduran hosts.

The result means that Forge FC bows out of the 2020 Concacaf League without qualifying for the Champions League, though the club still represented Canada well in the continental competition: as the lowest-ranked seed in the tournament, the club fought beyond Municipal Limeno and Tauro FC to reach the quarter-finals in just their second year of existence.

Forge FC’s 2020 season may have officially concluded without paving way to the Champions League, but the Hamilton-based side still finds itself in at least three competitions next year: The 2021 Canadian Premier League, the 2021 Concacaf League, and the belated 2020 Voyageurs Cup Final against Toronto FC.