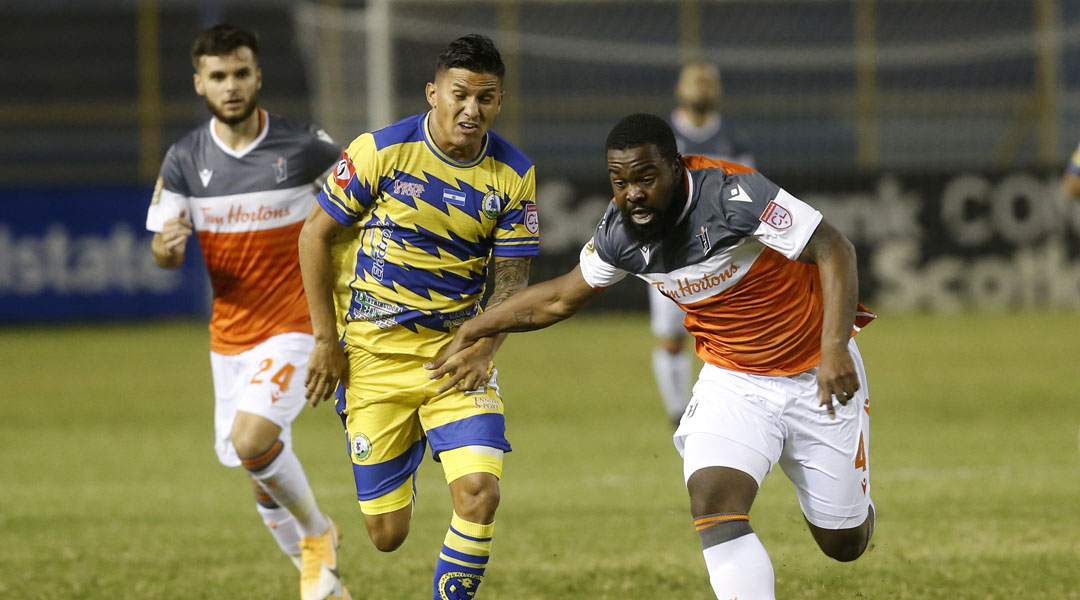 For the second season in a row, Canadian Premier League side Forge FC kicked off its Concacaf League campaign as the only Canadian entrant in the continental cup competition. Paired up in the preliminary round against Concacaf League debutants Municipal Limeno, the reigning CPL champions saw themselves reduced to men before a wonderful goal from Anthony Novak secured the side passage into the next round of the competition.

Forge FC had last played a competitive game just over a month ago when it won the North Star Shield, with Bobby Smyrniotis naming a front three of Thomas, Babouli, and Choiniere in front of a midfield consisting of Bekker, Jonsson, and Sabak. The back line was comprised of Samuel, Krutzen, Edgar, and Grant placed ahead of starting goalkeeper Henry, with the bench missing out on Chris Nanco (hamstring), Klaidi Cela (knee), and Kwame Awuah (suspension).

The opening minutes saw Forge FC kick off with a relatively inauspicious start, with Kyle Bekker letting loose a sole long shot and former Toronto FC striker Molham Babouli curling an effort from outside of the box which sailed well wide of the net.

Some back and forth action saw Munical Limeno probe the Forge FC defense, which stood firm under the initial stress test from the El Salvadoran side.

Forge began to look more lively with a lofted ball finding Bekker with a bit of space in the Municipal Limeno box, but his first touch let him down. In the fifteenth minute, a bad giveaway saw Limeno man Sanchez loft a ball to the far post, but his first touch echoed Bekker and the chance ended there.

Versatile Forge FC man Jonathan Grant – who was filling in as a right back in continental action tonight – earned a yellow in the sixteenth minute after a bad foul on Kevin Oviedo. The resulting freekick nearly found a Limeno head, but then ball sailed into the arms of a grateful Triston Henry.

Limeno knocked on the proverbial door just minutes later, with a great lofted through ball nearly finding the central run of a Limeno forward. The dangerous move forced Triston Henry to put his body on the line, blocking the resulting shot with his leg. Luckily for Forge, the ball did not deflect to a member of the opposition and the opportunity ended there.

The go-ahead goal came in the 21st minute, when a slick through ball from Babouli found the run of David Choiniere, who darted to the left and fired a left-footed effort to score the game’s opening goal:

The 23-year-old Quebecer becomes the first ever Canadian Premier League player to score in consecutive years of continental action, with Choiniere having scored against Antigue GFC in last year’s opening round. It was after that when he revealed the opportunity for continental action was one of the things that drew him to Forge FC in the first place. At the moment, he’s the club’s all-time Concacaf League goalscorer with three on the books overall.

The celebration was nearly short-lived after an odd bounce saw David Edgar forced into an awkward defensive challenge, with the veteran centre-back conceding a freekick from a high boot foul just outside the box in the 27th minute. The El Salvadoran team played a tricky pass instead of a shot, with Choiniere conceding a foul of his own moments later.

While Henry was still directing the wall, Municipal Limeno caught the Hamilton-based team completely off guard by quickly taking the freekick. With Henry on the left side of the net, the ball sailed to the right – and went just wide.

Forge FC struck back with a nice run from Babouli seeing the striker retain possession under pressure in the Limeno box, with the striker eventually firing an effort that went wide of the far side post. The Hamilton-based side would rue the missed chance moments later when their El Salvadoran opponents levelled in the 38th minute when a great layoff from Harold Alas freed Kevin Oviedo, who only needed one chance to equalize for his club on his Concacaf League debut:

A reinvigorated Limeno side came knocking in the minutes to follow, with El Salvador international Edwin Sanchez rifling in a low shot from outside of the box that forced Henry into a sharp diving save minutes later. The score was all square when half-time came, though both sides had a multiple opportunities to get ahead.

The second half saw a corner piece opportunity meet the head of Daniel Krutzen, who’d already proven himself dangerous at The Island Games. His headed effort glanced off the crossbar, with Forge FC having come inches away from a go-ahead goal in the 52nd minute.

Grant was then forced into a foul on the opposite end, with the player perhaps being lucky not to have picked up a second yellow in the process. The Limeno freekick sailed in from the right side of the box, deflecting off of Babouli for a corner.

The corner caused big problems for the Forge FC defense, with a rocket-speed header forcing a fine stop from Golden Glove nominee Triston Henry, with the Hamilton-based side hanging on by a thread as the ball bounced around the box. Babouli came inches away from a goal yet again moments later, connecting well with a deep cross from Kyle Bekker but failing to direct his aerial effort on target.

Choiniere dazzled the club members in attendance with a great first touch which freed up the space for a shot in the sixtieth minute, but the former Montreal Impact man fired an effort just wide of the post. He was substituted moments later, with Elimane Cisse replacing him. Kadell Thomas found himself concurrently replaced by Anthony Novak, with Babouli the only starting forward to remain on the pitch – though he collected a yellow right after the substitutions.

The troubling signs had been there for Jonathan Grant, who saw himself commit yet another foul in the 64th minute. This time he did collect a second yellow, earning himself an early shower in the closed-door affair at Estadio Cuscatlan. Limeno were quick to pounce on the opportunity to deflate the Canadian side even further, nearly scoring in its first big chance right after that.

Bobby was forced into a defensive-minded substitution as a result of the turning tide, bringing on 27-year-old former USL defender Jordan Dunstan to replace Paolo Sabak. Municipal Limeno continued to pile on the pressure, forcing Henry into multiple stops with Oviedo appearing to have scuffed a good opportunity that was then revealed to have been just offside.

Against the run of play, Forge FC found itself in solid possession with fifteen minutes to go, but an eventual cross from Dominic Samuel found no hammers awaiting in the box. Moments later, Babouli charged forth with Novak in support, but his through ball had too much gas to find the run of the breakfast-sausage powered striker.

Despite being a man down, Forge FC found itself earning some great opportunities in the game’s dying minutes, with Babouli putting in several moments of individual brilliance as the reigning Canadian Premier League champions pushed for a match-winning goal.

The moment of magic came for ten-man Forge FC, with Anthony Novak bringing down an aerial ball and turning the Limeno defense in one move, with the 26-year-old then volleying home a wonderful strike to earn Forge FC the win:

Forge FC will now face Panamanian side Tauro FC in the next round of the Concacaf League, which will see the Hamilton-based club play yet another single-tie away game due to the Concacaf League’s structuring during the COVID-19 pandemic – though it will need to square off against the tough competition without Jonathan Grant.

All-told, the Canadian club did well to survive plenty of high-pressure moments from a Municipal Limeno side which will find itself frustrated that its debut Concacaf League outing was ended by way of a late goal against a ten man side. Tonight’s win for Bobby’s team also makes it the first time a Canadian Premier League club has won a cup match outside of Canada.

For Forge FC, the work doesn’t stop here: the club won’t square off against Tauro until November 3 in Panama, which leaves less of an awkward gap between fixtures this time around for the Canadian side. The club will also need to square off against Toronto FC in the Voyageurs Cup Final at some point, though the date for the domestic cup fixture is yet to be confirmed.